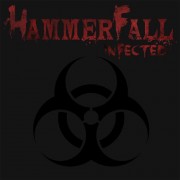 On March 18, Swedish heavy metal institution, HammerFall, premiered the track “One More Time” from the upcoming album “Infected” on Swedish public radio. But if you weren’t fortunate enough to live in Sweden on the 18th or in possesion of an actual radio, you’ll be pleased to know that HammerFall has decided to join us in the 21st century and is now streaming the track on the band’s Facebook page (link here).

“Infected” is slated for release May 20 through Nuclear Blast. Check out the track list here.