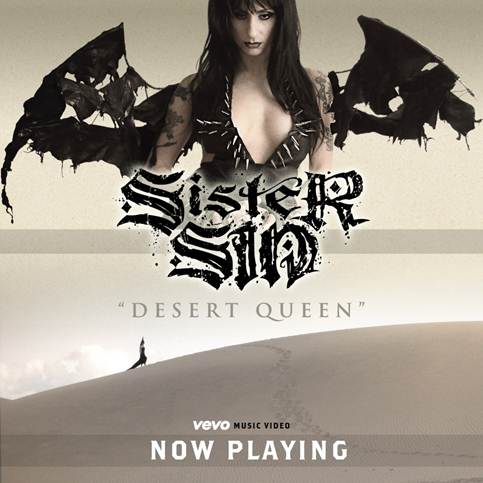 Black Lotus is certainly the finest hour to date for addictive hard rock band Sister Sin. The Swedes deliver on the promise of earlier records with a full on winner through and through. When people questioned this band’s signing by Victory Records, I knew they were missing the bigger picture. While new song “Desert Queen” doesn’t have the full on attack and most amazing chorus ever like “Chaos Royale”, Liv Jagrell and the band still deliver a classic heavy metal story  style song. I will admit I read it first as “Dessert Queen” and had face blush inducing fantasies of Liv in a Dairy Queen outfit pouring hot chocolate syrup on a Midnight Truffle Blizzard treat, but this video of the band, some witchy imagery and the impassive sands of a desert will do, I guess.

Sister Sin are in it to win it and the conviction of the band is evident in every hard hitting note and in Liv’s sultry and empowered snarl.

“We took a bit of inspiration from ancient times and aimed for a darker feeling in this video”, explains guitarist Jimmy Hiltula.  “Since the song has a dark feel to it, yet is very melodic, we wanted to capture that along with having the Desert Queen character in it.  Also, we wanted to take some focus off the band and give more room for Liv portraying this gypsy kind of woman, reading cards and being enigmatic”.  Hiltula continues on the filming, “The desert shots were absolutely crucial for the whole video and 11 Frames (producer) did an awesome job with these beautiful pictures.  We couldn’t be more excited about this video!  We have all met the Desert Queen in our lives (or eventually will), the mystery lies beyond.”

Check the video BELOW. Here’s hoping “Count Me Out” gets the visual treatment next!