Harms Way dates with Soft Kill coming up in June 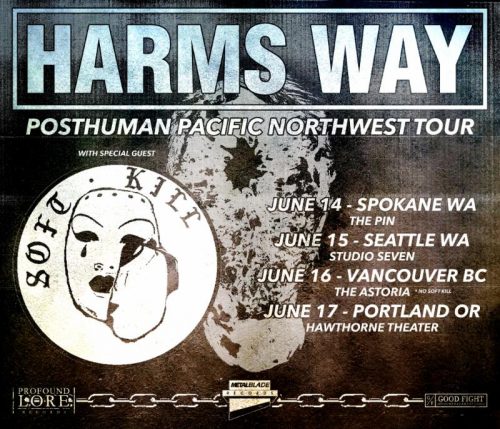 This June, Harm’s Way will head back out on the road for their “Posthuman Pacific Northwest Tour”, featuring special guests Soft Kill, before joining the final, full cross country Vans Warped Tour later that month, with Every Time I Die, Hatebreed, and many more. This is an inspired pairing of two very different bands and I would go to it in a hot second.

See below for all dates.

Harm’s Way will be touring in support of their new album, Posthuman. Having grown with each subsequent release, Posthuman is a devastating addition to the band’s catalog. “We’ve always stayed true to who we are and allowed the songwriting process to take shape organically from record to record, and as the band has progressed, our sound has become more refined with metal and industrial influences,” states drummer Chris Mills, while guitarist Bo Lueders succinctly sums up what people can expect when they first spin the record: “To a Harm’s Way fan, I would describe ‘Posthuman’ as a blend of ‘Isolation'(2011) and ‘Rust’ (2015), but it’s sonically way more insane. To anyone else, I would simply say it’s full on heavy and full on aggression.”