Harsh Times On Planet Stoked: Thanks for spending time with us in 2018. PS – don’t be transphobes 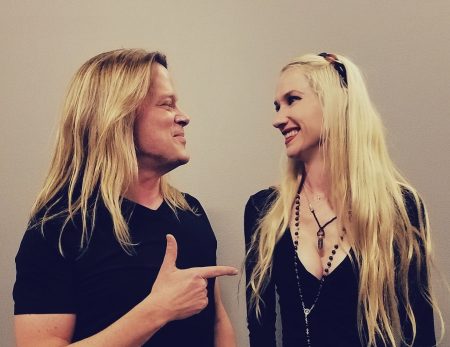 2018 was an intense year. That’s an understatement. I hope in 2019 we manage, where possible, to be more understanding to one another and foster growth. I am thinking about how much passion people carry for hardcore, metal and the like and I hope we can harness that into continuing to improve and not by gaslighting and targeting journalists who are trying to ask reasonable questions about potential ties to NSBM or sexism or other issues. I can like a band’s music but if they start doing that, it is really a souring experience.

It’s weird being a musician and a writer because your net of considerations is perhaps wider. I am not saying that as a superiority thing or in any way to diminish writers who aren’t also artists. If anything I think being a writer as well as a performer makes me side with journalists more, because they get way too much shit from a lot of bands who ought to know better (which doesn’t mean some writers can’t do better as well, trust me). Still, there are a lot of hateful little troll caves sprinkled through our fair Metal Middle Earth, so to speak. And even a few sewery Mordors. But I digress.

Or do I? Mental health was a big concern this year for myself and others. One of my favorite metallers, Jill from Huntress, was lost way too soon as she struggled with depression. Her fight was not in vain though as she inspired so many and will always be remembered.

Look, we get that some of you just wanna rock or have ‘fun’ or be edge lords. Other people use metal and hardcore as a refuge and to heal from experiencing hate. You aren’t an outsider if you are reinforcing the status quo of patriarchy, transphobia, racism, factory farming, yadda yadda. I was super bummed. for instance, to see Mark Hunter of Chimaira and Chris Barnes of Six Feet Under /Cannibal Corpse fame yucking it up on Twitter the other night making arguably transphobic jokes about educating people to be more inclusive of non binary people. Mark said he felt he was on acid for seeing a video about AFAB people who menstruate but identify as male.  Maybe, just maybe he meant that it was weird for him to get used to or wrap his head around as it is outside his cis het experience, but he didn’t call out the supporters in his comments who were saying they should be burned- which thankfully Twitter had the user remove.

Hot take. it is actually good to teach people to be inclusive of different gender identities and make them understand that different people are figuring out themselves at different times in their lives. Barnes made it even worse and wrote “yawn” when confronted about his own shitty follow up joke that sounded like a fifteen year old just heard about Woodstock.

LGBTQAI people have contributed and continue to contribute so much to punk and metal culture. Stop shitting on us with normalizing nasty jokes at our expense. That isn’t ‘extreme’ or cool or ‘metal’. It’s just embarrassing. Read the Non Binary Wiki and get your head out of a bad batch of AC/DC covers and songs about murdering girls and maybe catch up with 2019 where people are facing serious persecution. I am never listening to any of either of your music again, dudes. I hope that was worth losing several decades of support over. 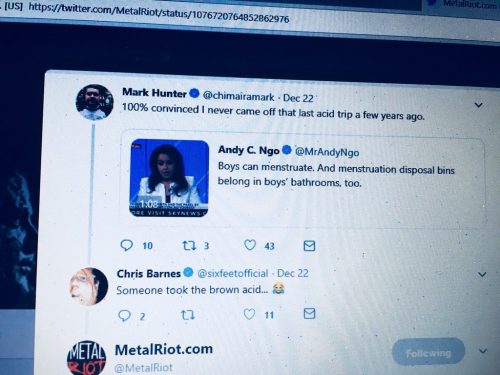 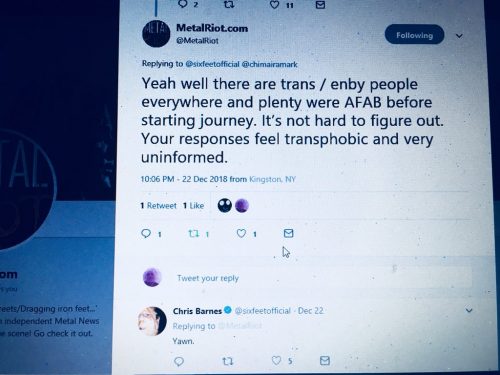 Thanks, y’all who have supported this site and who try to make the scene a better place. “SJWS” are not “the real Nazis”. Please. Let’s do better. Support Black Flags Over Brooklyn in 2019, for starters. And we will take it from there, cool? See you on the other side of the calendar, kids.

Contemplating making patches etc of this to complement our simpler ‘FUCK NSBM’ design. What do y’all think?