Haste the Day to release “Best Of The Best” 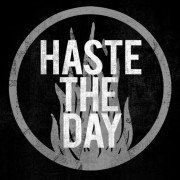 Metalcore legends Haste the Day has been fairly quite since their break up in late 2010. However,the band is set to release the album Best Of The Best compiling of their greatest hits on April 24th. This will be the first time the band releases an album since the release of 2010’s Attack of the Wolf King.

The release features “Pressure The Hinges,” “Mad Man,” “Stitches”, “Chorus of Angels” among others. For further information on this album including the track listing and cover art click here.

More News On Haste The Day: