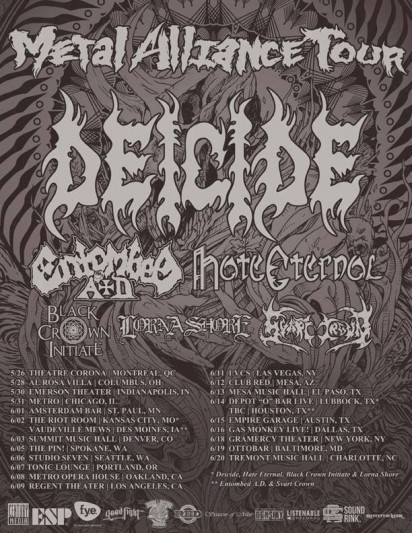 At times perhaps the most extreme death metal band in the world (when it comes to speed, insane arrangements and quality), Hate Eternal have announced their inclusion in the Metal Alliance Tour this year. The band recently signed to one of my favorite labels Season Of Mist and have new material pending.

Regarding their forthcoming album, Rutan comments, “The recording process has been fantastic so far. I’ve never felt so focused and determined on a Hate Eternal record, and I know that this will be an album our listeners and supporters will truly appreciate. It represents an important milestone for me personally since 15 years ago both Hate Eternal began recording it’s first album and Mana Recording Studios was born. We have so much more news to share with you over the coming months. We’re super proud of what we’ve accomplished creatively, and excited at the prospect of releasing what we feel is our most powerful Hate Eternal material to date.”