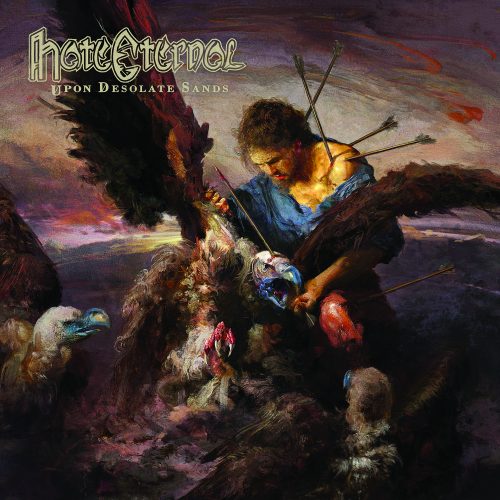 It’s been two decades since Hate Eternal came barreling out of Florida’s gulf coast. Through six previous studio albums and a number of line-up changes throughout the years, Hate Eternal has kept its vision in tact via frontman Erik Rutan. Through it all, Hate Eternal is as brutal as ever. Upon Desolate Sands is a testament to the commitment of a hate, eternal.

Check out my full review of Upon Desolate Sands here.

Upon Desolate Sands‘ opening salvo, “The Violent Fury,” slams the listener in the face as Erik growls “I am the author of death!”

“The Violent Fury” pounds unforgivingly into “What Lies Beyond,” a song about absolute apocalypse, worthy of the near-religious artwork of the cover art. A man on his knees, ridden with arrows, tending to a vulture who has taken an arrow to the head. Two other vultures look on. If the man cannot help the third vulture, or if he can, but he cannot sustain his wounds, he may yet become lunch.

The listener, on this journey through apocalyptic war finds themselves witness to vengeance. In “Vengeance Striketh” the listener encounters a group of people being protected by a “flock of angels downtrodden.”

“Nothingness of Being” is probably my favorite track, with its Nietzschean philosophical title, it’s combination punishing instrumentals and the soaring guitar as the track closes out, as well as the chorus of: “The forest of broken dreams and shattered lives // Upon the sea of trees // Lies the depth of all our sorrows // Nothingness of being // I am only a shadow of what was I // Nothing, nothing but a shell left as I.”

“All Hope Destroyed” threatens to shred the listener to pieces with its blistering opening. The journey that the listener set out upon at the beginning of the album, the war they have been witnessing, seems to have had a definitive turn of tide in this track, “I hear your endless cries as you // Writhe in sheer distress // I feel your soul now slip away into the endless dark // I sense the numbing void as it // Permeates the land // Now through me I am the vessel of the overcome I stand.”

“All Hope Destroyed” works very well as a middle track to the album. It is the longest track on the album and concludes with an adventurous instrumental, complete with guitar magic enough to fly the listener, the journeyer, over the scene, before, perhaps, the descend into the darkness of the second half of the album.

“Portal of Myriad” is a song about accepting fate, and accepting death, “Absolved of all left rendered // In the labyrinth upon the river styx // The boatman now directs your course // To the sorcery of the blessed.”

New Hate Eternal drummer Hannes Grossmann has been banging with Hate Eternal live since 2015, and leaves nothing to be desired on Upon Desolate Sands. The opening to “Dark Age of Ruin” is a place where his skills particularly stand out to me. “Dark Age of Ruin,” as a companion to “Portal of Myriad,” describes the ruin that is left: “Total collapse into a sudden end // Of unimaginable horror into the dark unknown // The old kingdom of prosperity no longer // Now degraded into complete unrest.”

The title track is a surveying of what is left: “As I meander across this desolate floor // I traverse upon the surface of decay // On a distant shore I now no longer fear // I prey for the definitive end.”

If you haven’t listened to Upon Desolate Sands don’t waste any more time!