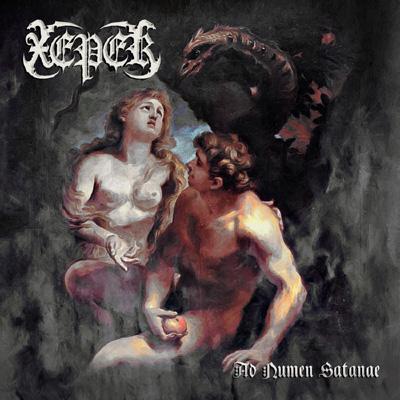 We’re stoked today to help spread the dark anti-gospel of Italian black metal act XEPER‘s new release Ad Numen Satanae. While the Garden of Eden snake on the cover art does kind of look like a lovable if mischievous missing cast member from The Land Before Time series wandered into a hot and heavy moment between Adam and Eve whilst innocently seeking a tree star, this record is actually pretty evil. Spare but crisp production meets sophisticated but molten black and coldly focused dark path passion. It is a cleaner sound than some early wave BM fans will like but to my ears it is a great blend of classic aesthetics and more sophisticated musicianship.

The album will be available on CD and digitally via Soulseller Records on February 26th 2021. The vinyl release follows on May 7th.

XEPER was formed in 2007 in Treviso / Italy by guitarist Guh.Lu, best known as a former member of bands such as Setherial or Impiety and currently as the bass player of Gorgoroth. The project features musicians from the worldwide Black Metal scene like V. Einride (Whoredom Rife) on drums, Maelstrom on vocals and guest appearances of the great Blasphemer (Vltimas, ex-Mayhem, Aura Noir), Mantus (Patria) and various others.

3. Under The Will Of Satan

4. Riding The Spiral Of Lilith

6. Snake That Brought The Flame