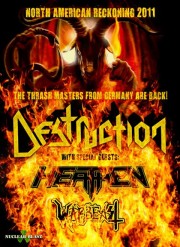 Heathen will be touring in support of their critically-acclaimed The Evolution Of Chaos full-length, which marked their first studio offering in nearly 20 years! Released in North American via Holland’s Mascot Records last year, the record reaped praise from critics and fans nationwide. “There are hardly any weak moments on the album and this is as close as it gets to a modern-day thrash classic,” said Metal Underground in a 4.5/5 review. Added About.com in a 4/5 rating: “Oldschool thrashers certainly remember Heathen from back in the day, but their return will garner them a whole new generation of fans,” while Mind Over Metal noted: “There’s nary a boring moment on the album, and when combined with strong production and memorable artwork, you have a solid contender for one of the best metal releases of 2010. The band’s current lineup includes Lum (Prototype), David White (vocals), Lee Altus (guitar; Exodus), Jon Torres (bass; Angelwitch) and Darren Minter (drums).