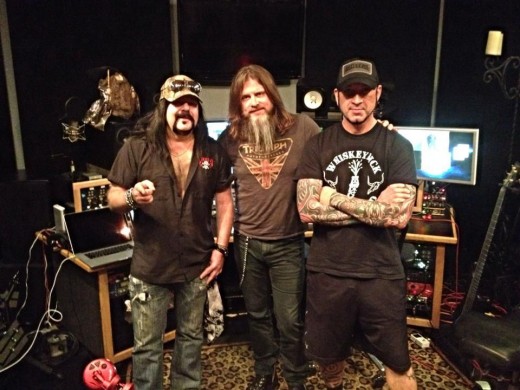 In news more exciting than my Christian Mingle profile…

…Determined to bring their fans something fresh and new, the members of HELLYEAH have hunkered down in Las Vegas, Nevada with producer Kevin Churko (Ozzy Osbourne, Five Finger Death Punch, In This Moment) and are nearing the end of an epic time in the studio.

The band, comprised of rock royalty, Vinnie Paul of Pantera; Chad Gray and Greg Tribbett of Mudvayne, Tom Maxwell of Nothingface and Bobzilla of Damageplan, has been making good-time hard rock music since its debut in 2007.   Adding a new dimension to their work, they brought in producer and collaborator, Churko.  The band’s growth and his contribution promise to make this release unforgettable.

Says Big Vin: “This record is heavy and diverse.  It was an honor working with Kevin Churko… everything we did on this record was from a different perspective.  Kevin really pushed and got the best out of us.  Can’t wait for all the HELLIONS to hear it.”

Churko: “HELLYEAH has really come into this record with a hunger. They’re putting everything they have into it. They’ve really impressed me both with the tracks they brought in and with their drive to make them even better. I think they’ll really be delivering their best record yet to their fans and they’ll be making new believers out of others. 2014 will be the year of HELLYEAH!.”

The as-yet-untitled release is due out on Eleven Seven Music on April 28 in the UK and 29 in the US. Now if only they would do a B-side cover of Skrapp Metal’s “Muff Diving In The 80’s”, I’d be super pumped. Chad could give Jeff Scott Soto a run for his $.