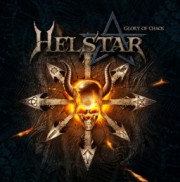 Houston speed metallers Helstar have announced the release date and title for their upcoming album “Glory of Chaos.”  The album will be released through AFM Records on November 5th, 2010 in Europe with a US release date following in January or February of 2011.  Cover art can be seen to the left.

For a full track listing and video commentary on the album click here.