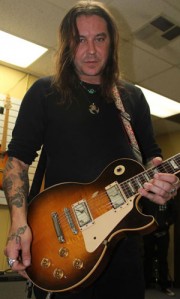 In an act of rampant douchebaggery, stoner/doom metal greats High On Fire‘s frontman Matt Pike has had one of his guitars stolen from the band’s studio in California.  Matt just got out of rehab for alcohol and released a kick ass new video too.  What a ballbust.

The band has issued the following statement regarding the theft:

“Matt Pike’s Les Paul guitar has gone missing from a Santa Rosa studio. The color is Tobacco Sunburst and has Matt Pike signature pickups and the case has PIKE written on it in large white letters. The serial number is 92462499. Please be on the lookout for this guitar. If you happen to be in a pawn shop in the bay area or see something. This guitar means everything to Matt. If you have any information on the guitar, please contact info@thersegroup.com.”