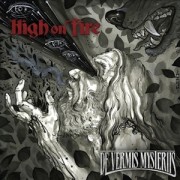 Look, we know you had shit to do tonight but you may as well forget about getting any of it done.  Our apologies, but how can you possibly resist listening to High on Fire‘s entire upcoming album De Vermis Mysteriis???  It’s streaming right here and we suggest that you ingest some serums of Liao to prepare for your dark journey as you are about to hear the most hellish secrets learnt by early man.

De Vermis Mysteriis was recorded in Salem, MA at GodCity and produced by Converge guitarist Kurt Ballou. The title translates to “mysteries of the worm” and is named after a fictional book created by Robert Bloch and made famous by writer H.P. Lovecraft.  This album covers topics ranging from time travel to a “a Jesus twin who can see the past through his ancestors’ eyes.” It has been called, “direct, eye-opening and powerfully supernatural.”

The album is slated to be released on April 3rd via eOne Entertainment and will be High on Fire’s sixth studio album and a follow up to their 2010 effort Snakes for the Divine.