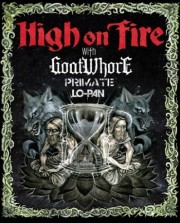 With Matt Pike fresh outta rehab it looks like stoner/doom metal greats High On Fire are finally ready to hit the road and melt some faces.  They have announced a headlining tour with Goatwhore and Lo-Pan tagging along for support.  Oh yeah, Corrosion Of Conformity will be along for the ride December 18-21, and Primate will be there November 23- December 1.  So basically you’re an idiot if you miss this tour.

This will be High On Fire’s first time on the road since the release of their amazing E1 Entertainment released album De Vermis Mysterious so don’t miss out!  The band recently released a music video for the song Fertile Green which is highly recommended if you’re stoned right now.  Even sober, it’s a pretty badass video that you should check out by clicking here.