High On Fire to reissue re-mastered debut album with extras 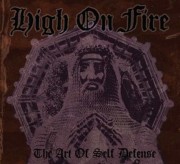 Sludgy stoners of doom High On Fire are set to release a deluxe re-mastered version of their debut album The Art Of Self Defense on Southern Lord Recordings this summer.  The reissue is scheduled for July 31, 2012 and also includes the band’s first demo, two bonus tracks from a 7″, and a 48 page booklet.

The Art Of Self Defense was originally released in 2000 by Man’s Ruin Records.  High On Fire’s latest album was released this past April 2012 and called De Vermis Mysteriis. You can read our review of the album right here, and if you haven’t given High On Fire a listen before, most definitely do..

The Art of Self Defense Track Listing: