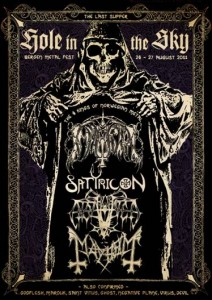 Bergen Norway’s Hole in the Sky Festival has announced the final chapter of the festival with a “Big Four” line-up of their own, adding Immortal, Satyricon, Mayhem and Enslaved to the bill.

A press announcement states: There’s a saying that all good things must come to an end. For twelve years we’ve been fortunate enough to meet many of our favorite artists, shared some incredible metal moments with fans coming from all over the world, and worked with some of the best in the scene. Twelve years is a long time and we’ve always invested a lot of time and effort in making the festival the best it possible can be and never compromise. Hole in the Sky has been a thing we’ve taken great pride in and it would be a very sad thing to let the festival suffer due to other commitments and responsibilities that comes along as you get older, so basically we want go out on a high note when we still feel inspired and on top of the game. Mind you, we will go out in a spectacular fashion. Read more

Norway has been on the forefront of extreme metal since 1991, that’s 20 years and counting, so we’ve decided to invite four of the most crucial acts in terms of developing the scene. To close the final Hole in the Sky chapter: THE LAST SUPPER, we give you Immortal, Satyricon, Mayhem and Enslaved (The Big 4 of extreme metal?).

Immortal opened the very first Hole in the Sky festival in 2000 and will close the proceedings on the 2011 festivals final day. Satyricon has headlined the festival with huge success two times earlier. Enslaved has delivered some historic sets, both the anniversary concert in 2009, featuring a wide array of metal royalty, and them playing the whole “Eld” album in 2005.

Mayhem are the godfathers of the scene and went at it in spectacular fashion in 2007. We’re glad to have them back for on final round this year.

The Hole in the Sky festival takes place August 24 – 27, 2011 in Bergen, Norway. More information is available on the official web site.