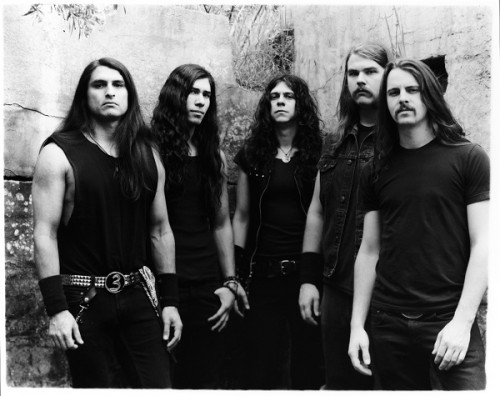 The California-based heavy metal troupe HOLY GRAIL kicked off a month-long summer tour with a mind-blowing headlining performance at Prosthetic Records’ “West Coast Metal Meeting” on Saturday night in suburban Los Angeles. The show marked a return to the road for the group, who have spent the past several weeks tracking the as-yet-untitled follow-up to their critically acclaimed 2013 effort “Ride The Void”with Grammy-winning producer John Spiker, with an eye toward a late fall release. Stay tuned to the band’s website (www.holygrailofficial.com) for updates.

HOLY GRAIL are no strangers to pounding the pavement in order to spread their powerful riffs and infectious shred across the continent. The quintet has previously shared the stages with acts such as Anthrax, Exodus, Amon Amarth, Dragonforce, Orange Goblin, Municipal Waste, Hellyeah and Blind Guardian, just to name a few. The band has also appeared at some of the heaviest and most popular festivals worldwide including Download (UK), Loud Park (Japan), Soundwave (Australia) and Wacken (Germany). In addition to their previously announced summer tour dates, the group has just announced a handful of additional shows; see below for details.

Featuring a blistering dual lead guitar attack and powerful vocals by James Paul Luna (praised by Decibel as “the finest metal singer of his generation”), HOLY GRAIL burst onto the scene in 2009 with their debut EP, “Improper Burial,” which led Metal Hammer to call the group “one of the most promising traditionally-inclined metal bands to emerge from the U.S. in the past decade.” It was quickly followed by “Crisis In Utopia,” which Revolver praised as “a nearly flawless full-length debut that ecstatically revives undiluted, straight-up metal in all its gauntlet-clad glory” and named one of the 20 best albums of 2010. “Ride The Void” — hailed by Metal Hammer as “full-blooded, forward-looking, classic heavy fucking metal” — followed just over two years later. More information on the group’s new album will be revealed in the coming weeks.