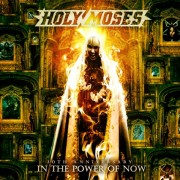 German thrashers, Holy Moses, have released another song entitled “Def Con II” off their upcoming album “30th Anniversary – In the Power Now.” The album was recorded in Absurd Studio in Hamburg, Germany and will include new versions of 20 of the most important songs of the 30 years the band has been together.

The new album will be released April 20th in Germany, on April 23rd in Europe and on May 22nd in the USA/Canada through SPV/Steamhammer.