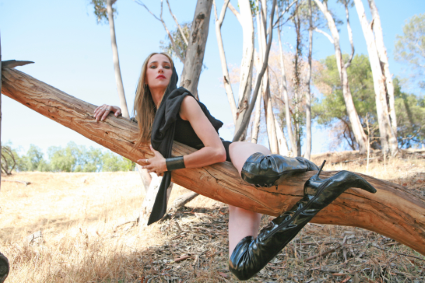 In a time when metal and rock fans seem split between compassionate human beings and those who accept trolling and bullying or outright violence (as in the freshly raging Deiphago controversy and the idiots who are anti-Kim Kelly as some “SJW Anti-Christ” types), I am as always inspired by Jill Janus and her band Huntress. From the start the band just came out co-ed and no apologies roaring and while Jill was often not taken seriously enough for her looks or called gross names, she continued to forge ahead and play to bigger and bigger crowds alongside her bandmates.

I’ve wanted to communicate with Jill for years now and while I was sad to learn that Huntress had to cancel their September dates because Jill is still resting after BEATING CANCER (see that positivity, young witches and warlocks?!!), it was cool to learn she grew up near Oneonta about an hour from I live. Let’s go to the Iroquois Museum sometime, Jill! It’s really amazing!

Anyway, Huntress have made one of the years best ragers with new album Static. From the assertive vertigo of “Mania” to the strong title track, it is a ruler. You can find out all about it as we discuss crystals, cool hashtags and troll slaying BELOW. 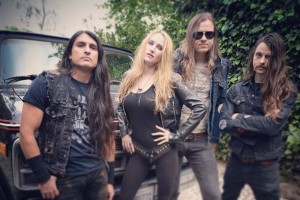 Please excuse my (truly friendly) boldness but you complete the triforce of
my awesomest biggest rocker lady crushes of last ten+ years and are my last to
interview. I am so stoked. Loved your stuff since CGirls. You have always
seemed SO funny and versatile and sincerely out to have a good time AND make
people psyched. Huntress seems like the vehicle you were born for or shed skin
and stepped into. It was waiting for you to manifest it. Ring true?

Wow, you have been following my attack for a long time! That’s very cool. It’s nice
when someone “gets it” and understands or relates to my journey. Yes, it’s
manifested. I have visualized everything for Huntress and all aspects of my
life since childhood. Living for your purpose is the only way, otherwise you
don’t live. That’s how I feel about it.

Let’s get this out’ve the way…how are you doing? I was so
worried for you last month or so as a fan. My beloved dad died of Cancer in
January (miss so much) and I was like please Kali/Shiva don’t hurt one of
my favorite rocker warrioresses ever! #fuckcancer #harshtimesonplanetstoked
#youareaninspiration

Let’s add #clitboner to that #hashtag party! I’m sorry for
your loss, death is devastating when cancer is involved. Thankfully I’m now
cancer-free, I had a hysterectomy which removed a small tumor. I’ve kept my
sense of humor through it all, but waiting to return to the stage has been the
most difficult, I can’t sit still, I’m uncommonly active. I had to be a
warrior and tackle this shit aggressively or it would’ve attack me harder.
Surgery is brutal, it’s life changing. 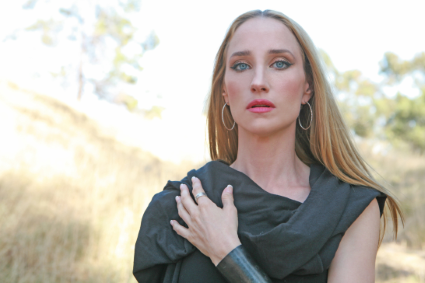 I liked the crystal references in “Brian” that I thought I heard
you sing about. Are you into crystals? If not, I was up til 6 AM talking philosophy and music with Daveigh Chase (Samara from The Ring, lol) and now am writing you these questions. Please excuse me if you didn’t sing about Crystals but you prob like them anyway, haha

I’m obsessed with crystals, I’ve collected hundreds since childhood. And Brian does bring me pockets full of the most magical gems. He’s a friend, an old wizard with wild hair that he calls his antenna to the Universe. We share a torture in our brains, some far out mental connections that inspired me to write this song about him.

Hope to get to meet you and the boys at Poughkeepsie show. Is there a
different feel to your west coast vs East Coast shows. Sad I missed your Vitus
stop a year or so back. What was your first heavy metal record as a child?

I’msuper bummed about not playing the Poughkeepsie show in September. Huntress had to bow out of our tour with Avatar and Gemini Syndrome due to doctor’s orders. I still need a month to heal properly. I grew up in Oneonta, NY so I was pumped to play close to home! There will be many more shows to come in Upstate, I’m sure. My first heavy metal record was Suicidal Tendencies Controlled by Hatred/Feel Like Shit…Déjà Vu. My favorite band since high school. And I get to share the stage with them on the Motorhead Motorboat cruise Sept 28 – Oct 2!I’m hoping I don’t dork out too hard on Mike Muir.

Say hi to Ross The Boss for me. DeathDealer is playing that as well. The new Huntress record is so good. It has the metal side but you’ve also
really matured in the rock side. Your vocals and singing sound more confident
than ever. I dare a hipster snob to shit on this. I’ll fight them, lol.

How was it making the “Flesh” video? Your videos are so imaginative
like Ghost or Queens Of The Stone Age, you always know it’ll be a trip.
Plus of course you are a mega babe witch rocker cosmic saintress.

Ha! Hipster snobs can suck it. I don’t ever let trolls into my world. But yeah, this record is expanding beyond the realms of metal. We chose producers Paul Fig and Jim Rota because they could take us to the next level. It’s our heaviest and catchiest album. I’m really proud of my vocals and lyrics, and my band mates songwriting has evolved beautifully. The lyric video for “Flesh” came from my twisted mind, I gave the storyline to Vance Kelly, who’s worked with Huntress since Spell Eater. He illustrated my ideas and it became a very
special, dark fairy tale. 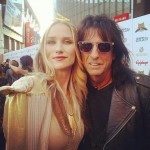