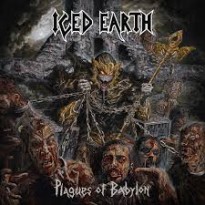 Tampa metal band Iced Earth have premiered the song “Among The Living Dead” off of their upcoming album Plagues of Babylon. The album is set for release on January 21, 2014 in the States via Century Media.

Plagues of Babylon will be Iced Earth’s eleventh studio album and a follow up to the bands 2011 effort Dystopia.