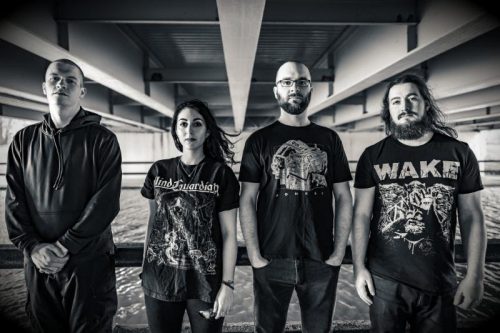 This grotesque track comes off the band’s upcoming album Thrive On Neglect which will be released on July 5 via 20 Buck Spin.

“This was the first full song we wrote together as our current configuration, and we’ve been playing it together for almost two years. Finally having it recorded and released feels like a significant step. Lyrically, this one is more ‘political’ than the rest of the material on the album. I’m not trying to be indirect by using metaphor, but I also don’t want to limit people’s perspective by being overt. With the ‘eyeless, glowing grubs…sickly white, dying still…choir of weakened gasping…,’ I’m not saying that I was thinking about certain people who occupy positions of power in this country but… Actually, that is what I’m saying. ‘They’ll tell you this is how it has to be. Abandon hope and worship apathy.'”

Immortal Bird are heading out on a two-week tour starting today. Check out tour dates as well as “Vestigial Warnings” here.