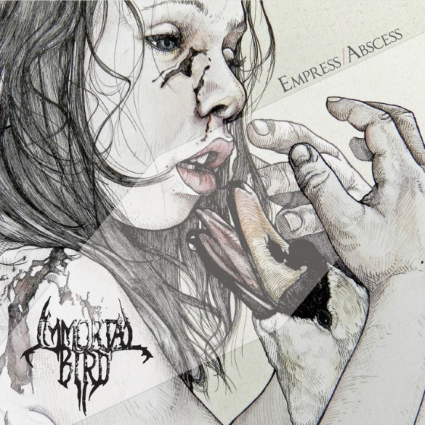 Listening to Alunah’s “Scourge & The Kiss” and waking up gradually after a fun O+ Festival last night where I played w Dead Empires and saw a few other good bands around my city of Kingston like The Grape & The Grain and Lara Hope &The Ark-Tones. Anyhow, this struck my eye as must share info, as Immortal Bird are amazing and have one of the year’s best releases Empress/Abscess. It definitely has the coolest cover art of 2015, imho.

Plus, how cool to see the I.Bird play alongside the homies of Landmine Marathon and the Brothers of the Sonic Cloth at SWTF? Fuuuck!!!

Chicago’s IMMORTAL BIRD will kick off their headlining takeover next week. The band’s latest journey – which follows their recent and successful Summer excursion — will commence on October 12th in Denver crumbling the stages of over a dozen venues through nine states including an appearance at this year’s Southwest Terror Fest(Sleep, Brothers Of The Sonic Cloth, Dropdead, Bongripper etc.) in Tucson, Arizona. IMMORTAL BIRD will be joined by Colombian Necktie as well as Metal Blade recording artists Secrets Of The Sky on select dates.

Offers vocalist Rae Amitay of IMMORTAL BIRD‘s latest live adventure: “Our East Coast tour was our first run of dates since Empress/Abscesswas released and we had a blast. Louisville Deathfest and Death To False Metal Fest were awesome and we can’t wait to get out there again for Shadow Woods Metal Fest in September, as well as a more extensive West Coast tour in October. During the latter we’ll be playing Southwest Terror Fest before we’re joined for about a week by our pals in Secrets Of The Sky. We’ll also be visiting several new cities for the first time. Lots to be stoked about!”