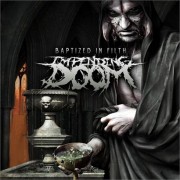 California death metalers Impending Doom have released the video for their song “Murderer” off of the new album Baptized in Filth. You can check out the video here.

Baptized in Filth will be the band’s fourth album and was produced  by Andreas Magnusson (The Black Dahlia Murder) and Machine (Protest The Hero, Lamb of God).

Impending Doom has also confirmed for this years Metal Alliance Tour along side acts like Devildriver, Job For a Cowboy, 3 Inches of Blood, and Dying Fetus. The band will also be playing select dates on this years VANS Warped tour this summer.

Baptized in Filth is due out March 13th, 2012 via E1 Entertainment.