Incantation back with Relapse, Bandcamp streaming past releases 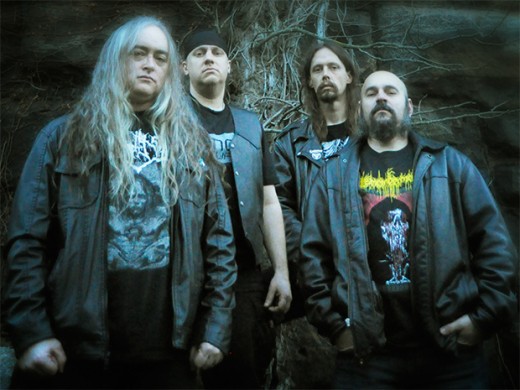 Relapse Records is extremely proud to announce the re-signing of legendary death metal pioneers INCANTATION! The band, who originally signed to the label in the early 1990s and released some of the most influential extreme metal albums of all time, including Onward to Golgotha (1992), Mortal Throne of Nazarene (1994), Diabolical Conquest (1998), and The Infernal Storm (2000), has come full circle to reunite with Relapse for its forthcoming 10th studio album. INCANTATION, an institution for over 25 years, remains hands-down one of the most important, influential and consistently regarded artists in metal, and the band’s new material is sure to be no exception.INCANTATION’s entire back catalog is now available for streaming via the band’s Bandcamp page AT THIS LOCATION.

The band is currently recording its upcoming full-length at their own Incantation Studios in Johnstown, PA. The album will be mixed and mastered by Dan Swano (Bloodbath, Asphyx, Dark Funeral) and is expected to be completed in February with a release date slated for this summer. Upon completing the album, INCANTATION will head to Europe to tour with Morgoth, Darkrise and Omophagia. The band has also been confirmed for this year’s Obscene Extreme Festival in the Czech Republic and will announce dates and festival appearances shortly.

INCANTATION members John McEntee and Kyle Severn commented on the re-signing:”2016 is off to a great start for Incantation Death Metal!!! We are extremely excited to announce that we are returning to the Relapse Family. They were there a quarter century ago when Incantation and Relapse were both starting their careers, so to be able to come full circle and release our 10th studio album with them is truly amazing and we are looking forward to the release and touring this record later this year!!!!” -Kyle Severn

“Yes it is true we have returned to Relapse Records. Over the last 8 years we have been working with them on various projects with great results. It’s awesome to start a new chapter of the band going back to our roots and working with the label that believed in us back in 1990 when we were still a demo band. It’s great to work with a label that still believes in us in 2016 and still believes in the perseverance of real death metal.” – John McEntee

“Incantation are one of the true pioneers of American death metal and their unwavering dedication, consistency and longevity is unmatched. We are proud to welcome them back to their original home.”  – Matt Jacobson