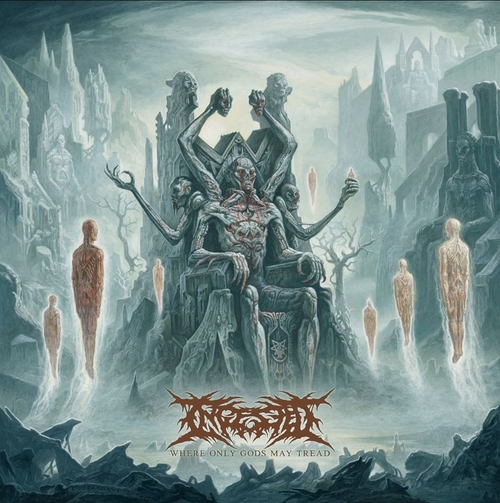 British death metal ballers INGESTED have unveiled a lockdown video for new single ‘Dead Seraphic Forms’, and announced the release of new album Where Only Gods May Tread on 14th August via Unique Leader. A new lockdown video featuring thirty eight (phew) cameos of bored metal musicians goofing around in quarantine can be consumed below. Expect much intense riffing and clowning.

Drummer Lyn Jeffs comments “So, here is our second single ‘Dead Seraphic Forms’ from our upcoming album Where Only Gods May Tread. We’ve put together a lockdown music video and brought a load of our good friends for the ride, and we want you involved too! All you have to do is name as many people as you can in the video in the video comments below, then like this post and share it on social media! We will pick a winner at random from the people who name the most correct cameos and they will WIN A PRE ORDER BUNDLE FOR THE NEW ALBUM! So what are you waiting for?! Watch the video and get on this competition!! Big love and STAY SAFE X”

The new album was mixed and mastered by long time producer of INGESTED and Cryptopsy guitarist Christian Donaldson (Despised Icon, Beneath The Massacre, The Agonist), engineering was handled by both Nico Beninato and Sam Yates at Foel Studios in Wales. The artwork was created by legendary artist Dan Seagrave (Morbid Angel, Suffocation, Hypocrisy, Entombed, Rivers Of Nihil, Gorguts, Decrepit Birth).