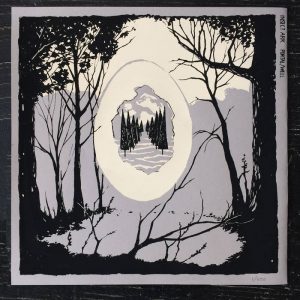 Insect Ark is one of my favorite experimental outfits. I think founder Dana Schechter is pretty much a musical genius and we were thrilled to run this interview with her about the original release of the album back in 2015.The project  started as a the one-woman solo project of bassist/multi-instrumentalist Dana Schechter (M. Gira’s Angels of Light/Bee and Flower). In January 2015, Portland-based drummer Ashley Spungin (Taurus) joined on drums and electronics and they have been gigging here and there ever since.

Portal/Well is finally available as of a few days ago, with a two color silkscreen on archival grey paper. The vinyl LP is being released by Sleeping Giant Glossolalia Records, artwork updated by Nicole Boitos Hayworth.

Says the band of the new artwork:

Nicole Boitos built the original egg diorama out of a real goose egg for the CD version, (which also featured photos by Simple Box Construction), so it was natural to ask her to illustrate the variation for the LP. The results came out beautifully.