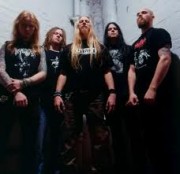 Insision will release a 23-song collection of rare older and live material The album is slated for release in May under Sevared Records and will be engineered with the help of Anders Eriksson at Off Beat Studio in Stockholm. Insision are also currently writing material for a new album due out later on this year.

They have been quoted as saying, “The new material sounds like a mix of the complex stuff we did on our first record, ‘Beneath The Folds Of Flesh’ back in 2001 along with rhythm parts that can be explained with a more darker approach. We don’t want our listeners to wait too long for a new record; therefore we’ll release this collection for the fans that are into brutal death metal. Hope it’s worth the wait.”