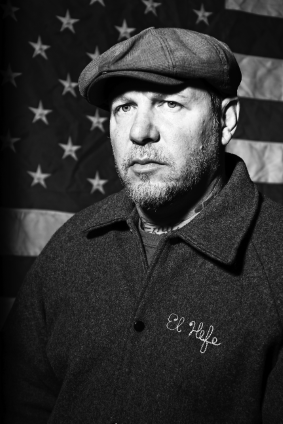 On The American Dream Died, Agnostic Front vocalist Roger Miret -even so many years into the classic NYHC band’s tenure- has delivered maybe his most vocally succinct set of lyrics on an album ever. The focus of the energized social blast’s recalls the band’s early lightning rod heyday as well as more recent forays into melodic, working class punk. And fret not…crossover fans need only listen to the rampage of “Test Of Time” to hear the metal influence that landed the band props from Kirk Hammett of Metallica on his Fear Festival this year.

It was great to talk to Miret about the record, on current events like “Police Violence”, real patriotism, welfare, Edward Snowden and how NY is the “Greatest city in the world, but it just don’t feel the same”. Plus MUCH more. “There’s no justice/it’s just us”! 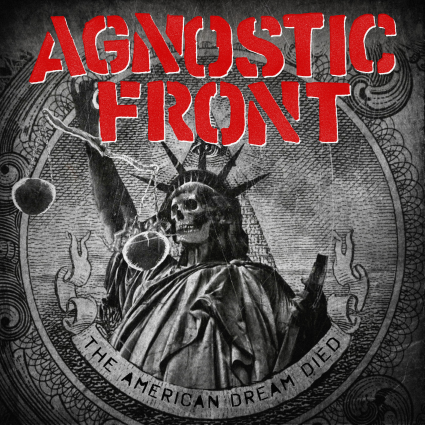 The new Agnostic Front record is so timely and one of the legendary band’s best records. Yeah, I said it. It has songs like “only in america” about pro veterans rights but also “no war, fuck you”, for example.

“Like you, I feel that it’s very current,” Miret says. “Very relevant. It’s pro-American, fighting for our rights, justice and liberty. It’s a statement of individual American who seeks all their rights. It’s a shame people go fight for the government -whether we are in agreement or not – and then come home to be abandoned. They were putting their lives on the line for what they thought was their freedom. And in many cases it is. I just think the wars we’ve been in recently, particularly the Iraq war, we should’ve never been there to begin with.”

Roger and I briefly talked about troops on the ground vs drone strikes. Obama and the New York Times piece on his “kill list”. There’s debate amongst Americans and other countries that Obama says he wants to feel the responsibility of his choice to give a kill order but people feel the US Government skew numbers low by naming most people a combatant within a drone strike kill zone instead of being more discerning.

We also discussed spying and how while post 9/11 we  info gather allegedly for “safety”, the truth is we just want to know everything. Big brother IS watching, beyond a doubt. If you know history you know the quite progressive bastian of hope, The Nation magazine has been under watch by the US Government for decades. Spying on US citizens shouldn’t have been a shocker. I mention to Miret that Obama said Ed Snowden is not a hero but do we think they really are gonna revise the data collection system like Obama said, to make it more fair? I mean, if you watch the MUST SEE documentary Citizen Four , during “terrorist” spying they were getting economic info on other countries that perhaps wasn’t anything to do with Terrorism.

“Yeah, well thats what I mean,” Miret says. “Little by little civil liberties get erased. People, say whatever…but I’m glad someone did tell us what’s been going on. People will have mixed feelings if he’s a hero or traitor. Who knows? I think it’s great we really get to get a truth. Always it’s seeking a truth, in some form, someway. They are
always hidde by an agenda. When truth is said or served, that’s what Agnostic Front has been about our whole career. Somebody wants to twist your words, y’know?”

Some people have different access points to political truth that skews their “values” or perceptions. Like a soldier might be fed a lie and that isn’t their fault. They are trying to be patriots.

“Absolutely. I have family that are military and a police officer,” Roger insists.  “There’s a good in everything. Some of them are into serving for our freedom, but they don’t get all the information. They do as instructed and think they are doing right. But those who lose a limb or sight, they are considered not worthy anymore.”

Think of Tom Cruise in Born On The 4th Of July.

In Oakland my friend Jon The Baker’s punk venue got raided all the time, just cuz it was crust punks and cops hated it. And at the same time, I’m hoping the NWA movie doesn’t make crime or police on profiled black violence escalate and that we can chill the fuck out in America. Like Ice Cube says ,”NWA was non-violent protest.” The staggering abuse and profiling of Blacks in this country is further tears shed by Lady Liberty at our Nation’s hypocrisy of slavery and racism. It also sucks when innocent police are shot.

“That’s not my message in “Police Violence”. To judge a book by it’s cover, people will assume we hate cops. But it’s about corruption and abuse. The visual stuff you see is horrible,” Roger states, emphatically.  “A 58 year old guy was bodyslammed and paralyzed. This is the shit. It’s not he said she said. It’s footage. They get away with it. They don’t want
lawsuits. If you’re gonna act like a criminal, point blank you should be treated like one. That crime in New York where they shot the two cops was awful. That’s not what I’m trying to state.”

As a white ass skinny dude who listens to Kendrick’s “King Kunta” almost daily lately, I am all for the unity vibes. And for being proud of your history. I love the lyric “The Big Apple Has Lost Its Taste” on this record’s sure to be a live standout “Old New York” and tell Roger that it’s a killer line.

“It’s true, man. If you listen to the clip before it, from my all time favorite Taxi Driver, it says some day a real rain will come and wash the scum off the streets. How true was that?,” Roger asks. “Yeah there was crime and drugs and prostitution. Some sad and bad elements. But it created this intense musical scene from your Ramones and on. Artists. Everybody was so alive and witnessing real genuine, passionate stuff. It was beautiful. NY now is depressing. It’s god damn Disneyland. It’s as plain and boring as I don’t even know what to tell you. It’s happening in a lot of cities.”

Giuliani is back in the news lately saying Obama hates America. I asked Miret what he thought about that, since Giuliani politicized 9/11 so grossly and Miret has sung “Giuliani, fuck you” numerous times.

“Big time, though maybe for once in his fucking life he’s on to something, “ Miret says, sadly. ” Ed Koch came in with a mission to clean New York City up and it’s been downhill since. Giuliani sped it up the most. I don’t even know how Giuliani hasn’t been murdered. He was a prosecutor for all the mafia. I don’t even know how he got away with it. Who knows what’s going on with these puppets on some levels. We will never know. As far as Obama, he saddened me. For the first time in my life in 2000 I could vote. I became a citizen. And the first thing he did was get Hillary Clinton in his cabinet. He was talking about getting rid of the Clintons and Reagans and Bushes. He was gonna close Guantanamo in 90 days. It’s still open years later. Maybe he has his hands tied. I’m sure he does. But man, people really wanted this change. There’s so many people I know that voted for him that are so dissapointed. I don’t want to vote anymore. He was gonna make a change from corrupt Republicans and Democrats and Wall Street,  and then just hired all these people back on his fuckin’ team.” 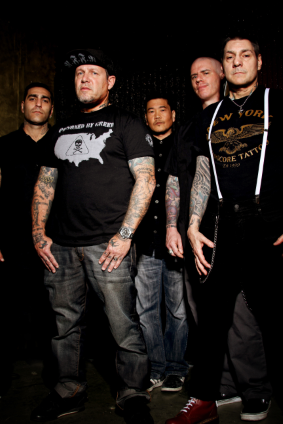 In Afghanistan, on Vice/HBO they showed recently how we are spending so much money on military equipment for them. Billions. Much is broken. But we spend so much on military expenses even for othr nations and NOT for OUR own infrastructure.

“Look at Detroit, right here in America. How horrible it is. You watch it deteriorate to garbage,” Roger says. “There’s no money to help but you give $40 Billion to some other fuckin’ country that you lend military weapons as well. You know how that’s gonna go! It doesn’t take a fucking rocket scientist to figure that out. Help the people at home that could use that money. Make Americans feel good about being alive. Families are deteriorating. It’s sad to watch.”

I pestered Roger if he can once and for all state how he feels about welfare.

“People need to think about different aspects of it,” Roger says. “For instance the blood testing for drugs to stay on the welfare system, you should be able to go take that test. If you have children, I don’t really give a fuck, step up. It’s true. I watch people not give a fuck about kids and it saddens me. There’s people who can use welfare and who really need help. If anything you want everyone on the same page. The intention of Welfare was always great, Roosevelt came up with it. But like everything else, when it becomes abusive that’s a nightmare. But also as much as if you truly need it you should be able to take a test if you need to. And I’m happy when they are going after deadbeat fathers sometimes. Leaving hopeless women in bad situations? Fuck them. These deadbeat dads have to go.”

I ask Roger finally what it feels like to sing a new song like “Never Walk Alone” or “We Walk The Line” about the hardcore scene and how it feels looking back.

“When you think of circle jerks, dead kennedys, early hardcore…bands I grew up with and I love them. But for some reason as soon as the NYHC came to be, people took to it. It’s that one scene that built the bridge world wide. That song is about how we’re in it together. “Never walk alone”. That’s why I picked my brother, Lou and Toby to sing on this record. They are super passionate and still making music,” Miret says.“And “We Walk The Line” is that one song about this is what we did, how we do and still do it. The cool thing is it’s a very old school song lyrically and musically.”