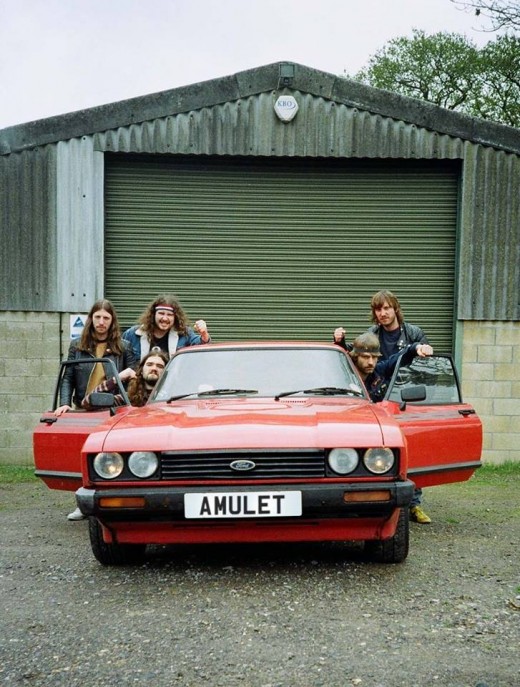 Few bands rock as lean and mean as London’s Amulet. With a throw back metal sound and a killer debut The First out now, it was time for Metal Riot to speak to vocalist Jamie Elton about their stubborn style and influences. 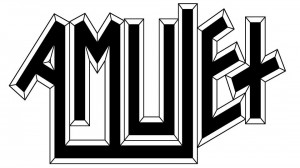 What impression do you want to leave from The First? This band sounds mean and lean.

Right on! Well, we never do anything with the intent of how others perceive us, let’s get that straight. This is OUR heavy metal album, born from our desire to write stomping riffs and exciting rock music, if you like it great, if you don’t… Leave the hall, or don’t haha We couldn’t care less! We know that this album is 100% us, the sound of 5 British born and bred heavy metal enthusiasts doing what comes naturally to them. To Amulet that has always been what’s most important, heavy metal is all about being yourself.

The most powerful Amulet in metal I think is “The Eye” from King Diamond’s album of the same name. Agreed?

There are plenty, I’m sure Iron Maiden would consider Eddie somewhat of a lucky charm, and with that in mind Metallica were once called “Leather Charm”. It’s certainly a commonly occurring theme in heavy metal. In relation to the King I’d say that the Evil Eye (whether casting, or protecting from evil) is a highly regarded mystical power, so yes you might not be far off…

In recent times we have heard Darkthrone embrace more operatic classic metal vocals through a punk-death aesthetic, had Christian Mistress reach much acclaim deservedly or had groups like The Shrine or even the death metal band Vampire push a very raw sound. The vocal clarity and the tones of the leads are some of the only hints your record wasn’t tracked in ’86 or something. “The Gauntlet” in particular is spot on classic metal. What appeals the most to you about older sounds? You may have familiar heavy metal tropes but the songwriting is what matters and that is good.

Blimey, where do I begin… It’s really not hard to explain actually, everything about 70s and 80s music appeals more to us than today’s garbage! We are lucky that there are still a handful of bands and artists (not just heavy metal acts) who are worth listening to today, but generally their roots can be found in “the good stuff” of bygone eras. Simply, we love that sound, that vibe, that production, that look, that attitude of being in a band back then, and the no nonsense quality of music from this classic era! It’s no surprise that everybody worth their salt today is being influenced to some degree, it’s the golden age of rock music!

“Glint of the Knife” made me think of the recent claim that DNA has proven who Jack the Ripper really was. Think it is true? What about bloody history attracts you? So much grief, madness and poverty.

I must say that I’m no expert in these historical events, although I find such things fascinating, “Glint of the Knife” was my own abstract take on the Jack the Ripper theme. As a London band we love the grim history of our great city, it’s something we touched on in the demo (song “The Hangman”) and wanted to do that in the album too. I think you can definitely expect more of this in the future! 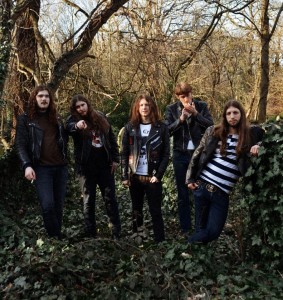 How did Century Media become interested in the group’s music? Any bands on the label you were particular fans of?

They heard our demo cassette, liked the band, we were formally introduced, had instant rapport and then kept in contact. A little while later we found ourselves signing our lives away to das German uberlords. They really understand what we are about, and have been incredible so far, it’s amazing to have their support. 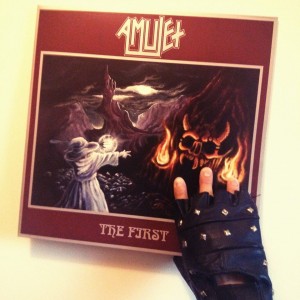 “The Flight” has a real 80’s sci-fi movie soundtrack feel. Did you take shrooms and lock yourselves in a closet and watch some classic cuts like Excalibur or something?

Yep, it was a wild night! Dave Sherwood On Drums came up with this one, and played it live in one take!

Is Nippy Blackford a Christian name?

He certainly is NOT Christian! But yes this is his real name, and possibly the most English sounding name you’ll ever hear haha! Since joining the band Nip has greatly improved the sound and general attack of what we do, he’s a real musician and a real fucking shredder! Nippy by name, nippy by nature.

“Trip Forever” has the immediacy of early Motorhead and the song is one of several that has a short, punk rock duration of just a few minutes. Do you feel compelled ever to 7-minute or more heavy metal excess or is it fair to say Amulet likes it short and sweet in general?

We generally focus on keeping our tracks from getting boring (to us), so if it means cutting the fat and keeping things moving then usually the result is something around the 3 minute mark. The last couple of tracks we wrote were the 2 longest on the album, so we will never say never to a bit more of an opus. We know that as a band our strong points are not necessarily our technical abilities but more our ear and consideration of a well constructed song, so we spend the most time “tweaking” our songs once they are written. You should never be scared to go back and re-write something if you think you can improve it!

Any message for the hipsters who need direction in their aimless lives?

Nope, let em’ rot. For those who really know what it’s all about – defend the faith! 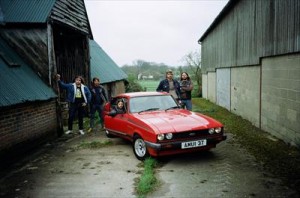