Brooklyn’s Bezoar are easily one of the most interesting New York based bands, splashing more color (and booze) on the metal scene with psychedelic waves of sludgy power trio goodness. They have shared the stage with Pentagram, Hull, Jarboe and Prostitution among others and create a heady brew of classic, mystical riffage colliding head on with an avalanche of modern stoner rock vitality. At times humorous, cathartic and prolific, this band is top notch.

MORGAN Y. EVANS: Ok! Let’s start the aesthetic. I really love the whole vibe of the band. There’s a lot of bands out there in the same scene as you but your band really gives off this sort of oddball mysticism that seems less forced than some bands. Did you do some weird rituals when you founded this project or what? What did you set out to do, initially, and has that changed at all?

SARA PALMQUIST: (bass,vocals) Initially we just set out to make good music! We all come from different backgrounds and each brought something different to the table. Tyler grew up with a lot of punk and hardcore influences being from upstate New York and all… I (Sara) grew up in Minneapolis and went to music high school where I studied world music and performance art which sprung an interest in noise and avant garde genres. Justin grew up in upstate New York as well where he was an aspiring baseball player, but a shot gun injury left him unable to compete. From there he became obsessed with the drums and to this day is a power house behind the drum set. I think we all are ready for a new wave and aspire to creating something new and interesting while keeping our influences intact. As far as things changing, we just change with the music as our abilities and desires mutate.

MYE: Tell us about the new record you are working on. What is the story? What can we expect? Where are you tracking?

SP: We are super psyched about our new record! So far we only have released a 7 inch, so this will be our first full length release. We tracked it in our new venue called The Pentagon which will be opening up full force this summer. One of our best friends Dave Liles tracked it and will be mixing it in May. No release date yet…We need a label! Plan on sending the tracks out this June

MYE: I was really blown away by the band live when I saw you play with Jarboe and Hull last year at Union Pool. I always love a good power trio and your sound was huge.

SP: We will remain a power trio! I think it’s best and the most challenging line up for us. It keeps us on our toes.

MYE: What are some of the most interesting experiences you’ve had in the band via the music taking you someplace or creating adventures for you via touring?

SP: Tour is always an insane adventure and it is our favorite part of being in a band. Meeting people and playing music every night in new places is an experience every band should have. We have definitely had to suffer for the music as any band in Brooklyn has. At one time we lived on our school bus for six months in order to save money for the band and acquire the bus. Alas the “Cool Bus” is now scrap metal somewhere, but we keep on goin’. Now we have a little Mystery Machine to cart us around the country. My favorite tour story is meeting this crazy toothless guy at a truck stop in California who collected exotic animals. We met his pet chimp who was sipping a big gulp in the passenger seat of the guys pick up truck.

MYE: Are you making that up?!!! How was it playing recently with Pentagram? Were you gassed up or what?

SP: Playing with Pentagram was amazing! Our adrenaline was so high we weren’t even nervous. It was a highlight for sure. 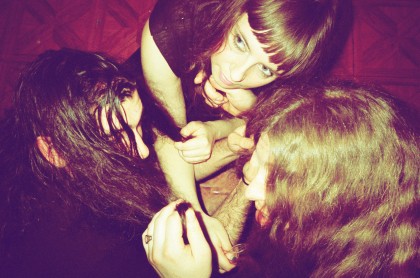 MYE: This is one of those times where I feel kind of like I am going to think of something elusive I want to ask you all later and kick myself in the dick, but I am trying to be present and go with the initial things that come to mind here, because of the sort of vivid imprints of feeling your music and the memory of seeing you live has had on me. I guess along those lines, how much are you all channeling things that have influenced you and how much is this sort of a search via sound? Do you just sort of let yourselves go with the music or is it a conscious effort to bring about a specific experience?

SP: We really want people to feel a rush when they hear our music. We hope to give people a refreshing take on what music is and can be. Our influences are important to us and we respect all the bands that have opened doors for future musicians; at the same time we strive to create new sounds and experiences for the audience. What we create is about what we like but we also keep our audience in mind in the writing process. Many friends and fellow musicians have given us constructive criticism and we listen…sometimes. Ha!

MYE: The current state of heavy music and even the weirder sort of mellow but harsh pagan folk scene and stoner rock, etc. or black metal and ambient seems to be really cool right now in that, while there is a lot of hipstery fetishism or fly by night stuff, I think a lot of genuine craft and real expression is happening. Your band definitely embodies a real thing, like a force of nature! Do you think it is cyclical, that as things get more co-opted or convoluted that there will always be some people who react and sort of build their own little scene or thing?

SP: The state of music and the psychology behind group mentality and ‘scenes’ could really be a college thesis! There is so much behind this question, but as far as Bezoar goes, we really try not to be concerned with what scene we belong to or if what we are doing will be accepted in the scene we seem to be affiliated with. This can actually pose as a problem at times, but it just feels right. I don’t think any of us have ever wanted to be associated with a specific group or ostracized from any either. You know those kids who have cool friends, nerdy friends, druggy friends, jock friends, etc. Those are the kids we were in school and that has carried over into our adult lives. Bands will always start something and when that said thing or genre is accepted other bands will follow. Some of those bands will be awesome and others will just feel lifeless. I’m not sure where we fit in this equation, but there is a heavy music scene happening right now and we are stoked to be a small part of it

MYE: What are some other things the band members are involved in these days (or just any cool shit to tell about NYC?). I feel like there is still a lot of good stuff going on in New York if you look for it. Great bands like Made Out Of Babies, Batillus, Bezoar!

SP: As I mentioned before, we have a venue in Greenpoint Brooklyn called The Pentagon that will be blowing up with shows and dance parties this April/May.. Wizardry is Justin’s other band and they slay! I play saxaphone in K Holes and we just released our first record on Hozac, May 1st. The amount of shows and bands happening here is endless. I think there are 30 bands where I work alone and that is only one shop in Brooklyn!!

MYE: What is Bezoar’s patronus charm animal if this was Harry Potter? A baby goat? Have you ever tried an Irish Bar Fight (Jameson, Bushmills, Paddy’s mixed shot)? Do you like cookies? 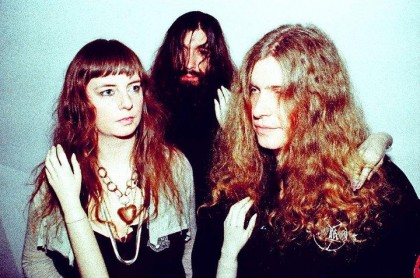