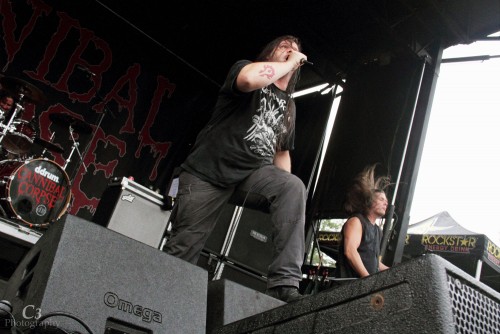 Paul Mazurkiewicz, drummer and some believe mastermind, of death metal kings Cannibal Corpse has done a lot in his lifetime. Now he can check being interviewed by Metal Riot off his bucket list. This is my second time interviewing someone from Cannibal for the site and the band always manage to startle me with their sheer professionalism, friendly attitudes and focus on often being the best Death Metal itself has to offer. I mention that A Skeletal Domain‘s cover art and album name, kind of like Evisceration Plague, creates a mood of entering a horrible world in some dark story.

“The title sets the mood, in a weird way. We wanted something that was gonna be more thought provoking, eerie, sinister, dark and creepy,” Paul tells me via phone.“We really feel we are working harder than ever at all aspects. Pat writing almost half the record. Rob, the two that he wrote are awesome songs, and the four that Alex did. They’re great Cannibal Songs. I don’t know what the answer is. It’s what we got. We got A Skeletal Domain. I don’t know if it is arguably our best work, but I feel that it is.”

How was Mayhem Fest? You guys were definitely the heaviest band besides Wretched.

It was fun. I think we had a good turnout. We seemed to go over well. Played in front of a lot of people who didn’t know us, for sure. That’s the kind of reason you do a show like that. Kind of expand the fan base, y’know. Get more people seeing the band or what have you. Pumping the new record. We had fun. Lot of great bands. Great vibes. The tour was a success.

That’s the thing. You’re doing what you do, regardless of where you do it or who you do it in front of. We think most people who know death metal know who Cannibal Corpse is, but let’s get some other people into it. Maybe they will become death metal fans too. As long as we keep doing what we do, who cares? Festivals, Juggalos. A lot of people freaked that we were gonna do that. Are we not Cannibal Corpse anymore? I don’t understand. 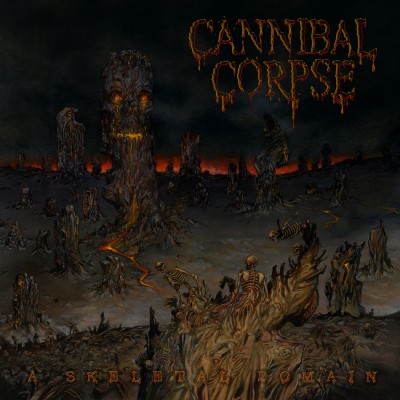 Any song takes on this you were really psyched about?

The title track, “A Skeletal Domain” is one of Pat’s best riffs ever. It’s driving, classic sounding. The way we recorded, we didn’t go for any one take
or fast takes. We tried to piece together the songs more so this time. We concentrated on getting everything solid. If we had to do it again we did
that.

“Headlong Into Carnage” is pretty rad. You’ve been doing it a long time. As a band you probably want to try different approaches and see what the results yield.

That’s the thing. Evolving as a band. See what works better. I think it went extremely well and I was happy with the final product. “Headlong…” yeah, that will be fun to play live. I’ve got a lot of fills going on. 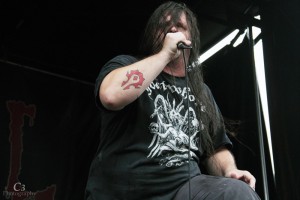 Do you mind telling us about the new book?

It’s called A Bible Of Butchery, Joel McIvor did it with us. He’s gone books with Metallica, Queens Of The Stone Age. He approached us when it was coming up on 25 years and we thought it was a good idea. WE talked to Metal Blade and they thought it was a good idea. We started compiling all of this stuff. Let’s have a coinciding release with the new CD. It’s not as nostalgic of Centuries Of Torment, but it is focusing more on now and the five individuals. This is the most solid line-up we’ve ever had. The DVD covered all the ex-members. There’s a lot of stuff about us, great photos and stuff that’s covered in the book, that most people don’t know. We wanted to print up some of the inspirations and some of the things we wrote. I think it’s a cool book. It’ll be cool to have on the book shelf for some Corpse fans.

Is the debate boring about death metal being good or bad for society? Lord Worm of Cryptopsy fame recently told Decibel it used to just be him and you guys talking about serial killers. But the news in general was so horrible at times, recently.

I think people just don’t get it. They are getting it more. Back in the 80’s metal was shunned in general. Then you ahd thrash and death metal, forget about it. It was the end of the world. People just aren’t into it. They can’t understand it. Extreme music has been around. If anyone is gonna say anything, they are fighting a losing war. Death Metal is here to stay. Look how popular it is now, where you have a tour like Mayhem Festival for Extreme Music. Thousands of people coming. everyday. It’s bringing people together. It’s a celebration. Getting aggressions out. Some people are never gonna understand us. “Why must they listen to those sounds” (laughing). They have no choice. It’s the loudest that it’s ever been. 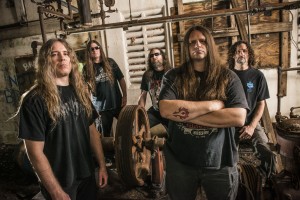