Interview: Cavalera Conspiracy’s “Pandemonium” – This is the fall of Rome 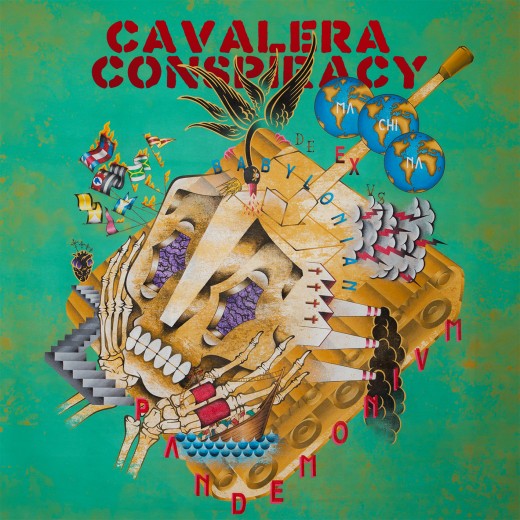 Cavalera Conspiracy’s Pandemonium drops November 4th and it is a bold injection of street-wise thrash adrenaline into the bloated heart of music and society (Pre-order the album on Amazon.com.)

“I take it seriously with every record. I don’t get out of the studio unless I am happy with it,” says metal legend Max Cavalera about this third collaboration with brother Igor under the Cavalera Conspiracy banner. “We try and make the fans happy by working hard. I try to make the best record I can make.”

Where Blunt Force Trauma and Inflikted were heavy studio low end killers, Pandemonium is pure, rip roaring chaos. This feels as close to being in a metal riot as anything we have written about on this site. Pure speed, a raw approach and some of the most guttural and at times even industrial/death sounding vocals from Max.

Nate Newton of Converge/Doom Riders lends hoarse screams to “The Crucible” as a vocal guest (and plays bass on the whole record like a beast), put the real core of the album is the ferocious pandemic of Max and Igor blazing with their best feet forward, determined to give the fans a real experience of speed and adrenaline in 2014. Throw in the craziest leads I have ever heard from Soulfly’s Marc Rizzo and you get an explosion of reality. Between this, Savage Messiah, Iron Reagan and the new Exodus, I really can’t complain at all about thrash this year (though I’m pretty sure this takes the cake, in my book).

Max Cavalera and brother Igor prove that they still have the metal fire burning in their hearts as strongly as they ever did in the early days as world music ambassadors in thrash legends Sepultura. I hadn’t talked to Max since the days I was writing for the now defunct Crushermagazine.com and it was great to ask him how excited he is that Cavalera Conspiracy has grown into its’ own thing since Inflikted and is not only solely in the shadow of the brothers’ varius Sepultura-eras.

“Yeah, it’s great. I’m very excited Pandemonium is going to come out and getting ready for a big year of touring for that,” Max tells me over the phone this morning.

I tell Max that I love how music for him seems to stem from the same place of honest appreciation, no matter what style he is doing. Some critics can say he has changed over the years, but they are missing out on a great journey if they dismiss any era of his career. A new song like “I, Barbarian” will also shut up any critic who thinks Max can’t still write some of the heaviest and best music in the world (unless they have shit in their ears).

“We had fun making the record. I wanted to make a record with Igor that we played back to basics. The brothers playing fast again like e did when we first started,” Max admits. He sounds in a good mood and is happy to talk about the process. “It seems like a really simple idea but is really effective. The flow of the Pandemonium record relies on the brutality of the songs and the thing was to show us and the rest of the world that we can still do exciting stuff with really aggressive metal. It was exciting making the record and I really enjoyed the process of the Pandemonium idea. I’m very excited for it to come out.”

Igor Cavalera these days spends a fair amount of time as a DJ, but I am betting the level of bounce and high tribal energy on Pandemonium could appeal to dubstep kids as well as thrashers eager to rage. The rhythms are just so flipped out and hyper. It reminds me of how Soulfly or even someone like Manu Chao are so fun live because they focus a lot on making the whole crowd move and feel like a unit.

“We just wrote how we felt. the record was really done in a kind of crazy way,” Max explains in his famous, gruff and accent thick voice. “I took all my favorite fast riffs that I’ve written in December of last year and brought all of them to the studio. I let Igor and Marc pick some. We even let Marc start soloing right at the beggining of some songs. “Insurrection”. He’s really good at doing that. It’s good to hear Marc doing stuff like that. All of us really had a lot of fun in the studio creating this thing. “Babylonian Pandemonium” is probably my favorite song I have written in the last ten years.”

“The video shows the rotten side of Brazil that nobody sees it. The belly of the beast,” Max grunts. “The World Cup shows tropical beaches and rain forest. Underneath all that there’s really a rotten side. The street people in poverty. That’s what we wanted to show.”

It is great to see the real South American culture represented by bands like Eminence and Noturnall and other artists like Max and Igor really caring to represent it. My girlfriend just introduced me to the music of her friend Adriana Cavalcande (Adrika), for example. So full of life as well as real world experience. 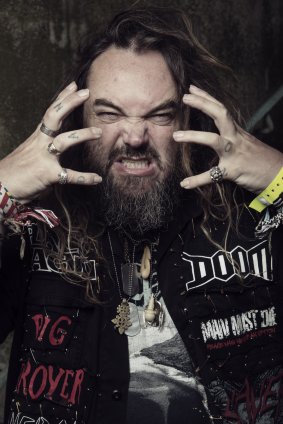 “We are proud to be Brazilians but we wanted to show the side of Brazil that people don’t get to see,” Max says. “I wish the director had the time to go to all the cities and film, like Rio. That’s where City Of God is from and I love that movie. Get more hardcore images of favelas. But we didn’t have the budget to do that. So we did it in Brasilia, which is a strange city. It did capture some really great footage. Also, the album cover is a beautiful masterpiece for the record. I’m really happy with it. The cover, it’s like the music. It’s powerful but desperate at the same time. There is desperation of the skull holding its’ face. The factory and crosses, like religion is manufactured these days. All these hidden messages that you can find on the cover. I think it’s very cool.”

You have critical thinking and animal ferocity all in one record, the instinct of adrenaline and the need for survival. Max wants fans to use their brains but the music also will whip you into a frenzy of wide eyed sixth sense.

“Some of it was really inspired by listening to heavy ass stuff like Noisem, Nails, Trap Them, Full Of Hell,” Cavalera tells me. Max is always paying attention to newer bands and for years through Soulfly’s many guests or by taking cool bands on the road, he has been a solid source for someone who is in touch with the beating heart of the metal underrgound.  “One of my favorite songs is “Scum”, which could be a grindcore song,” he adds. “Starting with Nate’s distorted Converge bass. Excorcising the demons in the studio. It felt good, man.”

One of the more intense parts of Pandemonium finds Max bellowing that “This is the fall of Rome!”

“I love history. Very bloody, brutal and violent periods of history like Carthage was good to write about. “I, Barbarian” or “gladiator” are some of my songs that reflect that,” Max says.

We still have bread & circuses but instead of gladiator pits, now we have direct tv.

“Yeah. We have that and ultimate fighting,” Max laughs.“Even the mosh pits now, it is like being a gladiator in fucking Rome, man. Some of the stuff now, I’m glad I’m not out there. That looks dangerous as shit, man. They are killing each other but they are having fun, so what the hell.”

What keeps Max touring still? Is it records like Incite’s awesome Up In Hell keeping alive the legacy of seeds planted long ago, or just the unquenchable need to travel?

“I am more comfortable in a tour bus than in my house. I lvoe touring around the world. I could tour forever and wouldn’t care. I like my house and everuthing but touring is really where my heart is. I want to tour a lot for next year with Cavalera and Killer Be Killed. Hopefully record with Soulfly so we can tour some more. It’s all about the touring, man,” Max says. “I am just thankful for the fans. Killer Be Killed was a great record. Also Savages for Soulfly, to work with Terry Date on that, what a great producer. He gave me the best sound I ever dreamed on a record. Also my son Zion got to play drums on that record . That was a dream come true! And to also have Cavalera Conspiracy, which is more kind of home style. I produce it, it is always more underground and it is more back to basics for this band. They are all different from each other but all of them have very powerful material. I hope I can continue this creativity and the vibes going. This is my commitment to the fans not to let them down, because I’m a fan myself.” 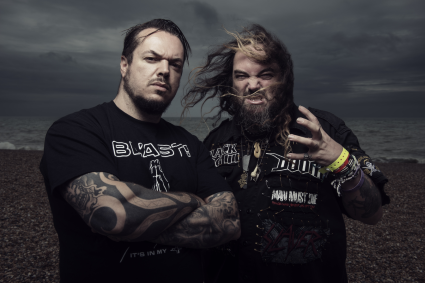