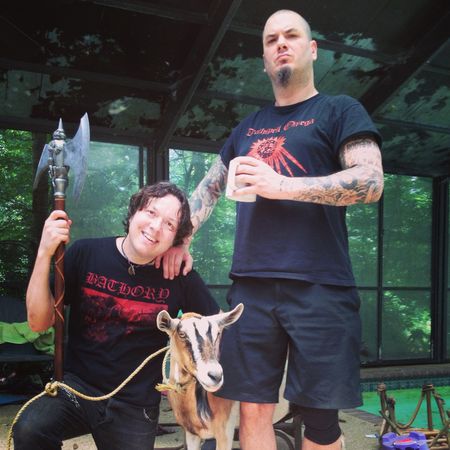 Metal Grasshopper is the comedy gold mine of heavy metal themed hijinx between Down‘s Phil Anselmo and comedian Dave Hill. The popular series was dreamed up by Hill along with former Supagroup mainman Chris Lee (a distant relative of Bruce Lee’s who happens to also be married to Sean Yseult of White Zombie/Star & Dagger fame).

With Episode 5 “Vulgar Display Of Feelings” was just released yesterday, it was high time to get the scoop from Chris about working with Dave and Phil on this hysterical series. If you don’t like it…walk on home, boy! 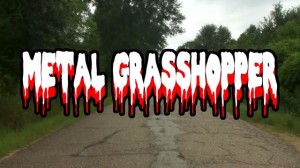 I was watching these the last few days and laughing my ass off. It’s been awhile since I talked to you about your old band Supagroup and
I’m glad you’re back involved in some music related comedy stuff. What bar was that where you are bar tending in one of the
scenes? I saw your cameo.

Chris- That is The Saint (In New Orleans).

Oh, isn’t that the place you and Sean (Yseult) used to run?

Yeah. Me and Sean’s old place. So we shot it there. It felt good to get behind the bar again.

It was kind of weird. It really was (chuckling). I was like ,”Wow, I forgot about this.”

One time when I saw Down they covered Van Halen. Supagroup to me was like the modern punk version of Van Halen, if such a thing could exist. So I bet you and Phil had some common interests.

Yeah, you probably think this too, but I think most metal dudes started with Sabbath and Van Halen and AC/DC. So even though we weren’t metal, metalheads could appreciate what we did.

And you had a good sense of humor. I was watching “Sexy Summertime” the other day and thinking ,”this is gonna be my song
to play through the cold New York winter.”

So how’d this come together with Dave Hill and Phil Anselmo. I know Phil had a lot of depression for awhile, so it’s great to see him enjoying life again and being fucking hysterical again.

He is one of the funniest and kindest, coolest people. It was the germ of it. I kind of got to knom him after all the shit went down with his depression and the drugs.

Yeah, and Dimebag. So, Sean is super good friends with him cuz they toured since forever. She’d say ,” The Phil I know is the funniest motherfucker.” And that’s the guy I got to know. SO luckilly I got to miss that other stuff. I thought he was a natural and said ,”if you want to do something funny, let’s do something funny.” Phil said (in gruff Phil voice) “Yeah, I’m down with this. Let’s figure it out.”

I was working in New York and on my off nights I would hang out with my comedian friends, one of whom was Dave Hill. We’d get talking separately about making a video for Funny Or Die or making a TV show. We didn’t have an idea. Dave is a fuckin’ shredding guitar player, in real life. So we came up with the idea of getting Phil involved. Heavy metal and karate kid. It was a drunken night. Phil would be Mr. Miyagi and Dave would be Danielson.

It reminded me of that Supagroup record where you parodied martial arts imagery.

The Enter The Dragon poster. Yeah, I guess I have the same joke I keep telling. At least it’s a bit different this time
(laughing).

Dude, there’s so many funny parts in this. How did you keep a straight face when Phil says ,”What in the untrimmed toenails of Ian Astbury is going on?”

(laughing) I feel like he was trying to crack us up. It was really hard to keep a straight face. The next time would be like “What in the ruby red lips of Paul Stanley” or whatever. Crazy and different. So he’d walk into a scene with a joke and we were like ,”OMG, I’m gonna laugh” and it’s the top of the scene! Good stuff.

There must be some outtakes you can’t even use (laughing).

Yeah, we’ve got a shitload. We’ve been discussing doing an outtake reel. We’ll see if I can talk my editor into that. 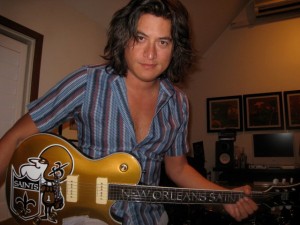 My favorite part of Dave Hill is when he is talking in his sleep and says ,”Shut up, Lars Ulrich! You cock tease!” (laughing)

(cracking up) I know. Dave is so funny. He’s so good. And him and Phil together…they have these two weird energies that go well together.

I think goats with band logos on them is a great idea! I’m sure some kids would try to mail order them.

(laughing) Totally. It was a really good time. Fun to make. We shot it in four days. We had the Adult Swim guys with us. A lot of those guys, most of the staff that were writing for Adultswim.com, they all used to work at The Onion. Joe Randazzo who plays the psychologist in episode 5, he used to be the head writer at The Onion. Even when Dave and I wrote it we’d ask Joe to have his writing team give us ideas for the flash cards. Bam, the next day they’d have forty jokes. 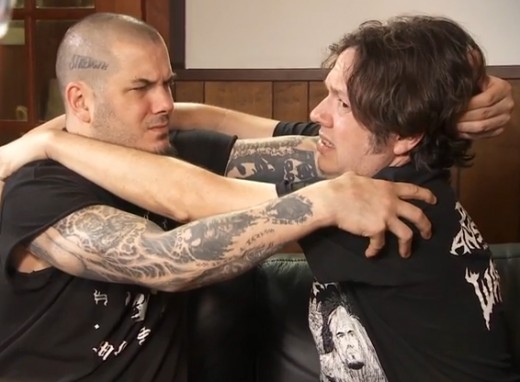 It was fun being a New Yorker and they are talking about Jamba Juice and can’t decide if smoothies are metal or not.

A lot of the stuff that made it in was stuff that was not scripted. They’d get on a tangent.

Were you trying to parody the Some Kind Of Monster therapy scenes with the “psycho therapist” part?

I haven’t seen that movie since it came out. Was it similar?

Ahh, just in a shrink trying to make metal guys hug (laughing). But it got Metallica back on track, so whatever.

The back story to the therapist thing, we didn’t write that. We knew we were gonna let Phil say what he wanted. We’d have an A-B-C and D kind of scene and have them fill it out. “Phil, in this scene you have to teach Dave how to sing” or whatever. When we got to the first goat scene, we were gonna have a different goat but then Phil just started going off on how this goat was his Grandma.

Where’d he get the name Fallen Tower? It’s like some weird Tarot shit (laughing).

I don’t know! It just falls out of his mouth. So once we decided to go with that, we decided the goat would be kidnapped and they’d go to therapy. I asked Joe who was on set if he would be the therapist and he was like ,”Fuck yeah.” Turns out he’s a bad ass city trained improvisational comedian. That was just luck. Phil kind of planted the seed and we were lucky and had people to execute it.

Yeah! He was a big fan so he knew that shit.

What’s up with The Chris Lee Band? Still doing that?

You know, I never intended to take it out live. We just did two shows. I wanted to see what it was like. I’ve been honestly working a lot. The back story is, I wrote a record and it’s kind of political, social justice. A Neil Young kind of thing. And then I wrote a script. SO it’s really a musical. It’s not anything I ever intended to be a band full time.

A Chris Lee  rock opera. I wanna see it.

Not one where everyone bursts into song, but more like Purple Rain where it is about an artist so it makes sense people are singing (laughing). I’m working on it. It’s pretty much done and I’m hoping to get it produced.

I hope so. You’re great in front of or behind a camera. You’ve got a personality that bridges gaps. Like Anthrax, they can be goofy as fuck but still be real with fans and on the level…for example. You are similar in that aspect. Honestly it keeps rock more popular than always having someone screaming in their face.

How many episodes did you film?

Number five just came out and the last one is out soon. Six total. If there’s enough demand I’d love to re-edit it and have a forty five-fifty minute thing. If enough people want to buy it I’d love to do a DVD.

Any news on Sean’s band Star & Dagger you can share? Are they still playing with Dave Catching from Rancho De La Luna?

They are writing now and I think talking about doing some shows in New York and Toronto next summer. Hopefully they’ll have something new to put out. Dave came in as a producer and filled in on guitar for them, but now they are playing with Johnny Hotwheels who played in my solo project and Rock City Morgue and John Gray, who drummed for Rock City Morgue.

Awesome. That band was cool. Well, thanks man. One last question. Did Phil actually make Dave so all his yard work?

That was amazing acting but…we had a lot of fun with that shit. On screen Phil was like being too mean to Dave. I needed the arc to be that he doesn’t like him then he likes him. But for awhile he was just slapping him around (laughing)!

Phil would start giggling when we said cut. There was a lot of camaraderie. It does seem real, right?! I’d be like ,”Wow. Holy shit. Phil, don’t hurt him.”