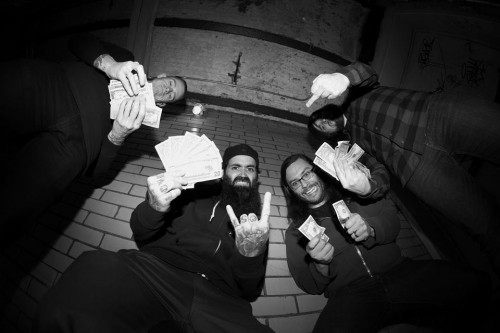 Cleanteeth will blow your ass away with experimental leaning, sludgy hard rock and more attitude than Wyld Stallyns on steroids. Remember how Manowar claims “other bands play, Manowar kill”? Cleanteeth are kind of like that, only nothing like Manowar. This Brooklyn based outfit remind me of everything right about underground metal, from a devil may care attitude (I mean, they have an electronic type interlude track called “French Kissing Alexander Hamilton”) to a clear appreciation for bringing the rock n roll hard.

Stream their whole debut Pushing Rope HERE. I especially recommend blasting the Unsane-worthy subway car screeching to a halt on your face yet also melodically inclined riffing of their track “Stay On Target” (maybe the heaviest song I have heard yet this year). This band should be on your radar in a big way in 2014.

To read an interview with Guitarist/Vocalist John McKinney click HERE. 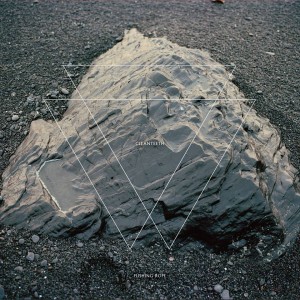 I love “Blame Canada”. Almost has a doomy Helmet/Hum feel to me but way darker/post hardcore as well. It is cool you start the record with an ominous and restrained tempo track. I feel like every band these days starts with a rapid fire thing that burns me out by the fifth song.

John McKinney (Guitar/Throat): Thank you!  Yeah honestly, I think that is a symptom of the ADD way music is consumed now.  In order to ensure a successful record, you kind of have to hook people in with the first track to get them to actually pay attention since you can very easily hear 15 seconds of a song and then say “next band please, Spotify” and forget what you were listening to forever.  It used to be that the “hits” were like track 4 or 5 or even later on an album, but now its like “go hard out of the gate and hope people get hooked in.”  The difference is that Cleanteeth doesn’t really give much of a fuck about anything, so we put things in a dynamic order that makes sense to us.  Also, I think you are the first person to compare us to Hum, and that excites me sexually.  You’d Prefer An Astronaut is one of my all time favorites.

Well, sometimes we write about shitty bands but we try and focus on only cooler bands like you guys.

Honestly, we try very hard to not take ourselves too seriously lyrically, because almost everyone in the metal genre does that.  This band is all about an expression of how we act as people, so the song titles reflect that I guess (meaning we are idiots).  But, when you get down into it there is actual meaning beneath the idiotic varnish.  “Shitbreather” is a song about how southern preachers control the masses, and “Sexual Mustache” is about severe mental illness and suicide.  We just choose to express topics in a more lighthearted way, I guess in the same way that George Carlin could always say something hilarious but simultaneously profound. But like I said, we are idiots, we aren’t George Carlin. 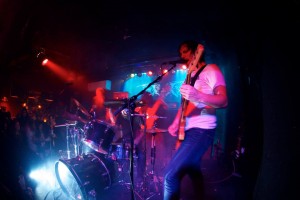 That’s cool Jamal Ruhe mastered this. He is my friend and real talented, for a wise guy. Stoked. Record sounds poppin!

I am pumped on being stoked!  That dude was amazing to work with, super easy and did a great job.  He was recommended by Alap Momin who recorded our record, so we felt it was the right move.  We definitely would go to him again.

What is your favorite Horror movie? Why?

We had been talking about doing a concept piece about the sci-fi horror masterpiece Event Horizon, but then I went back and re-watched it for the first time in like 10 years and realized it’s actually horrible.  Like, holy shit that movie really sucks.  So I guess back to the drawing board.  My personal favorite horror movie would be 28 Days Later.  I really like Danny Boyle’s work. I love the soundtrack to that movie, and I love how that movie totally fucked up the “zombie” genre by introducing fast zombies.  That’s the only movie that has really crept into my nightmares.

I hear like deconstructionist bluesy shit in your riffs.Thoughts? I love the clanky and bellowed, workmanlike intro to “Can’t Stop Til The Casket Drops”. What appeals to you about thus sound? You remind me a bit of cool bands like Shiner, Nolan Gate, Mule, Tar especially but heavier. Not so much exactly musically as aesthetically not giving a fuck about a commercial sound versus wanting to be awesome. You gotta do some shows with Tidal Arms!

Hell yeah that’s pretty accurate I would say — we love to take influence from everywhere and mash it together so that we find it interesting, and whatever happens happens.  A lot of times, we’ll write a riff that is vaguely reminiscent of some band we all love and then fuck it up.  I personally have played almost every genre of music there is from death metal to sad bastard country to operas and symphonies, so you can definitely find odd influences buried in there.  I like the word “deconstructionist” that is a good way to describe our approach to writing.

Also, I’d love to do shows with Tidal Arms, I keep hearing about them (I think they share a space with some of our Brooklyn friends). 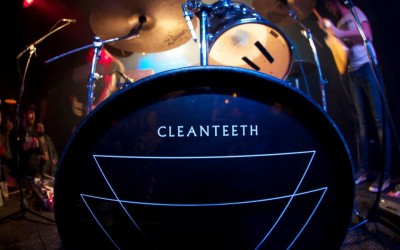 Cleanteeth is a great band name. It reminds me of appearances we try to keep in society as chaste or good when really everyone is a creep on some level. David Lynch knows this truth.

Hah! You should have heard some of the other band names we went through before settling on that.  There were some winners in there.  But yeah, we opted for something more against the grain than “Black666 Deathgrinder” or some overused bullshit.  Although now that I’ve said that, it might have to become a song title…

Yeah, I might name my next band that. What is the craziest part of being in this band? I bet you all injure yourselves like Slipknot (haha) when you have to play “Stay On Target”.

Well fortunately we wear helmets and masks like Slipknot when we play, so we’re protected.  The craziest part to me is that we still manage to get asked to play shows when we constantly show up with like 95 amps and blow out everyone’s ear drums.

Do you feel the underground has come back strong with a vengeance? Seems like there are a lot of good bands right now.

I honestly, genuinely do.  Even though the music “industry” is a big pile of dog shit, it finally is starting to feel like there is a music “scene” again, at least in New York City which is awesome.  That was where all the good music came from 10-15 years ago, local scenes with great venues and awesome bands feeding each other ideas.  Brooklyn is full of amazing heavy bands right now that are really pushing the envelope, and we’ve got great places to play shows.

What are your goals for this band? Are you gonna be heshers and drop off the face of the earth after one good record and be involved in a murder/suicide? Or is cleanteeth here to take names?

I’d say we have 2 main goals right now: my number one goal with this band is to play at Roadburn.  It is my favorite festival on Earth and I’ll be going back for like the fourth time in a row this year.  I’d love for us to hit that and tour Europe.  We also are working on putting together some west coast dates hopefully later this year, which would be another check off the ol’ bucket list.  We’re also writing for a new record called WHØLES, which may be an EP or an LP, that we’ll hopefully get into the studio this summer to track.  We may still do a couple murder/suicides along the way, but to be trvly metal, you gotta do what you gotta do.