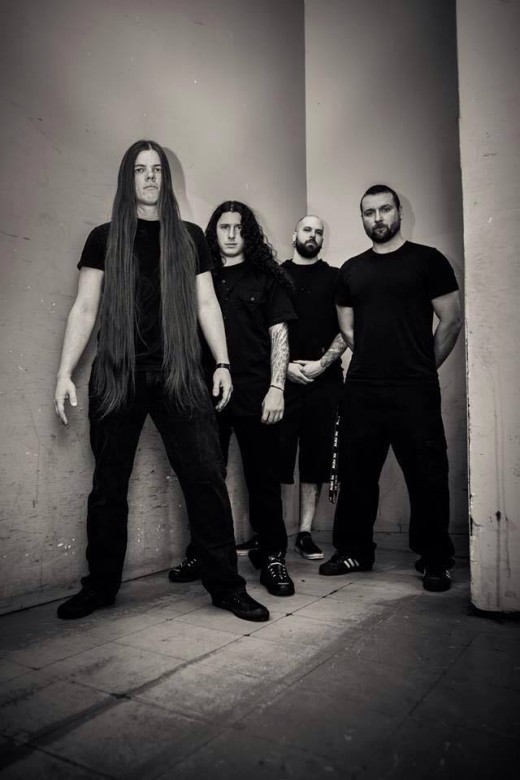 “We strive to create. It is an essential part of who we are as individuals. We will only stop when we are dead!” – Matt

Cryptopsy vocalist Matt McGachy  was awesome and checked in to tell us about the Back To The US 2015 Tour the death metal veteran tyrants are engaging in (Tickets HERE! Get them). Cryptopsy have been curdling blood since before you popped pubes, so give them respect! Also, check their new crowd funding effort and chip in, metalheads!

I’ll tell you what…I just rode 6 hours on a bus today. Mother’s Day I went to babysit my sister’s kids out of state as a favor. It was good to se family but the long ride back to Upstate, NY was ringing my ears. People in early summer in NYC are either amazing to look at, day walker hipster scum or Romero zombie/walkers who stink of piss and mental illness. I mean, it depends on where you are. I love NYC to death, even now. Still, I had forgotten to take my meds for 3 days and swicthed seats so a nice Asian couple could sit together and my last hour home this “large framed” woman in a sleeveless shirt was sweating and fainting on me half asleep, really edging me out. Seeing all this beautiful former countryside roll by as I came back through Rhode Island and Mass and then crawled past NJ adult gift stores and empty lots, it bummed me out. I try to be compassionate and believe in the best in humanity but sometimes you see the swarming, hungry masses just now learning to not have GMOs in their Chipotle and you wanna barf and scream “why, God?! Why are we such slaves to wolfish, murderous impulse.” Then you want to listen to metal and scream and cry.

Fucking Cryptopsy, whichever album (and I do mean ALL of them – seriously, how could you think “The Headsmen” wasn’t fucking insane?!!) have more guts, dedication and tenacity than half the citizens of the United States in guitarist Chris Donaldson ‘s little picking finger alone. These dudes have slaved over countless riffs, logged many miles and held on to the torch of extreme and deadly music long before social media troll-core blog page comment nazis started wearing big ass ear gauges.

Read this exclusive interview with Canada’s dark soldiers BELOW. Special thanks to Paul Ablaze from Blackguard for hooking this up!

Listen to this playthrough vid and STFU!!!

Cryptopsy is awesome and still strong! A band I remember hearing years ago and being blown away, though I never followed you as closely as I should’ve. But one of my most vivid heavy metal memories is of my drummer/guitarist friend Nate Kelley playing (probably) None So Vile for me and it was so intense. I’d heard heavy stuff like Fear Factory and Sepultura but your band was another level of intensity on “Slit Your Guts”. Do you still try and startle people with the intensity or is extreme more common now so it is hard?

Our main goal is to challenge ourselves creatively and technically while remaining true to the Cryptopsy sound. We always try to top our previous release and push boundaries. For myself I always strive to make my vocals more brutal yet clear and understandable.

How does it feel to be doing the Back To The US 2015 tour? How long since your last visit?

I’m really excited to get back into the US. My last visit to the states was in 2008 on The Summer Slaughter Tour, and honestly I was scared shitless. It was my third tour with the band and I TUK had just been released and we were receiving a heap of negative responses through myspace. I was stressed out of my mind and the band was in a bit of a weird state.

Needless to say, we are in a whole new position. Now, I relish every single moment on stage and enjoy myself thoroughly. The US is such an essential market and I feel that we have been neglecting it due to a number of unforeseen circumstances. Well all that is about to change because we are coming to destroy alongside Disgorge, Erimha, Soreption and The Convalescence .

We will also be playing a new song from our upcoming release The Book of Suffering Tome 1. Get your tickets here: http://cryptopsy.ca/buy-your-ticket-for-the-back-to-the-us-2015-tour-now/

What can you tell us about The Book Of Suffering? That was the original title for “The Unspoken King”, yes? It’s a great name for a record.

The Book of Suffering will be a series of EPs. And yes it was the name that Lord Worm was planning to use for his follow-up to OWN. We hold all of our previous members in extreme high esteem and are on great terms with Lord Worm. So when it came time to think of a name for an anthology of EPs the choice was a simple one.

We have launched a crowd fund to support the release of The Book of Suffering Tome 1. You can check out the campaign page here: http://igg.me/at/Cryptopsy

You can also hear an exert from the EP here: https://youtu.be/4QsHUaq8MJQ

Do you feel other technical death metal bands are getting it right or wrong these days or is it their own business what they play?

I have received way too much hate in my seven years in Cryptopsy. So I really don’t hold any of my judgments onto others. I do know that there has been an onslaught of fantastic records as of late such as ones by: Archspire, Gorguts, Ne Obliviscaris, Soreption, Beyond Creation, Black Crown Initiate and Cattle Decapitation. I just consider myself lucky that I get to share the stage with such talented musicians and first-rate people.

How do you view the current state of metal in Canada. I am a big Blackguard fan and some other Canadian bands like Counterparts, USA out of Vietnam, but is it generally a good or bad climate for heavy or weirder bands?

I think that it’s hard for Canadian bands to get out of Canada, honestly. If you live in the states you can hop onto a tour and run. For us to do that we have to get working papers which are rather expensive. But we do have a whole slew of amazing bands from Canada that everyone should check out; The Agonist, Archspire, Beyond Creation, Beneath the Massacre, Despised Icon, Blackguard, The Catalyst, Crimson Shadows, Killitorous, Unhuman, Unleash the Archers and many more. So I always say that it must have something to do with our frigid winters that cause the brutality to emerge.

Oh yeah! Crimson Shadows are cool! Moving on…Do you agree that in the instance of a zombie crisis like in the Book World War Z that humans should go to Canada because the snow will at least stop the zombies in the Winter for awhile?

No way because Canada is already full of zombies…

What keeps the band working hard and inventing new music all these years. Line up changes happen but Cryptopsy lives and is still powerful.

We strive to create. It is an essential part of who we are as individuals. We will only stop when we are dead!

Lineup changes happen in almost all extreme metal bands. It is an extremely physical and challenging genre with minimal financial rewards. So once life throws some hard balls at you its not always easy to make the sacrifices you had made so easily in the past. All I can say is that our current lineup is strong and here to stay.

Is there any feeling quite like playing some of your heaviest parts live? What does it feel like when you are in that space on stage?

When I’m on stage its absolute freedom. It’s a complete release where I get to transform into my second self: the beast. If I were to behave like I do on stage in the real world I’d most certainly have less friends and perhaps even be in jail. It’s my therapy.