Poland’s female-fronted Crystal Viper gained a considerable boost in their already devoted fan base with the release of the acclaimed and soaring “Legends” album in 2010. A thrill-ride of epic, straight ahead yet enthralling riffs that would please any power metal fan, “Legends” found the band perfecting their brand of modern metal with a classic influence. What were they going to do next?

Marilyn Manson, Christian Death, King Diamond (on arguably his finest album “The Eye”) and even Courtney Love have all sung about or used witch persecution as metaphors or in a literal sense. On their latest power slab “Crimen Excepta” (AFM Records), Crystal Viper return to follow up “Legends” with a kick ass concept album full of tales of the Holy Inquisition and battling intolerance, plus more great riffs and lots of cool interludes to move the story along. The rousing, true metal gritty yet melodic vocals of Marta Gabriel are just as powerful as ever. “Fire Be My Gates”!!

It was a pleasure to interview an enthusiastic Marta about the new record.

Heavy metal is full of rewarding times for people who become more than the casual fan. This morning I am in my apartment listening to the re-release of Grand Magus’ “Wolf’s Return” and their song “Kingslayer” march from my speakers. It makes me feel alive and thankful for the freedom and love in my life I have worked and fought for. A few weeks ago I saw Watain play to just 100 kids in a small room in Poughkeepsie, NY, complete with blood, fire and some of their oldest songs. I feel so lucky to have these kinds of times and to be knowledgeable about metal as a culture plus to always be able to discover/learn more. That said, Crystal Viper is a band you should check out if you haven’t yet because “Crimen Excepta” is a great album that will make you certain metal is still alive. I was thrilled when I discovered this band, a group who, like Sister Sin, embody the best in traditional heavy metal with strong female vocals akin to her majesty Doro Pesch. Crystal Viper might even make you want to go out and have some of your own experiences spreading your metal wings and choosing to be an individual.

Also, while it is trite at this point to call women in metal a “new thing”, in 2012 it is always great to see any cultural situation where a woman takes a prominent role or center stage and is supported by a group of cool dudes. Even if it is just heavy metal, that dynamic still makes a good statement. As Frank Rich wrote for New York Magazine recently in his article “Stag-Party”, we currently live in a time when,” …The Republican Party in its’ pathological reaction to Obama has now moved so far to the right that it seems determined to turn back the clock to the supposedly halcyon time when Ralph Kramden was king of his domestic castle.” (April 2, 2012 issue)

Let’s not treat women as second-class citizens and repeat the brutish horror of history. 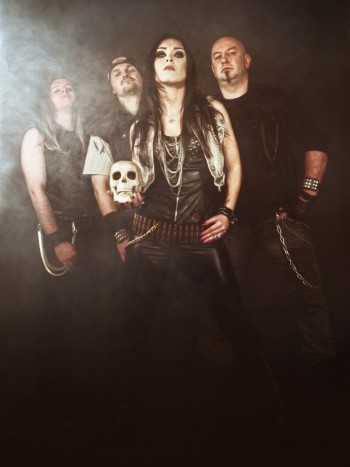 Morgan Y. Evans: “Legends” was very critically acclaimed and such a killer, high-energy record yet full of dynamics. Were you nervous starting the new album, like,” How do we top “Legends” ”?

Marta Gabriel (Vocals): Thank you! It’s always nice to hear such great words. No, there was no pressure. There were no reasons to be nervous and so on. You know, I love composing music, and I get a huge satisfaction from it, so all feelings around it were very positive. We all like “Legends” album, but we didn’t want to record an album that would sound similar. We actually wanted to do something different. It looks like it was a good time for it, because I had in my head a strong lyrical theme, which influenced music pretty much, which is now heavier and darker… And that was a moment for us to be nervous a little bit, because we didn’t know how our fans would react on “Crimen Excepta”. We were all conscious it’s different. But now we know our friends and fans like it, so it makes us extremely happy.

MYE: You have become a stand out band in the genre and obviously truly love the culture surrounding heavy metal. How does it feel to be recognized and loved for doing what you believe as artists?

Marta: It’s an amazing feeling, really. When you are an artist, you compose and record music that you are happy with, and people around like to listen to it, then you feel it really has sense to do it. It’s the same when we play live and see and hear people singing along with us our songs – I’m not sure if they know how much it means for us. Being an artist and doing something creative is great itself, but when people around appreciate it, it gives you more energy to continue. And hell yes, we love heavy metal; we are all heavy metal fans!

MYE: Marta, I can’t say enough how your voice truly soars above the riffs of Crystal Viper to amazing heights! How did you all first meet and react when you first played together and heard how good the music sounded?

Marta: Thank you! It took about 3 years to get together. Crystal Viper started in 2003, and I spent 3 years for looking the right musicians, and right people, who would love this kind of music as much as I do. You know, I worked with many people for these 3 years, but there was something missing all the time. When Andy came for rehearsal for the first time, I saw him as a nice, calm and a little shy guy, but when he started to play I already knew he had this “something” what was missing in Crystal Viper back then. Golem joined us few weeks later, and Tom became our member shortly after release of our first album. And here we are, a group of friends that love music, a bunch of heavy metal maniacs, bound together by a common passion, which is the music and lifestyle known as heavy metal!

MYE: “The Ghost Ship” from “Legends” was so anthemic and always gets stuck in my head. It is still my favorite Crystal Viper tune. My other favorite power metal “trouble at sea” type song is called “The Mad Sailor” by a great band called Wuthering Heights. Would you please go on tour with them so I can come to the show and drink a LOT of beer? Do you know this band?

Marta: I haven’t heard about them before, but I will check them out after this interview. If they drink a lot of beer, and are so crazy as we are, common tour would be a great idea, haha! 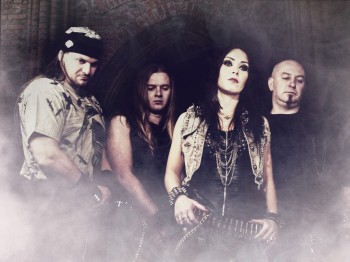 MYE: What were the main themes you wanted to talk about on “Crimen Excepta”? Crystal Viper seems to really spend a lot of time making the lyrics work with each song.

Marta: “Crimen Excepta” seems to be a story about witches and inquisition, but can be interpreted as a story about tolerance and human cruelty. The main topic is of course the Holy Inquisition, but there’ s also something behind the curtain – intolerance. Holy Inquisition exists right now only at the history’s pages, but intolerance is timeless. We meet with it almost every day. There don’t even exist words to say how cruel, and horrible were people in the past. Not only women were persecuted, but also people who had something important to say, scientists, explorers. They also were sentenced to death or prison just because they said something that wasn’t right with the Holy Bible. For example that the Earth is round, and revolves around the Sun, it was a heresy back then. Holy inquisition is a theme for a long, long conversation. I would like people to start to read about it, to know more, because in my opinion it isn’t less important than wars are. Writing lyrics was very emotional for me. I took it very personally because I’m a person who wants to learn, to know more about the world around us, a person who always will have something to say and feels no fear. I can’t imagine living in those times. I can’t imagine to be judged because of expanding my knowledge.

MYE: What is your favorite new song to play from “Crimen Excepta” live and why?

Marta: With no doubt, my favorite song is “Crimen Excepta”. I think it is the best song I ever composed! But I also like “Witch’s Mark”, “The Spell Of Death”… It is hard to choose only one, because all songs are very emotional and powerful, the lyrics have very important meaning and it’s all something totally new and fresh…full of energy!

MYE: What have been some of your favorite live shows in the band and who would you still like to play with that you haven’t yet?

Marta: It’s a hard question, because each live show is very important for us. Every time we give more than hundred percent, and it doesn’t matter in which country we are in, how much people came to see our show, how does the stage look, big or small. Most important are the metal maniacs, who came to see us, to sing and scream along with us. They make each show significant! And there are many great bands we would love to tour with! I would start the list with King Diamond, Nifelheim, Candlemass, Cannibal Corpse, Judas Priest … And of course legends such as Iron Maiden or Black Sabbath! But it would be great to go on tour with any good band. We are always happy when we can play with other bands, and we always try to see the bands that share the stage with us. Being musicians, we are huge Metal fans!

MYE: What is your first memory of heavy metal that made you hooked forever to love metal? One of my early memories was hearing Lemmy and Ozzy sing “Ain’t No Nice Guy” on the radio. It was such a great song! Everyone older seems to say KISS and then bands who grew up in the 80’s always seem to tell me it was W.A.S.P., hahaha.

Marta: One of the first bands that I started my heavy metal journey with was Virgin Steele. It’s fantastic band with amazing songs and very good vocals. When I was young my parents had a lot of vinyl of Queen, Kiss and so on, so it influenced me for sure.

MYE: What was the last really good historical or horror movie you saw? What did you like about it?

Marta: I generally like old horror movies. Lately I was watching with my husband old “Frankenstein” movies, produced by the Hammer Films Company. There’s nothing better than movies that are not only movies, but also a high-level piece of art.