Interview: DEEPER GRAVES – Jeff Wilson on ‘The Colossal Sleep’ and being home 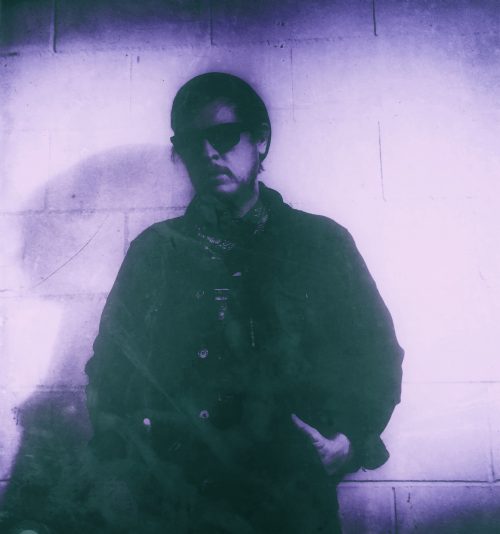 The latest Deeper Graves effort The Colossal Sleep is one of our top selections of the month, a post-punk informed shadow work that really demands attention and at the end of the day rides alone genre-wise. Jeff Wilson (also of Chrome Waves, Contrition and a slew of other past bands of varying degrees of notoriety) has made one of his most piercing and lachrymose, yet decidedly unpretentious records yet. Catch the first video HERE.

It was a good time catching up with my friend and learning more about the current state of his life, label and musical endeavors.

“Feverish Dreams” is a great opener. It sets a tone but also doesn’t rush things, sort of telling the listener you’ll have to have thepatience to let the music not pander to you. But then the rewards are many, if that makes sense. I could also hear “Escape Velocity” as an opening track, but it is cool how you sort of established this big, grandiose feeling then drop into the dancier beat of “Escape…”, dude. Is it hard to choose orders or do you sort of have a story in your head of how the songs go? I could almost imagine you writing the beats for this project first (one of my favorite aspects), then layering elements.

Jeff Wilson: To be honest, the orders seem to kind of choose themselves. I generally know about where things are going to go from the start of a particular song and the track order is something I don’t think a lot of bands focus on enough. Fever was mainly meant to be sort of an intro type piece just like 15000 Lives is your interlude into the second half and I think it serves it’s purpose pretty well on this one.

Usually, when I sit down to track or demo something, it’s just from an idea/s swimming around in my head. I could either just get something down so I don’t forget, or in the case for this album, I think I wrote the music for Escape, Cold Blood, 15000 Lives and Sometimes off the Chrome Waves album to near completion in one sitting. Sometimes, was initially going to be on this album, but I figured James could do something way better with it than I could. I was right.

This project feels a lot like you spreading your wings even more, even as it comes off as sort of hermetic. What prompted you to write this material at this time in your life? I know the pandemic has sort of made a lot of people re-evaluate priorities or work on bucket list ideas. It seems like switching things up has been good for you. I know you have mentioned before how you don’t totally miss touring and being away from loved ones. Time is not an infinite resource and the diminishing return of being far away from home can be a drag, for sure.

It probably sounds terrible, but I totally thank the pandemic for giving me some time off.

I understand. I was working five fucking jobs and was so glad to just be able to like, read a book.

I’d been living in a van half the year for a large percentage of my life. I honestly don’t miss it at all. Not saying I won’t ever do it again, but I don’t see the point in headlining for pennies and the support offers aren’t really coming in. At this point, I have very little interest in leaving my house at all. I’d rather be tracking at home than spending 18-20 hours a day in a van. My life has gotten so much better personally and financially after I gave up the delusion that full time touring was sustainable for me.

As far as what prompted this, I’ve had some of the material off the first album since 2014, I just couldn’t find anyone to put vocals on most of it. I had no intention of ever having a solo project. Even this album wasn’t supposed to be only me, the submissions I got just weren’t up to par, unfortunately. I guess I just don’t like things sitting on a hard drive either, even if only a few people are interested in hearing it.

‘The Colossal Sleep’ is a cool title in that it makes me think of death or also like general disconnect in society. Like, we should have better priorities before we waste all our time doing dumb shit then die, lol. I mean, either way some people think life is meaningless but I don’t think it has to be. Simple kindnesses can reach universal significance that way, if you think about the unlikelihood of living and choice at all. Even atheists and spiritual folks could probably agree on that. Like, adopt a sad dog or help an old lady. That is like, actually metal. I dunno. What does the title mean to you?

That’s a pretty fair assessment all around. I generally do feel a pretty big disconnect for how most people spend their time/live their lives, even with people I once considered friends. It’s definitely a metaphor for dying as well. Between half a dozen bands, my business, my partner and a house full of animals, I barely have the time for shit that isn’t dumb to me and if I did, I probably would’ve offed myself a long time ago. Fortunately for me at least, and probably an irritant to a few others, those things are what’s keeping me around a little longer.

But yeah, it’s definitely about death and dying, even if it’s not, “The Colossal Sleep.” Could just be a stage in your life, a bad habit, an ending friendship. There are much worse things than death in this life; hence the band name too for that matter, there are Deeper Graves.

It was cool to hear Heath’s contributions. Good to see you are still homies. Did you write all the lyrics and have him sing the songs he was on or did he come up with his ideas? I assume having spent lots of time together before you were aware of one another’s non-metal influences.

Yeah, I was aware and he wrote some of the lyrics for Wolvhammer too, so knew that he could pull it off well. Heath pretty much came onboard to the album at the last minute after the departure of another vocalist and he wrote his parts on both songs as I was pretty burnt out by that point. After months of waiting and thinking this wasn’t going to get finished, I was glad I reached out to him and I think everything came together better than I had anticipated.

That’s awesome. Do you think you will mainly do these sort of concentrated, all killer EPs for this project? It isn’t a bad model. How long did it take to accumulate this newest batch of material?

I mean, I think both have been long enough to be a full length. Wasn’t Reign in Blood like 28 minutes long? There are going to be several shorter releases in 2022, along with some covers, etc. I’d rather do EPs, but it just hasn’t seemed to work well with PR and the sales are a fraction of a full length in my case. Unfortunately, the album prior is always the one funding the next, I’m not making any money around here.

I started working on this one probably the week after the last one came out and I think the music was finished around April of 2021. It was originally going to be released in 2021 and then I had to remix/add new vocals, etc. after Heath contributed. The plan from now on is to always be starting the next album for the following year as soon as the one prior is released. That goes for DG and CW. I’ve got no intention of slowing down.

What else is going on for you coming up in 2022 and also for Disorder?

Currently finishing up preproduction for the new Chrome Waves album which should be out in probably June or July. Otherwise, several smaller releases for Deeper Graves are planned and just a lot of new music for the label. In various stages of completion for new stuff from Bones, Cradle of Judah, Above and Below, Plaguewielder, etc…Talks of doing new projects, but have to keep priorities in order. Also, hoping to get the studio up and running for outside artists by 2023 and as always, printing a million t-shirts…

Thanks for the time! Hope all is well in the new year.

More On: xx No Genre xx, Exclusive, ,
share on: