Iowa’s own hard rock workaholics Destrophy have been having a great summer on the Atavist Tour supporting Otep (and serving as her personal backing band for the tour)! Alongside Sister Sin and Blackguard as well, the tour has proven to be one of the funnest mosh-worthy concert packages of the year. Destrophy nailed the Metallica meets alt-metal vibe on “Reconnect” in the past and can work unsuspecting crowds to a frenzy.

On their recent CRY HAVOC release (Victory Records), Destrophy have really developed their hooks to new heights as well. ‘The Way Of Your World” was a previous fan favorite but the new “Closer” is so catchy it’s like if Bon Jovi’s “Runaway” somehow morphed into punchy, modern rock with balls, while the title track to the record is just plain unstoppable (maybe the best straight up/good old fashioned hard rock song of the year).

Destrophy have had darker moments but always aim to inspire. This band wants to be your soundtrack and never take the fans for granted. CRY HAVOC is the band’s most motivating material yet, strong songwriting and layered harmonies atop thick, melodic hard rock riffs that get the blood flowing. Destrophy are just as at home playing with Avenged Sevenfold or Stone Sour as they are sharing a stage with Disturbed, Otep or the late Type O Negative.

Click HERE to read an interview with Ari from Destrophy about touring, CRY HAVOC and the merits of humility.

Morgan Y. Evans: How did it feel to release CRY HAVOC? The growth of the band is awesome and it is great to see you come play my area (Poughkeepsie, NY).

Ari Mihalopoulos: Thanks. I appreciate that. It’s a really cool bill. When the record was being made we had the idea of making an uplifting and positive record, not dark and heavy. So honestly, the last band we thought we’d be touring with would be an Otep tour. The last one, God, we were on…it was Through The Eyes Of The Dead and Bury Your Dead. We called ourselves Deathstrophy just to try and fit in (laughing). We played the heaviest stuff we had, which isn’t super heavy stuff. This tour is set up great. You have One Eyed Doll, who are from Mars, where they come from…musically. Then you have Sister Sin who have this 80’s vibe over into a little more metal with us and then the metal with gauntlets when Blackguard comes on. Then you’ve got Otep!

MYE: All the bands are uplifting in some way. She’s really outspoken and Blackguard are very fun to party with.

Ari: True! All the bands are really positive. I don’t even know how to explain quite the vibe. Actually, to me this is a good, fun, smiling tour. To me that’s personally preferable to a dark tour where everyone hates each other.

MYE: Liv from Sister Sin told me this was one of the funnest tours they’d ever been on.

Ari: That feels good to hear. For my band, I don’t want anybody to have anything other than a positive experience and a safe and good experience.

MYE: Destrophy is really road tested and I love the confidence and determination of your band. It made me a fan and I also love the variety of bands you play with.

MYE: I admire you are open-minded where some bands aren’t and you also are matter of fact about what Destrophy does. It’s not pandering. “This is who we are. You don’t have to like it.” Plus, you’ve done some awesome things but there’s also humility.

Ari: Humility is very important. I don’t care what you’ve done. One of the most evolved traits of a human being is humility. You don’t really find it in animals. You find cowardice or alpha male. In human beings, humility is essential to moving on as a species and improving society. I believe in modeling ourselves that way. I believe in our ability to influence people and take that very seriously. I used to teach.

MYE: No shit? Really? That’s very cool. I didn’t know that. (Note=Also, it is startling Ari wasn’t a gym teacher since the guy was throwing kettle bells around like feathers pre-interview). Could you talk a bit more about that?

Ari: Sure. I was a substitute art teacher for about five years so I really feel a great responsibility to set an example. Not to preach, but to set an example for what I think is right. Not to take advantage of people and to try and help people. Try and protect them if you can. Hopefully try and encourage that in others. 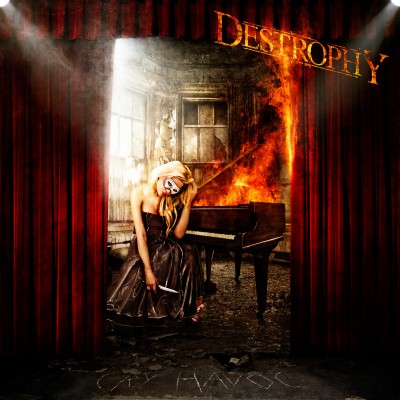 MYE:  Could you talk about producing CRY HAVOC yourself and about working with Corey Lowery and his brother Clint Lowery from Sevendust on a song?

Ari: There was a song called “Still Bleeding” we wrote in 2008 which was going to be on the previous album, the self-titled. It wasn’t completed to my satisfaction and we were trying to figure out how to include it on the earlier album. We’d played it live and it had gotten a good response. It has a little of that “lover’s lament” vibe. There’s a lot of love on the album but I wanted to twist it to something a little more evolved and more positive than “You broke up with me.” Less reactionary. That’s a very valid thing and everybody goes through it, but I wanted something newer. So they helped me in terms of setting the song and arrangement and some of the words up. Clint played the solo. We’ll hopefully play it somewhere on this tour. We’re playing two radio songs in a pretty brutal tour package and fans are still being really cool about it. They are very open and singing along.

MYE: A lot of Otep’s fans are open-minded.

Ari: Sure. That’s a great way to put it. They aren’t like, “What’s going on”. I remember playing with Type O Negative. Honestly, that was probably a better fit for what we do, but man…we walked out on stage and people would look at us like, “Who the hell are these guys.” Arms crossed! But we won them over. My favorite experience was Clifton Park and Pete was watching us from the side of the stage. It was a brutal audience but by the end we’d won them over and they were chanting. Pete was checking us out when I looked over and it felt great. I felt like we represented.