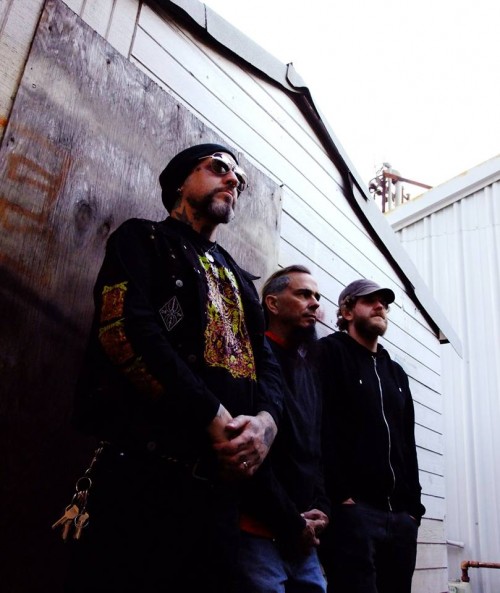 I interviewed Joe Truck Kasher of Dowager years ago for the sadly defunct Crusher Magazine, back when Joe was playing in a bad ass rock band called Confederacy of Horsepower. I hadn’t talked to Joe in a few years and stopped by his Facebook to see what he’d been up to. I was blown away by his new doom band Dowager, totally my kind of evil!  So far as far as I know only the Sludgelord website has smartly started loving on Dowager as much as I am, but that will surely change when more fans and critics hear of them.

Remember hearing a band for the first time and having your attention grabbed. Be it Dillinger Escape Plan or Samhain or Mercyful Fate, something about it was different and almost shocking. Dowager have pulled that off on their demo. Sure, the band is mining territory we have heard before, but they are so damn good at it they will stop you in your tracks.

How did Dowager form and what was your mission?

Dowager began as a one man thing with me-Joe-playing all the instruments..it was very speed metal oriented, sort of VENOM meets DISCHARGE. Then as i searched for musicians..i started slowing down my writing style. Then when the line up was complete we all started writing in the same sludgy style. I had played with JK-(drummer) in another band and I met HANNES-(guitars) thru an ad i placed..a match made in hell.

I like the kind of melodic vocals on “From the jaws of Cerebus”. There is gruff stuff but still a hint of melody. kind of what i like about the band Conan. you guys have some monster riffs and cross between stoner, doom and darker stuff. have you always been into this kind of stuff in addition to your mpre “rock n roll” bands like Confederacy of Horsepower or whichever?

I have always been into a million styles of music, I think all of us in the band are… but punk and metal were always at the forefront. I love melodic music too as well as the most dissonant of noise. I write my vocals geared towards the vibe of each song, sometimes more accessible, sometimes not, but everything I listen to influences me…LOVE CONAN by the way.

Who did the artwork for the demo? It is bad ass.

His name is OIK WASFUK–NOTHING SACRED ARTWORK…HE IS BAD ASS!!! 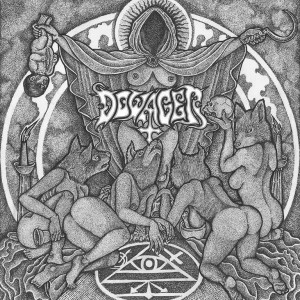 How do you feel the L.A. scene is for music these days of the darker variety?

“Slave Ship” is a pretty intense song. I was actually on the Amistad once and it was pretty crazy to tour it and see the real quarters where slaves were carried here. What inspired you to write this song?

Hannes wrote that epic riff, and to me it brought up images of a huge ship full of lost souls…so I thought of how horrible it must have been to be locked in the bowels of a slave ship…in rough waters..and the lyrics just flowed.

How do you feel about the popular boom of tattoo culture via television shows showcasing certain shops?

LAME…I have been tattooing for 25 years. I have no time for tattooing as reality based entertainment. 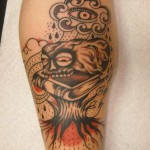 “Lycanthropic Jihad” is awesome. I am way more into werewolves than vampires, generally. Love the ugly ass opening bass tone after the sample in the jump. Any favorite werewolf flicks?

I-Joe-(bass/ vocals) wrote that one before i even had the band together. I’m very stoked on my bass tone. It’s UGLY as fuck…distorted and hateful. I love horror of all kinds but I agree…werewolves are cooler than vampires. THE HOWLING, WEREWOLF OF LONDON, THE WEREWOLF(HAMMER), DOG SOLDIERS,AMERICAN WEREWOLF IN LONDON.

I forgot about DOG SOLDIERS. OMG. Also, Operation: Metal Beast (although it doesn’t totally count). Are you working on a full length debut?

Yes!! We just got signed to DOMESTIC GENOCIDE RECORDS!! We have a full length scheduled for a fall/winter release with them and we are so excited!! Before that we are going to release our DEMO with one extra track on limited edition colored vinyl!! look out for that on our bandcamp!

What inspires you to keep creating rock n roll music at this point in your life?

I tried stopping. I can’t. It’s my life and my soul. And besides my wife and kids, it’s the most important thing in my world.