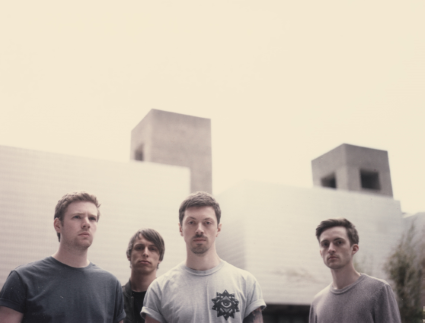 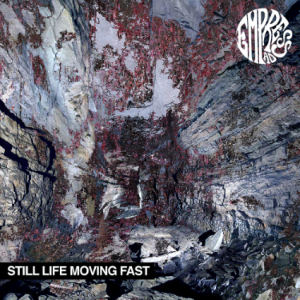 The band worked with Andrew Schneider (Cave In, Pelican, Old Man Gloom) to craft their debut, sure to win at least several Gold medals.

Good morning. How are you today and how does it feel to have the release date of this record drawing near?
Morning! I’m all good cheers. It feels awesome to finally have the release date so close now, we’ve been sitting on the album for over a year and a half now so we’re all really excited to get it out there and for people to finally hear it.
Have you gotten to tour the United states at all yet? We’d love to have you here.
No we haven’t yet, we’d love to come to you guys soon!
There are definitely plans in the works and we hope we’ll be in the US by the end of this year or very early next year. We’re discussing some opportunities at the moment but nothing has been confirmed just yet… stay tuned though!

Love the cover art for Still Life Moving Fast. Kind of has this jazzy sense of existential pining. What can you share with us about the image?
We love Seth Curcio’s work, he’s true genius. He actually did the artwork for our previous singles but I think he’s really excelled with the album cover art. We purposely didn’t give him an idea of what we wanted for the cover art because we wanted him to listen to the album and interpret the sound and feel of it in his own way.
But you’re spot on with the ‘existential pining’ description, the lyrical content of the album is very existential. The vastness of the cave with the speck-like silhouettes lost in the middle of it is a perfect metaphor for the overall meaning of the album.
“Delve Into the Retrospect” is my favorite. Such tension and release. Beginning reminds me of “The Bends” from Radiohead if it was a Crack The skye-era Mastodon song played by Failure. The slow drum beat and melodies, great bass tone…how much care and time went into this release? So much involved stuff on the record! Also, do you think we only often in retrospect realize the special things we lost?
They were definitely some of the bands we were listening to when we writing the album. Delve is probably one of my favourites too though, I love playing the songs that have the huge dynamic changes. We spent a lot of time getting the dynamics perfect for Delve, probably more so than the other songs in the album. The hardest part was jumping to and from the extremes of the heavy and light sections. Sometimes you’d get so into the vibe of the big, heavy sections you’d forget that you’re playing as soft as you can for the next section, and vice versa. When you nail it though there’s nothing better.
I think so a lot of the time, yeah. It’s hard to think rationally when you’re being pissed off or stubborn about something. Hindsight is a (not so) wonderful thing. 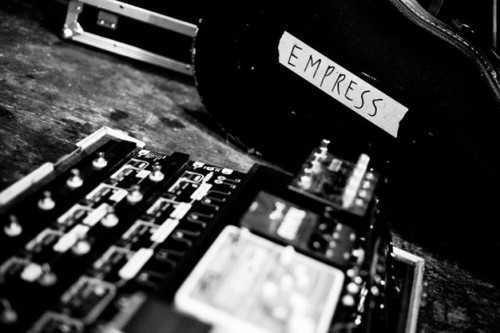 Any popular Empresses from history who you admire for their pluck, beauty or foresight?
My history isn’t that great!
Side note…How do you guys feel about the news of a new Pink Floyd album? Any other UK bands you are keen on right now? I was sad when Humanfly broke up, but glad I have a new progressive art rock/metal band to love…you guys!
Honestly, I’m not really that excited. It’ll be good to hear unreleased material but they aren’t the same band they were whilst in their prime. For me, there isn’t that hunger to prove something or want to change something that they had in their earlier albums. I’ll still give it a listen though.
I haven’t actually been looking out for any new bands recently but we’re good friends with two awesome bands, Shrine and Bovine, who are both doing their own thing. Well worth checking out.
Oh thank you man, glad you’re liking our stuff!
Why do so many bands fear the power of melody? If done right it is undeniably powerful. Are bands too obsessed with genre?
For sure. I’ve always loved bands that have melody. I can’t handle constant screaming all the time, it doesn’t excite me and it’s been done a million times. I see screaming more as a part of your voice that can take the song to an extra level, it’s a dynamic tool. Yeah I think way too many bands are genre obsessed, especially heavier bands.
How do you feel London or the UK is in general these days as far as political or social tension? Does this affect your art?
I think there is a sense of disillusion and not really a sense of purpose. Western society has such a massive consumer based culture that’s run by huge corporations who only care about profit, not the environment, animal welfare or the future of the planet, just making money and controlling the population. It’s also hard to feel optimistic when politicians are also just so out of touch with normal people.
People are slowly starting to take note though and be like, actually this is shit, let’s do something about this. Social media does piss me off with how celebrity obsessed it is with people like Kim Kardashian, who even is she, what good has she done!? But it can be a great thing, it’s raised so much awareness on loads of issues.
This is the kind of stuff we write about. I think it’s more important to talk about universal issues/feelings and how you feel as a human being rather than singing about how much money you spend in a club.
[youtube]http://youtu.be/QgDBm-tVrWM[/youtube]
Empress AD’s new  ‘Invisible Conductor’ – also had a Loudwire hosted Exclusive Video Premiere | http://loudwire.com/empress-ad-invisible-conductor-exclusive-video-premiere/?trackback=tsmclip