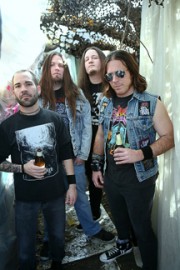 Bloody death grind masters Exhumed have never been subtle, and the band’s first record in years “All Guts, No Glory” is a true declaration of gore! “All Guts…” is highly anticipated and is sure to quench the crimson thirst of ravenous zombie riff maniacs the world over!

I talked with Matt Harvey about making the record and much more. Click here to read it.

Morgan Y. Evans: How does it feel to be back with “All Guts…” and this band line-up? How has it felt to come back after an extended amount of time? Your band can still shake/carve things up!

Matt Harvey: It feels great to be back, I think the line-up is awesome, and the record is our best yet.  It’s been a little weird (usually in a good way) to be back after such a long break.  I am constantly surprised at how many people remember the band. It may sound corny, but I really feel grateful about it, to be honest.  I don’t know how we would have been able to get everything together without this lineup – we all work independently and also have great chemistry together musically, and more importantly as people. We always have a good time jamming and working on stuff, which for me is the key ingredient. I know we’re happy with the record, and feel confident in being able to go out and kick ass at all the shows and shit we have coming up, and I think that the necromaniacs out there will be stoked to hear the album.

MYE: What did you know you wanted to accomplish with “All Guts” since it is your first album in years?

MH: It’s kind of like our first album all over again. I think we needed to kind of state what the band is all about again.  Just like “Gore Metal” pretty much served to introduce the band to people in ’98, I think this record does it in 2011 – obviously there’s been some growth and shit since then, but it’s still just all-out, aggressive Thrashy Death Metal and Grindcore. For me, I hadn’t really written or played this style of music (aside from Repulsion shows) in quite a few years, so it was kind of me finding my feet again – getting used to the sliding power-chord kind of riffs that we have, and having fun re-exploring a lot of the progressions and tonal patterns that kind of make up the Exhumed “sound”.  I kinda forgot how much fun this shit is to play and write somewhere along the way – so I was kind of like a 16 year-old figuring all this shit out again while writing the record.  I didn’t really have a concept or whatever going into it, it was really natural – but as the songs came together, it became clear that we were sort of making a sonic manifesto or mission statement as to what Exhumed is all about.  I really do think it’s our best album yet – we’re really happy with both the production and performances, which has been rare though the years, so now all that remains to be seen is what the kids think.

MYE: You guys have announced dates with Atheist and also are playing places like Norway and France and Mexico City coming up. How does it feel to be able to travel so much and all the while play such uncompromising music?

MH: It’s great.  I’ve barely traveled in the last 6 or so years – compared to how I used to anyway (except for the Gravehill US tour I did last year).  I love traveling, seeing old friends, making new ones, trying new beers, so it’s great.  We’ll be playing Norway and Greece for the first time in a couple of weeks here, and getting back to our old stomping grounds – Belgium, Holland, Germany, and the UK.  I can’t wait!  After Mexico City and Maryland Deathfest, we’re headed out for 3 weeks all over the western US and Canada with Macabre, Cephalic Carnage, and Withered, and then we have more festivals on tap for Europe in August.

MYE: You recorded “All Guts…” at Arcane Digital Recordings in Arizona with engineer Ryan Butler (MISERY INDEX) and at Trench Studios with John Haddad (ABYSMAL DAWN, INTRONAUT). I am a big fan of Landmine Marathon and remember Ryan posting stuff online about the sessions being pretty fun and crazy. What was it like working between the two studios? Any crazed adventures you can tell us about?

MH: We tracked the drums in Orange County California with John at Trench Studios.  He and Danny have worked together extensively, so it was really relaxed and easy to get good tones.  Plus, he has a hot tub.  Some of the Gravehill crew came over and had drinks with us, but Danny had 17 songs to track in 2 days, so we weren’t able to get too out of control.  Same scenario in Phoenix really – we had 17 songs to track rhythm guitars (quadruple-tracked), vocals (2 vocalists), bass, solos and anything else we needed to do, so we just hung out at Ryan’s house.  We went out to the bars on Halloween, but we had been working such long hours I just fell asleep at the bar.  So we need to make up for the recording with some serious mayhem on the road!

MYE: You guys are also touring coming up this year with Withered and Macabre plus Cephalic Carnage, what is sure to be a sickening line-up. In the current realm of metal, it’s good to see strong package tours like this keeping it good for the fans and reminding people that metal is not just gimmicks. Anything to say about any of your tourmates on this bill?

MH: Cephalic are friends of ours from waaaaaaaaaay back.  We both came up in the late 90s, and had played together quite a few times before either of us were even on Relapse.  We’ve toured the US and Europe with them, and they’re amazing musicians and amazing people.  I am so fucking psyched to have them out there with us – it’s just gonna be hanging out with old friends interrupted with brief bursts of having to play, hahah!  I don’t know the guys in Macabre, but I remember how into the “Sinister Slaughter” record we all were back in the 90s.  That and “Gloom” were totally influences for Exhumed, so it’s really exciting to be out on the road with a band that we enjoy and respect as much as Macabre.  It’s gonna be awesome!  Withered, I don’t know too much about, but the record of theirs that I heard was really cool and stylistically a bit different than any of the other bands on the bill, which I think is really important.

MYE: “All Guts, No Glory” is one of the best gore metal album names I have ever heard, for many reasons. I mean, it also sort of gives a nod to your Samhain cover and is a play on words plus sort of sums up how grind and gore or death metal bands really do music out of passion before profit (not that you aren’t successful, but you know what I mean). How’d you settle on the title? I’ve always liked your song and album names, ever since the hard to top “This Axe Was Made To Grind”.

MH: I was driving home by myself, thinking about all the shit that we were undertaking with the record and shows and everything. I was feeling a little overwhelmed, but stoked at the same time, and I thought, “no guts, no glory, right?” Then I kind of chuckled and because my immediate response (yeah, I talk to myself, especially in the car) was that we’re usually more like “all guts, no glory”.  Then something kinda clicked, and I really felt like I was onto something.  I immediately texted the other guys and was like: “Here’s the album title: done!”  It’s kind of a one sentence band bio or something, haha!

MYE: What do you think about the over-usage of the terms “grind-core” and “death metal”  these days, often to describe bands that don’t seem to fit the traditional values or know about older bands from those genres? I mean, we all know different things to various degrees, but if I was playing a genre I would at least research it a little!

MH: You know, I don’t really think about this kind of thing anymore – I used to for sure.  Now I just kinda worry about my own shit and I find that the less I know about what’s going on in the scene, the better.  I know what Death Metal and Grind sound like to me, but I’ve been listening to this shit since 1989, so of course my perspective is gonna be different from a kid who just heard their first Job For A Cowboy album.  All I can do is play my shit the way I want to hear it, and let the chips fall where they may.  I have my own ideas about the roots of this kind of music, and I have a real passion for it and I love researching it and discovering the old stuff, but everyone kind of gets into it in their own way.  Anyone that’s gonna be involved in the scene for any number of years will figure it out eventually, they don’t need anyone shouting them down – that’s only gonna turn them away from the underground.  At the same time, if people wanna talk to me about Larm and Siege and Deep Wound and Insanity and Death Strike and Cryptic Slaughter and shit, I will gladly talk peoples’ ear off about it!

MYE: What’s the story behind “Dis-Assembly Line”? I head that name and got this horrific image in my head.

MH: Actually there is kind of a weird story with this title.  The title for this song was actually given to me years ago by a kid on Myspace whose email I have since lost – sorry dude!  Ironically, he wrote me for advice on writing gory lyrics, and sent a list of song titles he had come up with.  “Dis-Assembly Line” was one of the ones vetoed by his band-mates, and I told him I really liked it.  He told me to use it, so here we are years later.  I would’ve loved to properly credit the guy… The title was all I had to go on, but it was more than enough – I think it really hits on a lot of things, I love how kind of de-humanizing it is within the context of the Exhumed lyrical approach.  That’s a core motif we’re always working with and I really couldn’t think of a better title to convey that.

MYE: How has Relapse been regarding the return of the band? It seems like they are very psyched (as are the fans) about this release.

MH: They’ve been hugely supportive, which is really nothing new – but it’s been cool to see how the label has grown and improved since the last record.  I’ve been nothing but impressed.  Gordon Conrad (VP of operations at Relapse) is one of my all time favorite people and certainly one of the most important people in the story of the band so far.  I would feel weird working with any other label at this point, so we’re very happy.  I get the impression that they’re very psyched – even more so than usual, and that’s encouraging.  I think we’ve given them a good record to try and make some impact with, so I’m sure we’ll find some other way to screw it up here in the near future.

Thanks for the interview and the support!  Cheers and see all you fuckers on the road SOON!  Save your strength and beer money for the day we come to your city! 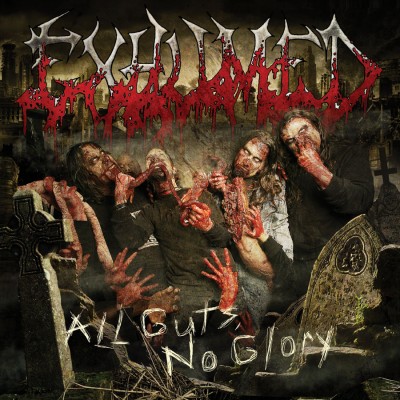