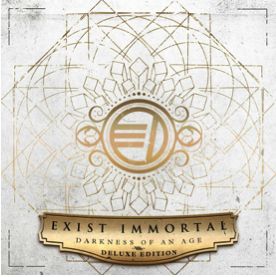 London is a city with one of the deepest histories, so many stories to its name. How do you feel it is a part of you?

It is where we all grew up, so all our experiences and developments as people have occurred either in London or with London being our home.

The metalcore scene is cluttered with bands though thankfully there are still grand statements being made like You Can’t Stop Me from Suicide Silence or “The Saw Is The Law” track from Whitechapel, for example.You guys bring some great other elements into it, like the technical kind of marching bridge of “Legions” and not being afraid of melody. In Flames straddled genres so well this year on Siren Charms, and in a kind of similar way (though more metalcore), your band seems to approach each song as something to let grow a life of its own under the larger umbrella of your basic core sound. Am I on track?

It is definitely true to say that the metalcore genre is a busy one, with similar bands appearing left right and centre, however with quantity does come a higher chance of quality, despite perhaps being left with a lot of fodder to wade through. Indeed you are right on track! We are quite keen to ensure that each song has its own individuality and story, but as we all have a strong sense of what we are about, musically, as a band, each song falls within the basic idea and vibe naturally without much deliberation or conscious intention. For us, our aim is never to write a song specifically to fit within a certain genre, but instead to make sure each song itself tells it’s own story. 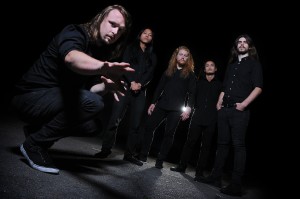 “In Parallax” has a very cool, spiraling guitar part and shifting rhythms. You guys and your neighbors in the band Polar are some bands who are kicking ass on having “deeper” or more layered textures. It’s something I loved Stateside in bands like Crime In Stereo or Titus Andronicus. Or in heavier bands like Torrential Downpour. Is it fun in the studio playing with sounds?

It definitely is! We write and record in my studio in NW London, which gives us the opportunity to spend time experimenting with ideas and sounds that go beyond the 2 guitars, bass and drums basics. As much as simplicity is often hugely important and, at times, necessary, implementing less obvious textures and layers in simple but effective ways can make a big difference when developing an overall vibe of a song.

“Insanity Project” one and two book-end the album. What gave you the idea to arrange things this way? It makes it kind of a looping story, in a way.

Insanity Project lives up to it’s title, to be honest! Part 1 was the final track we wrote for the album after a couple of months of hard work and cabin fever, so it occurred as a balls-to-the-wall heavy introduction into the album. With this song, we wanted to avoid a typical verse, chorus, verse, chorus structure, so as to perhaps throw the listener off slightly and focus the attention on the heavy simplicity of some of the riffs. Part 2 came about by experimenting with expressing the intensity of the song in other ways. If you will, part 1 is an angry, extroverted expression of frustration, whereas the intensity of part 2 comes from the simplicity of the melodies on top of subtle ambient layers, expressing the same emotions as part 1 while allowing a more introspective approach to the underlying meaning of the song.

What are some of your favorite places to play? It must be fun to drop the slower or crazier parts of “Edge Of Infinity” on a crowd, a huge rush.

Our hometown, London, is always great. However, France and Belgium tend to kick off pretty hard! In the UK the smaller towns and cities such as Aberdeen and Norwich are always amazing, especially when people go hard to those bits in Edge!

Do you ever feel blessed but haunted in life by a random sentence someone said, maybe years ago. Certain things stick in the memory. I remember a beautiful girl who said ,”I hate exclamation marks overly used in punctuation.” Or like Peter Parker has Uncle Ben to remind that with great power comes great responsibility, as they say. Any mantra or advice that someone gave that you took to heart?

My Grandad, before he passed, once said ‘do not disappoint yourself at your full potential’, which stuck in my mind! I have no idea whether he believed in a multiple universe theory, but the idea of a version of myself as the best I could ever be having the ability to judge me is something of an impetus to get things done!

Interesting, like at some point we get it right.Your song “Imperator” is so sool. The start of it almost reminds me of a deathcore version of October File or Killing Joke before the song gets way more prog. IS it fucking impossible to get the band sounding good live? You must bring your own sound person out, no?

We always tour with our own sound engineer, who is someone we have rehearsed with prior to the tour and who knows our set and what we are about inside out. It can be difficult, but our backing tracks are carefully leveled to make sure everything is clear and has the intended effect live!

How did “Liberator” with Sam Rudderforth of The Colour Line come about? I feel like that song needs a video on a rooftop to let the riffs reach a whole city.

This is another song, like Insanity Project part 1, that flowed off it’s own intensity while being written. Sam is a good friend of ours who plays in a band called The Colour Line, with whom we have toured and shared the stage countless times. His voice is unique and different to mine, expressing a totally different set of emotion that are particularly effective in the part of the song he vocalises. We had considered doing such a video for it, but we had to reconsider when the typically miserable English climate makes things a bit more complicated!

“Do people still cry wolf too much or is this really a time to be concerned for the World” seems to the question more “average people” wrestle with when they start to become more aware. I think the underlying energy field of the Earth will protect itself, or is it vanity to think our World has an important cosmic purpose just because we happen to inhabit it? But also… that we play an integral part. Humans should not easily harm the planet. To do so is an insult to good science. Do you think that is a real “Omen Machine”, the ability to perceive that we might be in trouble? Stray From The Path had a record “Make your own History” and that seems to be a great rallying cry to me as a phrase.

I think a common misconception some people make is that we are endangering the Earth, when in fact it is our place on the planet that is in jeopardy from our ignorance and unwillingness to act. The Earth will continue to exist long after humans (as we know them) are extinct, as it did under much harsher conditions millions of years before even any living organisms existed. Therefore, I think vanity is perhaps the most important reason to act at all. If for anything at all, we must change our behaviour on this planet simply for our own survival as a species (which, in itself, is a valid ‘cosmic purpose’ if you will), as that, realistically, is the only thing in jeopardy. With this in mind, ‘The Omen Machine’ in this instance would indeed be the human race, knowing full well the direction we are heading in, yet for some reason so unwilling to act. The song itself talks about exactly this, standing on top of a mountain looking right towards the end, yet struggling to come to realistic terms with the future we are facing.