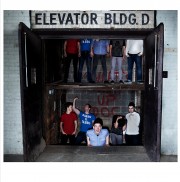 If you have seen For Sleeping Or Jumping’s kinetic video for “Beardrops” from their debut EP “Dead Languages”, you know this is one of the rowdiest groups of up-and-comers to hit the hard rock scene in some time. Produced by Ben Weinman (Dillinger Escape Plan), the boys in FSoJ share the push/pull between crushing, spastic intensity and songwriting brilliance that makes Dillinger so appealing with every release.

“Dead Languages” is anarchic energy, manic thoughts and eyes rolling back in the head. It’s cold sweat and blood pounding in the temples. It’s attitude, anger and also somehow a rock n’ rolling good time. Above all, it is sick performances captured with killer production that feels raw yet refined, almost perfect out the gate!

FSoJ has the technical ability mixed with the self-awareness and cool on stage/personal attitudes that will appeal to fans of Botch, Animals As Leaders or any forward thinking band steeped in hardcore/avant-metal. These guys have made one of the funnest, wildest releases of 2012.

To read an interview with vocalist Giovanni Coviello click HERE. 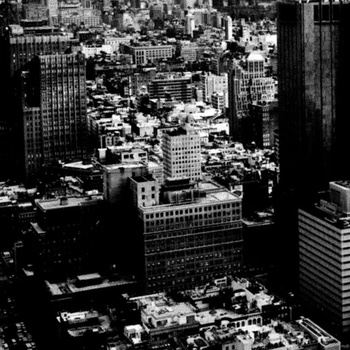 Morgan Y. Evans How are you doing today? How does it feel to have the EP out for public consumption?

Giovanni Coviello (Vocals): Today, I’m alright. I’m selling trolley tour tickets on the waterfront of Boston, slightly hung-over with eggs and cheese in my belly. I guess having this new EP out is sorta like cooking something unconventional for your whole family on Christmas Eve. If not everyone enjoys it, you hope that they at least all try a bite and thank you for hosting.

MYE: I can never eat eggs when hung-over. You are strong. So, “Dead Languages” is an interesting name for the record. In terms of music it makes me think of underground history being lost or perhaps whole genres or bodies of work falling into obscurity. Check out “To What Strange Place: The Music of the Ottoman-American Diaspora, 1916-1929”. It’s a cool documentary. The album name also made me think of the story behind your band name, incidentally. The band name comes from hotels in the Great Depression asking guests if they planned to sleep or jump, correct? Nowadays we are in another trying economic time and language seems to be failing people left AND right. How can we communicate and get through this time as a society? Also, how do you feel your music reflects the years you are living in as a human being experiencing “life”?

GC: The art of communication and the beauty of language has sort of dwindled since the invention of smart phones and the over indulgence in social media. People, especially kids my age, seem uncomfortable speaking to one another face-to-face, and I guess Dead Languages is sort of a reference to that. Mostly, though, we just thought it sounded badass. The music reflects the fact that we’re five dudes just having an awesome time and playing music because we love music and love being in a sweet band. And that’s pretty much our life, as of now.

MYE: How did you guys meet Ben from Dillinger and get involved working with him? How was it working with Ben and Ryan Siegel on the release? The record has a lot of textures and it seems anarchic but also professionally executed, kind of in a similar spirit to Dillinger, in fact. The drum sounds are fucking retarded (that means good)!

GC: After a few years of street teaming for Dillinger, we made a conscious effort to become tighter as a band. Tight enough for us to be able to confront Ben [Weinman] about working together without him laughing at us or ignoring us altogether. Luckily, he didn’t ignore us, and a few months later we were in his sweltering basement in New Jersey while he helped us lay the groundwork for the EP. We met Ryan [Siegel] through our friend Dan Ellis and he was a perfect fit for us as well. Ben and Ryan both made us feel incredibly comfortable with the recording process. Awesome dudes. 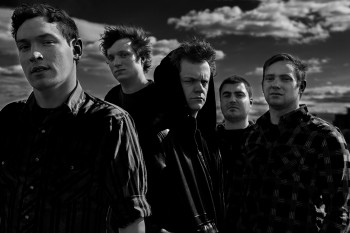 MYE: What was the idea going into making the video for “Beardrops”? How was the experience? Did you just want to do a raw live video to introduce the band instead of a concept piece for any particular reason? I love how the busy sections of the song don’t detract from the overall “song”. It all gels in a coherent emotional way.

GC: We liked the idea of doing a video of us playing live because a lot of times when bands try to force concepts and extraneous shots it doesn’t translate so well and often times comes off as cheesy. We stripped it down because, in the end, we are a band playing music for you. Don’t you wanna see that? But there’s some sweet camera angles and shit in there to keep it interesting.

MYE: Your band reminds me a bit of Every Time I Die, Drowningman, Helmet, Cave In, Botch…but still definitely doing your own thing. Did you consciously draw on certain influences while writing for this project or did it all evolve from jams or song to song until you had an “identity”? You guys should tour with the bands Former Thieves and Golden Torso (with the awesome ex-Kylesa drummer Jeff Porter). That’d be killer.

GC: For the overall production, we had a few reference points; we love the heaviness and grit on classic records like “We Are The Romans” and “Jane Doe” respectively. We try to sound as much like ourselves as we can, but drawing comparisons can be a convenient way for people to get comfortable with new music. People tell me sometimes that I remind them of Mike Patton, but I’m not actively trying to sound like him at all. I’ve literally just been listening to Faith No More since the year I was born. It’s in my blood. I can’t help it. I know Tom the guitarist is a closet Slipknot fan, so that’s probably in the mix somewhere as well. Our band’s sound is an unintentional tribute to what we love about music. Isn’t that true of any band?

MYE: What was a breakthrough musical moment for you that opened your eyes to the wider world of music? It could be a performance or a video or a life experience or show that opened your mind? To me I remember just bugging out when I heard the raw intensity of The Misfits, for example. So yeah, any memories to share on why you write the way you do as a person?

GC: Speaking for myself, a moment like that came for me when I was about 12, watching Mtv2 in my grandparents’ basement. At the time, I was really into all things nu metal. I loved Korn, Sevendust and System Of A Down and all that shit. But two videos in a row came on that just shattered my entire universe. One was for “Fell in Love With a Girl” by The White Stripes and the other was “Hate to Say I Told You So” by The Hives. It was then I realized that music could hit hard and fucking rock without being all tough, dark and aggro. That’s when I started exploring indie rock and learned that hard rock is sorta better off that way…as something that’s fun and infectious. I try to bring the fun as much as possible with For Sleeping or Jumping.

MYE: (singing) “Twist…Twist”. Um…When you play live are you more interested in the moment or playing the songs perfectly/technique?

GC: When we play live I think that execution is no doubt an enormous priority but an even bigger one, at least for me, is keeping the energy level high. I like to move around and rock out a lot. A live show needs to be a fucking SHOW. That being said, the more shows we play, the better I am at concentrating on both, making sure it sounds as good as it is entertaining. We don’t really need to worry about looking good though. That shit’s in the fucking bag. 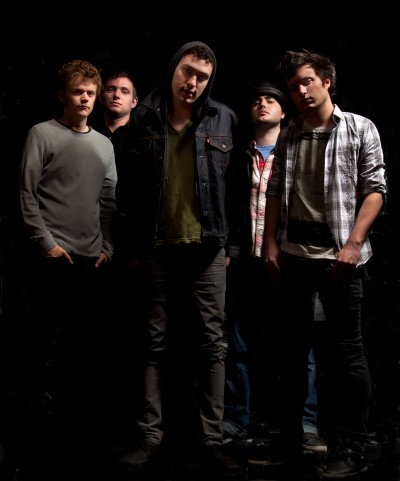 More News On For Sleeping Or Jumping:

More On: Alternative Metal, Exclusive, For Sleeping Or Jumping,
share on: