Interview: From Down Under – Bizz from Our Last Enemy 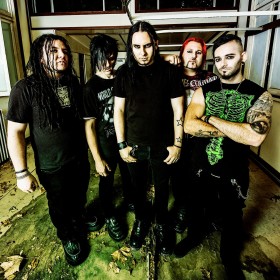 I had the chance to interview Bizz from Our Last Enemy…in umm…well…my bedroom. We talked about traffic signs, their latest album Pariah, and why he doesn’t have an Australian accent.

I was given the opportunity to chat with Bizz from my bedroom via Skype Chat (what were you thinking?!!?) due to us being in completely different countries.  Bizz being in Australia and I being in the United States.

Tell me about Our Last Enemy:

In 2006 the original band formed, at the time I was on tour in Australia with my other band, I joined Our Last Enemy in 2009. We had a tour to do right away. We started song writing right away too. We really meshed well and everything turned out great. We were fast paced right away, we signed with our record label Eclipse a while back.

Why the name “Our Last Enemy”?

Our name came from the quote “Our Last Enemy is death” from the Bible — it was just an interesting passage they took from. There’s no religious affiliation or anything like that. I think Matt came up with it.
Did u blend in naturally since you joined the band after they had already been together for a while?

When I first got the call I needed a break , to take time off, then I decided I would go out on one tour with them and see how it worked out. I had tons of fun and it turned out to be really cool. There were a lot of different techniques I had to get used to, they were more towards the metal side, and I hadn’t played metal in 7-8 years. We all meshed as friends really well.

3 words to describe your band? 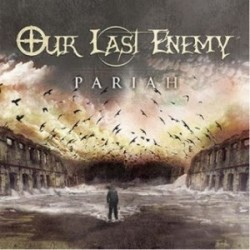 Tell me about Pariah— why the album title?

It’s a loose concept album, the character is a tortured soul, he is surrounded by destruction and chaos. Sometimes he causes it, lives in and wishes he was dead, he manages to live through different things. It started as two songs, Pariah A.C. and Pariah D.C. The Pariah makes appearances in the songs.

At any point, did Pariah have another Working Title that it was almost named?

No, we bounced off titles, threw titles around, nothing really stuck before Pariah. I can’t remember half of what we came up with originally.

Meaning behind the album cover art?

It’s a post apocalyptic theme, all about that, Oli and I are horror movie fans. Pariah is the man on the cover.

Favorite song off the album/why?

My personal favorite song is “DEVOUR THE SUN” mostly because there’s something about that song about it that I like a lot, put a lot of work into it. If you pay close attention to the details it’s a lot more complex and there’s strange timings , call and answer , all off an idea that started with a riff Matt came up with. It’s evenly distributed work amongst all of us.

One more that’s almost finished, shot with Blackley, Her Name is Murder Productions for “Devour the Sun.” It’s
really cool, I’m enjoying the aesthetics, it should be out very soon, we’re currently wrapping up production on it. It should be out within two weeks.

If you had complete creative control over a music video for one of the songs off the album what song would it be for and what would the concept be?

I would go for “Low” or ” Internus Diablos Verni” , those two tracks are stand out tracks for me, for different reasons,  Internus is a zombie apocalypse song, heavily inspired by that sort of thing, more of a surival thing, not a cheesy blood and guts thing , nothing too cheesy. More like walking dead style.

“Low” would be tougher to do, I haven’t put too much thought into it, too heavy to be a pop single , hit single type of a thing, chorus wise it really stands out. Those are the reasons I’d choose that song.

Your song “10,000 Headless Horses” was featured in the Rock Band video game, what was that like, how did it come about?

That was cool, Christian ( of Fear Factory) set it up, when we found out that they wanted to include the song in the game I was like LETS GO FOR IT! I had to make sheet music for it, which is strange, pull some of the strings together and using programs to make a short cut. We needed BPMs (beats per minute), we needed to know the tempo too. After we got all info to them it became a reality. I haven’t played it. I’d probably fail because it’s so different. I think it’d be cool to play against someone who is really good at video games to watch me get annihilated to my own song. ahah.

Are there any upcoming plans to tour the States or any other country?

Were you born in America?

I was born Florida, I played in several bands in America, I’ve been really fortunate in my career, in whatever I do, I can make it. It’s kinda strange because in America I’m a night owl, now in Australia I was going to bed at normal human hours and waking up at normal hours but I’ve since gravitated back to my old ways , and now I’m back on my old track when you’re a musician you sleep at day and play at night, it’s a transition. There are things I love about Australia and things I don’t like, the roads are inferior to America (forgive me Australia) weird things, just weird signs, especially Sydney, it’s a tourist’s nightmare, no warning so you’re stuck in the turn lane, sometimes theres no signs, the signs aren’t the best on the road, it’s weird and you get lost, normally in America everything is like a grid and pretty much guaranteed, so if you miss your turn, you can probably get back on track, there are a number of things that are weird and a little hard to get used to, but eventually it all comes together.

In America you’re spoiled, there’s 24 hour shops, in case of an emergency stores are open to buy something, in Australia, it’s like everything closes at a certain time, 5 or 6 pm if you’re not in the city things close at 4 pm if you try to eat, its all closed . It does take some adjusting — but maybe it’s better off this way, In America, the company owns your soul, you work when they want you to. Oh and gas stations are called Servo’s here.

If you could pick any venue to play a sold out show at, what venue would it be?

Wendly, make that a sold show for me, I want to make arena metal a thing again! Honestly though, playing shows with good crowds is always awesome, sometimes small crowds are funner than the big ones, any cool experiences are epic. A massive stadium show would be awesome though.

Who are you musical influences?

We have a ton of them, some are spread across the band, some of the are common ties, some are very different, we have Japanese rock n roll, everything from metal to industrial, back in 2000 in that time period, when I was a kid, I loved Alice Cooper, Jeff loves The Deftones. A band we have in common is Faith No More. At some point all of us were a FAITH NO MORE fan.

Other than being away from friends and family, what is the hardest thing about being on the road?

There are three things that come to mind…can I name all three?

– There’s the before aspect: theres excitement, there’s this kind of anxiety. Then thinking “I’m kinda comfortable”, but I know I’m gonna do it, then you start doing it and you don’t wanna come home from tour.
– Then the during: I don’t want to come home…
-But the hardest thing for sure is living out of a suitcase , you lose everything, where is everything and then it ends up in the last place you looked.

Look out for our next music video, our cd just got released on cd and iTunes, go pick it up!

Huge thank you to Bizz for taking time out of his busy schedule to talk to us here at Metal Riot and thank you to Eclipse Records for setting everything up.

More News On Our Last Enemy: