Tech-death psychic riff innovators GIGAN are back with the much-anticipated follow up to their debut (2008’s THE ORDER OF THE FALSE EYE). The latest from the Chicago based mind-benders is aptly entitled QUASI-HALLUCINOGENIC SONIC LANDSCAPES (on the well respected Willowtip Records) and features songs like “Fathomless Echoes Of Eternities Imagination” and “Mountains Perched Like Beasts Awaiting The Attack”. Suffice to say…it aint boring and cookie cutter bozo metal! GIGAN once again worked with Sanford Parker (Nachtmystium, Minsk) to craft a must hear monster.

Morgan Y. Evans: What were your thoughts on direction for the band in the aftermath of THE ORDER OF THE FALSE EYE? With each release you have built on your reputation for being uncompromising in vision. Some people don’t like bands that are too out there but I personally love you guys and Psyopus and find it refreshing. Then again, I also am the type of person who’d rather listen to the weird piano/screaming/grind/chimes tracks on SADNESS WILL PREVAIL by Today Is The Day than most of the pop culture I come across. People sometimes dismiss bands for being “difficult”, but what is it about for you? It is obvious to me you aren’t just trying to standout by being freaks and are making powerful art.

Eric Hersemann: Thank you very much for the kind words! I take GIGAN incredibly seriously and demand that each release be a defining representation of our music within that moment in time. All I knew as far as the direction, was that whatever came out after “OoTFE” had to be the best musical and lyrical ideas I had to offer. GIGAN will always be focused on pure expression and imagination with no limits! Musically, I don’t see GIGAN as weird or difficult, it is just what is in my head. I am honored to know that some people think what GIGAN creates is new and different for extreme music. Hopefully, many folks will find a way to decipher and enjoy GIGAN’s music-but if not- that is just fine with me!

MYE: “Mountains Perched Like Beasts Awaiting the Attack” is one of the most powerful tunes I’ve heard from you yet. The opening is like hearing some weird vortex of locusts or a dog whistle with too much strychnine in your system! It definitely sets a really tweaked out tone and then you just drop the hammer down. Fits the song title really well.

EH: That particular song’s concept dawned on me while on tour and traveling through vast mountain ranges in Wyoming. I wondered what would happen if the things we thought of as mountains were actually sentient beings that could feel and absorb all of the negative energy created by the human race… Musically, I believe that song is proof that melody, chaos, precision and aggression can all co-exist and co-operate.  Very representative of the overall GIGAN spirit and song-writing attitude.

MYE: How did you develop your style as musicians? I mean, that is such a pedestrian question at face value. Life is full of all manner of things that can inspire, but Gigan is both fierce and evocative, like some crazy wormhole into the mind.

EH: Well, I believe all the members in GIGAN have developed their individual musical styles through unique life experiences (environment/upbringing), imagination, inspiration and practice, practice, practice!!! 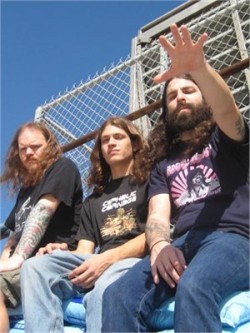 MYE: You’ve shared the stage with everyone from Book of Black Earth to Threat Signal to Zoroaster.Is there any type of band you prefer to play with or come one come all to the slaughter? (Would you play with Slaughter?). But yeah, any crazy stories from the last touring cycle?

EH: GIGAN will share the stage with any competent bands, but we prefer to tour and perform with open minded, fun people that enjoy what touring has to offer. I hate touring with grouchy, stick-in-the-mud types. GIGAN has shared the stage with tons of amazing bands and we are proud to have shared the stage with all of them! Well…most of them! As far as tour stories go…sorry, those files are permanently sealed!

MYE: QUASI-HALLUCINOGENIC SONIC LANDSCAPES is certainly a mouthful, but is a fairly good assessment of what you get when you hear the record. Shit…Actually, I’d say it’s a full-blown hallucinogenic odyssey! What was behind the title? Did you ever get into any Terrence McKenna? I don’t really do drugs any more but I had great LSD trips and also a few really horrible ones. Still, I think that it was good to have a bad low on that drug because it made me really analytical and have to later on run my brain through a process that with time has allowed me to remain objective, instead of say, hitting the rocks on another drug that is more physical pain than mental? Does this make sense? We’re all on a journey.

EH: I wanted the album title to let people know exactly what they were getting into. LSD can be brilliant in the right hands but it is rarely used properly. Yes, we are all on a journey…but proceed with caution!

MYE: What can you tell us about the title of “Skeletons of Steel, Timber and Blackened Granite”? It reminded me of how many places in the U.S. have all these run down skeletons of former factories looming above ghost towns or in formerly booming industrial areas or the middle of nowhere.

EH: I am glad it made you have that train of thought…but- That song title reflects the landscape of a planet post-intergalactic hostile invasion! However, that is one of the cool things about GIGAN’s music-it can be many things to many people!  And I love that!

MYE: Gigan is obviously a name derived from the monster tradition and I was wondering if you had any thoughts on the current sort of re-heightened nuclear fears that have been in the press (which Godzilla and his buddies/foes were sort of allegorical for).

EH: Actually, GIGAN is a Japanese word that means “false eye”… and is used in the context of the GIGAN Universe as your “mind’s eye”. As far as the Japan tragedy-it is just that. I send all those affected by it my positive energy…they are an industrious people and I am sure they will overcome their new challenges!

MYE: Well said. How did the band get involved with Willowtip Records for this release and would you like to share your thoughts on the label?

EH: Willowtip was the only label that was willing to give me complete control over GIGAN and had killer distro. Willowtip also focuses on quality music-not trends.  I am actually proud to be associated with WT bands.

MYE: How was it working with Sanford Parker this time around? Any new approaches you wanted to try together? You’ve had prior experience working together. How has that grown into the dialogue that allowed you to create this new monstrosity? Also, can you tell us about the cover art? I like the sci-fi meets occult meets alien/magick feel. I always love when an album cover pulls you to another world or mental zone, like Pharaoh’s BE GONE or Heathen’s “The Evolution Of Chaos”.

EH: Working with Sanford is always a pleasure. He and I have been working together and have been pals for over a decade and that allows both of us to be comfortable with the others incompetence. In all seriousness though, the experience was excellent as always and he is an integral part of the GIGAN Universe!!! He always has some cool ideas to contribute, sound-wise and we tried some new stuff this time around that really came out great!

The album cover was done by Dr Winter- an ally of GIGAN that lives in Austria! He worked with my concepts, combined them with his own imagination and did an amazing job!!! He and I went back and forth with sketches and emails for months and the end result was incredible!!! I really feel he captured the essence of the album and gave the world and incredible piece of art!!! Special thanx to Dr Winter!!! 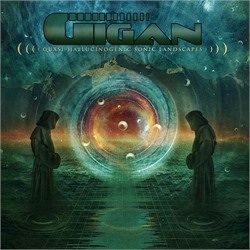 MYE: What are you excited about musically these days, whether upcoming plans of your own or other artists?

EH: Other artists…THE NEW AUTOPSY ALBUM!!! Been a fan of theirs since their demo days…so glad to see them back and getting the attention they deserved 20 years ago!

As far as GIGAN: I am definitely excited for the upcoming tours in support of this album! The first of which is with GRAVE!!! That tour starts in august and runs through September! Hope to see you all out there!!! Thanks so much for supporting the GIGAN Universe!!!