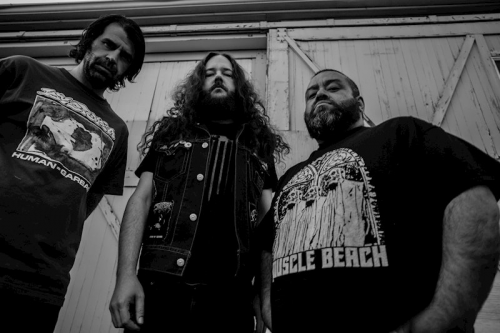 By the time the thunderous intro to “Shackled To The Burning Earth” from Denver band Glacial Tomb‘s outrageously good self titled debut (Gilead Media) hammers home with a bigger scowl than Kirk Windstein stubbing his toe, listeners are coming into the home stretch feeling exceptionally rewarded. It is so cool that a handful of bands this year (Un and Forn come right to mind on the ‘extreme’ circuit of underground metal) have managed not only to create great works but to shatter limitations so well that you are too busy experiencing their records as powerful works of art and energy to notice they upended some genre lines. For Glacial Tomb, doom flirting sludge and Gorguts loving death blur into one perfect storm with clouds of melodic guitar cutting through these intense moods like pain-charged lightning gathering around a dark mind. This is an outstanding fucking record I already hold in very high esteem. It should be on everyone’s short list for must purchase in 2018. 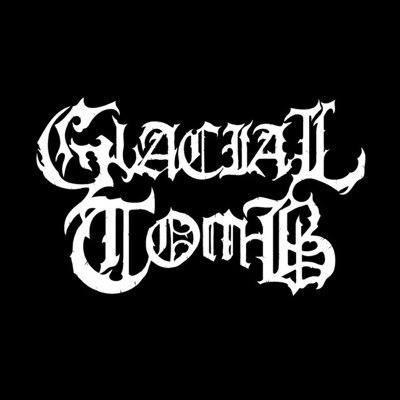 How does it feel to have your debut arrive? Gotta be a rush, no?

Ben: Cheers! We are all incredibly excited that the day is nearly upon us, especially since the album seems to be resonating with a lot of folks. The last couple of years have been really brutal for the three of us — a sentiment I’m sure many can get behind for myriad reasons — and we are all incredibly proud to have channeled the darkness into something powerful rather than letting it consume us. 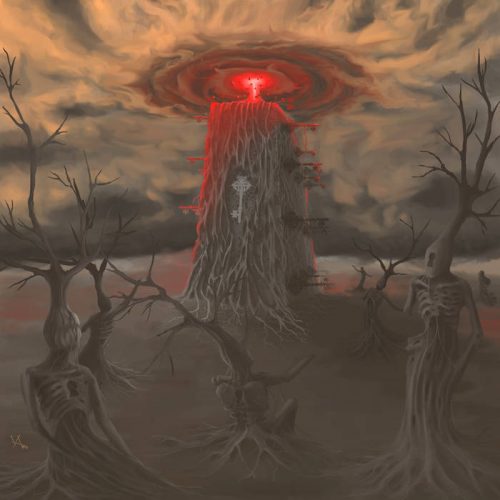 “Sunless Dawn” has a crushing intro. There are great moments where the momentum of your songs shift or wild guitar accents preface and set up another part in a complementary way that builds more and more brutal spires. I think some bands are always on 10 but forget you can sometimes kick energy up even higher if you build to it or even if you start out super hard but had additional segments to intensify rather than one constant hammering. Like, some bands make the whole point getting to a derivative breakdown (not that I don’t like actual good ones), but your band feels more classic and remembers the parts along the way can add to the full experience of reaching the peak or “lowest depth” of evil moment.

Ben: Thank you. There are lots of extreme metal bands of all sorts that are, as you put it, always on 10. Don’t get me wrong, that has its place — sometimes I just want a nonstop barrage of blastbeats to decimate me. That said, we knew from the outset that dynamics had an important place in our music; even though we’re ostensibly playing death metal, we’re trying to exorcise a lot of personal demons as well as tell a series of stories that connect to different parts of our lives in a variety of ways. By pulling back a bit here and there, by varying the pace and feel of the riffs, we feel we’re able to create music that has a bit more atmosphere and can offer unexpected twists to the songs than if we’re grinding nonstop.

Connor: I agree with all Ben said. The dynamics of the songs often mirror the subject matter and the intent behind writing them. The band has always felt like an outlet for intense self reflection. Truly looking yourself in the eye without averting your gaze can be unsettling and paralyzing.  I think we were able to maintain that kind of focus when writing the lyrics and putting the songs together as a group while respecting the devastatingly barren moments.

How does it resonate in you playing this material over, say, epic metal or other stuff from different bands you have been involved in? Do you try to just channel whatever feelings are stirred up by this sound and material as a unique moment or is it hard not to compare and contrast? I love that there is the technical aspect but not at the expense of old school brutality and songwriting also. One of the only other bands I think doing that as well right now would be, perhaps, Pyrrhon (“Implant Fever” comes to mind). But your production sounds and tones are better. I mean, I guess the bottom line that matters most is you both sound like you could hang with different eras of Gorguts and not get mad about any of it being on the stereo, haha. Maybe that is what makes a band great, lol.

Ben: Playing in Khemmis gives me an outlet for a lot of pain and sorrow; Glacial Tomb allows me to channel the uglier, more misanthropic parts of myself into the creative process. Anytime I sit down with a guitar and start writing, I can immediately tell which project the music is best suited for because of how it feels to play it. I also unconsciously default to certain kinds of phrasing for each project; in Glacial Tomb, I’m never trying to channel Judas Priest or Metallica, you know?

And thank you for the compliment — Pyrrhon rules! We played with them at Saint Vitus back in June and they melted everyone’s faces. That band is incredibly intense. And you nailed it with the Gorguts connection, man. Luc Lemay is on the short list of folks I’d consider “guitar heroes.” Everything about his output with Gorguts has impacted how I think about creating heavy music.

Connor: Playing this style of music allows me to explore places I’ve compartmentalized and evoke an authentic expression of my experience in visiting and revisiting those places.  I’ve learned that without the opportunity to make this kind of music and navigate those parts of myself, I’m a goddamn mess. This record carried me through an awful period of time.

I’m always trrying to channel Judas Priests TURBO. How’d you end up working with Sherwood Webber? I’ve been a Skinless fan a long time. Fuck yeah. That song is ominous. The melodic guitar textures are super exciting. Any specific influences that inspired that one or did it kind of come together of its own accord? I like the mix of melodic dissonance and kind of classic death metal chug parts.

Ben: Sherwood’s been a friend for years. I first met him at Denver Black Sky in 2015, and we’ve been buds ever since. He came out to the earliest GT shows and we kicked around the idea of having him lay down some heaviness with us. He first joined us onstage at Denver Black Sky in 2017, and when we wrote the chug/slam bridge in “Drowned” we just knew his voice would be the perfect fit. We were thrilled that he was down to contribute guest vocals to the album, and we’ll have him sing it onstage with us anytime he’s around.

What brought you to Flatline Audio? How was the experience? I mean, if they recorded Archspire there they can handle engineering/mixing a lot of weird crazy parts, lol.

Ben: Dave Otero is a phenomenal engineer and producer. He doesn’t just track bands, he pushes them to create the best album they can when they’re in there. He’ll suggest changes to drum fills, guitar lines, vocal patterns, and even what kind of pick a guitarist uses on a given passage. I’ve recorded with him in Khemmis for the last several years, and it was a no-brainer to return there with Glacial Tomb. There are a ton of small changes that we made between preproduction and tracking the record because of his input, and those little tweaks are what truly pushed the album to the next level.

Connor: Dave is amazing. It was the most comfortable and productive collaboration I’ve ever had in the studio.

Is this project going to get the masochistic TLC a full time band receives or is it a side thing with nonetheless a life of its’ own?

Ben: While Khemmis is my primary focus, rest assured GT will be out grinding faces anytime Khemmis isn’t on the road.

Connor: We’re all busy with so much other garbage, but still make GT a priority. I’m not keen on forcing anything and would rather allow things to develop naturally. So, we do what we can and I know we’re all very happy with what we’ve accomplished and have a lot to look forward to as well.

One thing I always liked about Lamb Of God or Corrosion of Conformity is that main dudes in those bands always made sure their fans saw the value of punk and metal’s influence on one another. I dare say I hear a little Napalm Death influence in parts of “Breath of Pestilence”. They are of course another example. Do you think your record collections have been refined over time or are you still mainly into the same shit as people you have always liked? Also the thumping slow section of that song with the sad sort of sharp melodic guitar that then goes into wild dueling leads stuff…so many vibes in one song. Must be crazy to have to memorize but maybe not if you are stoked for each next part coming up as a player.

Connor: Man, I’ve gone through so many damn records in my life but I always find time to circle back and listen to those closest to my heart.  I’ll never get over old Carcass and Napalm Death. But, all three of us have wildly diverse tastes and even more varied backgrounds (e.g., life experiences, past bands, careers), so we’re always challenging each other to make each song something that we find compelling and would listen to on our own.

That’s very cool and will undoubtedly keep it interesting for you as well as us fans! Do you think that being a Cat is kind of like taking mushrooms a lot? They have intense vortex eyes, like, “wahhhhhhh’. They also seem telepathic sometimes.

Ben: My wife and I have two dogs and a cat, and our cat is basically a third dog. She likes belly rubs and is just as food-motivated as our basset hounds. I’m pretty sure she’s not telepathic, though. Or, if she is, she regularly misinterprets the thoughts she hears in my brain. But she definitely seems like she’s on hallucinogens a lot, especially at night when she perches at the top of her cat tree and just stares. Maybe she’s gazing into the abyss? Perhaps Nietzsche was talking about how weird cats are, and we just read WAY too much into it?

Connor: I’m going to name my next cat Terence McKenna.

Ben: Tomb is just a gnarly word, you know? I’m not particularly familiar with the latter, but we all fucking LOVE Tomb Mold. That band name just has the most excellent vibe to it, and it compliments the churning, unsettling riffs perfectly.