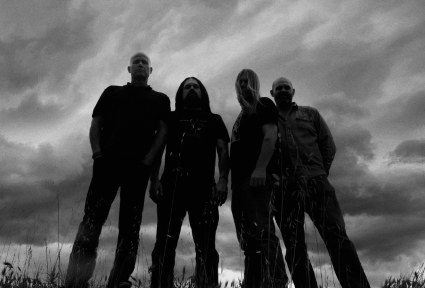 Goatsnake emerge and reclaim their heavy throne with Black Age Blues. “House Of The Moon” shuts down any foolish few critical of the stomping immensity of the Goatsnake ride well before the vocals even come in, and it is just one of many examples of what makes this band more venomous than ever. After fifteen years the band is back strong and fans will revel in the heavy, deep from the Earth rock vibes on this must have class of 2015 doom entry.

I caught up with Greg Anderson via phone from his lair at Southern Lord Records and he answers my questions BELOW.

[youtube]https://youtu.be/WK7DGwCqH6k[/youtube]
I loved Trampled Under Hoof years ago, then got into the reverse history of
the band. Then became a big fan of Sunn O))) and Ascend. It’s cool to hear you
riffing out on this new Goatsnake stuff, again. Not that it is a simpler
approach. It still has a lot of character.

Greg: Absolutely. It’s a totally different beast than Sunn O))). It follows a way
more traditional path of structured, heavy blues. For me, it’s just really cool
to have two different outlets to work within. Sunn O))) is more free form and
experimental, more making a piece of music than a song. Goatsnake is about
making songs together as a group and creating riffs that are part of an actual
song.

G: Mmmm. Well, it’s interesting. When SunnO))) first started out I think
Goatsnake wsa about redy to make our second record and was active. When Sunn
O))) came out no one really got what we were doing. Stephen and I kind of
expected no one would get what we were doing or even that it might not get any
success at all. It was pretty abstract sounds and noise. We knew that but
after awhile I noticed people into bands like Sleep, Goatsnake and Saint
Vitus…the doomheads were into what we were doing. I think there’s some
crossover between groups. Obviously Sunn O))) reach into an avant garde scene
where Goatsnake might not reach, but some people will be drawn to the
repitition and drone in Goatsnake as well.

Sure, Goatsnake almost has that slower C.O.C. heavier vibe but with Pete’s
vocals really evolving from Scream in a cool way, and Scream was great.

G: I think as far as Scream and Wool and Pete goes, those bands – at least
Wool- was more of a traditional rock band that made catchy rock songs. Scream
was obviously from the punk scene. Goatsnake is a rock band as well but the
influences are from a darker and heavier place.

Sociology wise as a fan, it’s cool to see the connections. It was fun to see
Pete get some shine on the Sonic Highways record and HBO show. Even what you
do with Southern Lord, you put out the Brotherhood re-issue. You see the
threads and fans can say oh, the Sunn O))) guys got into punk, then doom, etc.
You can see development of artists between projects and follow their growth.

G: Absolutely, I see our releases often as part of a family of recordings. To
show how things and people got started. For me I wasn’t sure The Brotherhood
record was something I was gonna put out, but I’m still really close to all
those people. I thought it was interesting to show a different side musically
and ideology/lyrics wise as some of the bands these guys are now involved in.
It’s just a different side and really the roots of everything. I think it’s
important to document that properly, y’know?

Yeah, absolutely.I like hearing Mendel pre-Sunny Day. Or you guys are putting
out the NEW Poison Idea and who knows if this will be their last record? It’s
another way to prop up those corners of the scene.

G: Yeah, absolutely. I think, my comment about not being sure if it (Brotherhood) was the
right move for Southern Lord to make, I think I was being self-conscious in some
ways but it really makes sense in a lot of ways for the bigger picture. It
ties together and is important.

Some people will always associate you with doom and drone as a label but those
genres eventually loop back to punk and even jazz anyway. Black metal.

G: Yeah totally. I’ve always been unvomfortable with label restrictions. I
don’t feel comfortable being limited by the one specific thing. It’s boring
and kind of the death knell for labels doing only one thing. It has to connect
and hit me in a certain way rather than the genre alone.

Totally, you can even hear this in the album name for “Black Age Blues” or…I
loved the intro to “Another River To Cross”. “How are they gonna start this
record?,” I asked myself. You throw it on and it’s like this overheard
chanting thing that could be on a Sunn O))) record and then roots music in the
background and then this heavy Goatsnake riff. And lots of titles like
“Killing Blues” or “Coffee & Whiskey”, the images like Killing Floor or old
Chicago blues comes to mind.

G: Yeah, man. It all comes together. There’s a lot of the same tone and
execution ideas and tunings that were the same when Sunn O))) and Goatsnake
started. The tuning was the same in both bands and goes back even further to
when I was playing in Thorr’s Hammer and Burning Witch with Stephen. The
tuning and the Sabbath influence obviously, it’s all there. To me it makes a
lot of sense (laughing). It’s all related.

I would’ve mentioned Burning Witch but in case there are newer readers I
thought I’d keep it simpler, since you’ve done a lot of bands. But also
cuz…Burning Witch have to stay a little more secret (laughing). Which is
pretty snobby of me in 2015. But they should have to do a little work to find
out about Burning Witch.

G: (laughing) Yeah. I think that’s great. Yeah, you should have to
(chuckling). But that was sort of…Thorr’s Hammer and Burning Witch were very
short lived. I moved to L.A. and started up Goatsnake. We wanted something a
bit more with a groove, whereas Burning Witch was very sludgy. That band was
amazing but Goatsnake wanted to incorporate a different flavor to the
heaviness.

I love this record is coming out now. You have some great stoner bands like
Mothership from Texas or my friends Geezer come to mind, but it’s always good
when some more boogie gets in there amidst the heavy, bluesy riffing. Reminds
the scene where a lot of shit came from. It’s eternal.

G: Yeah, to me each genre has amazing bands in it. It takes effort to find and
discover that.

G: (laughing) Yeah. It’s all about connecting with it in different ways. It
can happen in mysterious ways too.

How did it feel tracking this? Some of it has a good live feel.

G: We did track it all live. Bass, drums and guitar all in the same room
without a click track. An achievement! The vocals were done after the
instrumental tracks were recorded. For us, when writing the music there was a
really good feeling and chemistry between all of us. Our goal and vision was
to capture that and hopefully get it recorded. We were just jamming in our
rehearsal room on some of the stuff. Minimal overdubs. It was really about the
basic tracks and the feel and vibe being the important thing.

It sounds really great. Did you feel, knowing it would be scrutinized, that
you had to take more time?

Definitely did it on our own terms but with that said, we have immense respect
for the fans and the fact that we’re even in this position at all. I thought
it was amazing that people still wanted to hear the old songs when we got
invited to play the Roadburn Festival in 2010, kind of the first thing
recently we did. It was amazing seeing people singing along, a couple thousand
people, to these old songs that were, y’know…over ten years old that they
still liked. It was unexpected and we were all really thankful. Out of respect
for our fans giving us a gift of a second chance of playing again, our gift
back to them is this record. It wouldn’t be appropriate to break into a funk
song, even though we all listen to it! But we still wanted it to be the
Goatsnake sound. The tempos stretch a bit and are more uptempo than the past.
We changed the tuning a bit and tuned up, but it’s still very low. We explored
and worked a lot harder collaborating with Pete. This time he was writing
vocals while we were writing the music, in a closer manner. Now the band is
way stronger than it ever was and I’m hoping the record reflects that and it
comes through to people. So, yeah…we did it on our terms and it’s four dudes
having fun making music together. But we also do it for the fans.

Well, even if I didn’t like Goatsnake as much as I do, I’d still give you
props because I think I found out about Black Oak Arkansas from you guys. 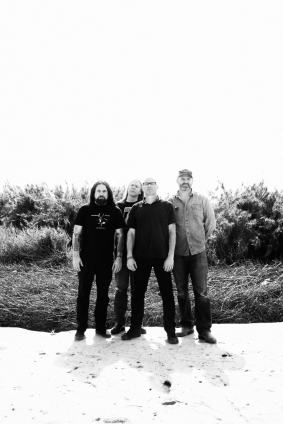