Interview: Grogus – An Extension Of Friendship 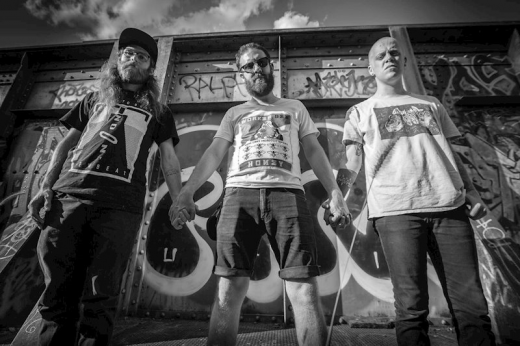 In my experience the underground music world doesn’t necessarily reward
being a good person and lifting people up or whatever, but you should still do it
because it’s the right thing to do. -Boone Epstein

Sorry for the light amount of posts this week, metal family. My doggo best pal of 14 years passed away a week ago today. She was basically my fur daughter and I have been a flat out hot mess of sads, so only got up an Angel Witch post this week. Y’all know the new Slipknot is out already so let me assume some of you have already headbanged today and let myself off the hook a little. Regardless, We have a great interview with a rock solid cosmic death metal mutation known as Grogus for you kids to make up for a slow week around here. Because it never hurts to have more metal goodness!

This Minneapolis band of real deal musicians have released a new tape with our friends at Tridroid Records (grab it HERE). Entitled Four Kings, the release is one of the most satisfying excursions into the wonderful weirder side of sludgy experimental death. I love how taken out of a musical context that just sounds like falling into some Gotham lab ooze. Anyhow, let’s check in with Boone Epstein and get the lowdown BELOW.

How did you all meet? I was not familiar with your earlier work and so was blown
away by the new stuff with no prior reference. Killer release! Have you been a
band long?

Boone Epstein: The three of us met at Macalester College, which we all
attended, and then ended up living together shortly after college. We started
Grogus in 2014 as a joke, and have kept it going because it’s fun for us and it’s a
nice excuse to hang out.

How did you become involved with Tridroid Records for this release? Was it a
hard album to track? The arrangements are pretty darn elaborate but you
managed to instill them with some real passion as well as technique! Fuck yeah.

Boone Epstein: We like Tridroid’s catalogue and it’s run by a super rad queer
lady, Christine, so I felt like she would vibe with us more than your typical metal
“infernal hailz bröther” dudebro. I sent her some early mixes and she liked them.
This record wasn’t super hard to track but it was a little more difficult then
the last one. We recorded Intuitive Readers and Metaphysical Artisans
completely live so it was pretty easy. 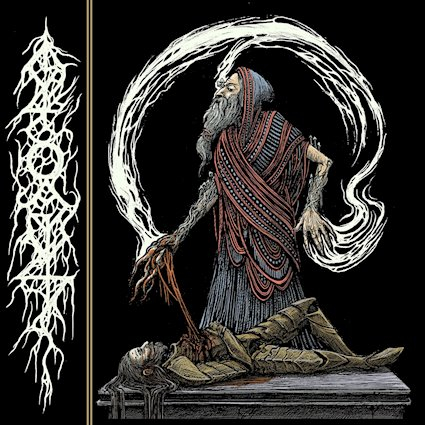 We wanted a little bit of a different sound
with Four Kings so we tracked each instrument separately to click tracks. I think
we managed to knock it out pretty fast. We tracked most of it in one day, with
some extra special sauce sprinkled in on a second day. None of the riffs are too
technical. We have a lot of fun playing this material and it made us laugh a lot
while we wrote it so I hope that comes through when you hear it. I was worried
that some of that fun would get lost by not tracking live.

It is a semi-cluttered field for metal bands right now and depending if glass half
full or empty type, some argue diminishing returns. I tend to think the
underground is more close knit than ever and if you are cool people will support
and lift one another, to a degree. Are you worried about standing out or just more
concerned with doing your own thing and have you felt like people have been
positive or get what you’re doing?

Boone Epstein: We’re definitely just doing our own thing. A lot of people have
reacted positively to this band, and that’s a bit surprising to us, but it’s nice to be
able to connect with people in that way. Grogus is really just an extension of our
friendship with each other so it’s kind of like letting people in on an inside joke. A
lot of folks have also been pretty confused or put off by it, which makes sense.
It’s a weird band and I think most folks want something more straightforward.
In my experience the underground music world doesn’t necessarily reward
being a good person and lifting people up or whatever, but you should still do it
because it’s the right thing to do. We’re definitely drawn to people who are good
humans, and we’ve found that they usually make cool music too.

So, “An Ocean Tomb of Centipedes”? That sounds horrific. Sometimes they
crawl on my floor and freak the shit out of me. Do you think it is inevitable for
death metal fans to get into the idea of monstrous ruins? No shade. Also, like
Glacial Tomb who I dig, your sound to me seems to have some Gorguts
influence. But more hardcore moments in there as well. Do you just sort of write
what comes out and not worry or was there always a vision of what influences
you wanted to meld?

Boone Epstein: We don’t take song titles and lyrics very seriously. They’re
usually jokes, or ripped directly from a video game or a book. That lets us focus
on the music on it’s own in certain way that we like. Not every band benefits from
that kind of segregation of elements, but this one does.
The riffs are definitely influenced by bands like Gorguts, and maybe most
significantly Krallice in terms of chords and atmosphere, but yes, like you said,
we take a more hardcore approach rather than a metal one. There was never a
plan to have Grogus sound a certain way, but we’ve found a certain
amalgamation of sounds that’s fun for us. I think over time we’ve developed an
intuition for what sounds right for this project. Also shoutout to Glacial Tomb they
rule! 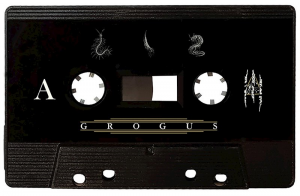 Well, you’re doing it right and the combination kicks ass. What have been some of the most memorable things the band has gotten to
do so far?

Boone Epstein: This band has definitely let me pet a lot of dogs I might not have
met otherwise and that’s pretty great. I can remember each of their faces and I
hope to never forget them.

You have a song called “Goat Temple”. Goats are actually kind of cute. They smell but are pretty much rad. Why are
they the epitome of Satanic evil? I think Centipedes are actually grosser.
Especially human ones. Or like, a Goatipede would be fuckin’ super punk.
Thoughts?

How did you get the disgustingly rad and thumpy bass tone on this record? It is
like extra chunky soup, except riffs. I love it.

Boone Epstein: Live I use a Sunn Beta Bass with mismatched impedance and a
germanium fuzz. On this record we tracked through that rig, a Sunn Model T, and
an Ampeg VT-22 simultaneously. I’m not sure exactly how Sam Lewis mixed those sounds, if the levels change much, or if they’re even all there all the time,
but he made it sound super busted and nasty which is what we wanted.

Who did the artwork for this? The tape layout is super dope

Boone Epstein: Stephen Wilson did the artwork and layout! He’s so talented and
we’re beyond stoked to have his work representing this album. You can check
out his stuff at https://www.unknownrelic.com/