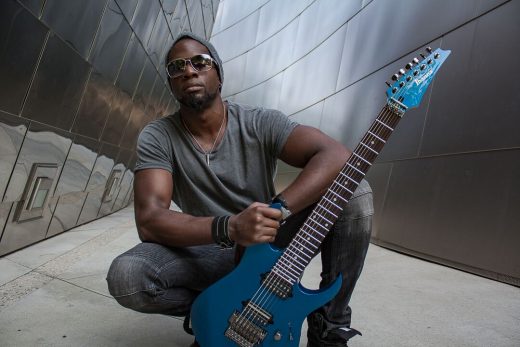 It is not often you hear someone as clearly at home with a guitar in their hands as true virtuoso Al Joseph. I don’t listen to mostly instrumental guitarists that often, though I do get down to some Marty Friedman and love Scale The Summit, but I was so blown away when I heard Al Joseph’s recent stratospheric All Of Creation record that I had to track the man down and ask him about writing it, his technique, inspirations, hope and dreams, etc.

What a cool person! I promise if you listen to this record you will be very inspired to create, experience and LIVE! Satriani, Pettruci, Townsend Project and Reid fans will be into this for sure, but really you don’t have to love technical leads to find a human element here to latch on to. We here at Metal Riot highly advise you make some time for Al’s amazing art.

There is a very beautiful sense of freedom and yet also confidence paired with moments of sensitivity and almost awe for creation in your playing. Some flashy lead type stuff but also just some really feel good parts like in “Shift” that sort of just make you feel good to be alive. I was super down the other night and that song really changed my mood. How long did it take to make All Of Creation? If you say seven days I will laugh.

First of all thanks for having me. I’m so glad the album had an effect on you the way it did because I made it to do just that. Uplift and motivate people. Between work and juggling my other responsibilities in life I have to say this album came together rather quickly and effortlessly. Couldn’t have been more than three or four months of writing and recording if I remember correctly. The mixing and mastering is what took the longest.

Were you born playing the guitar? Haha. But seriously, you must have some calloused fingers! The speed and mastery of technique is thrilling. What do you feel defines your style, or is it always growing in new directions like tree branches?

Sadly the guitar found me about 10 years too late from birth LOL – I find I’m all always growing in some way or fashion as a musician. However, deep down I’m just a heavy metal guitarist, nothing else. I play other styles and I grew up on a lot of them but it was always heavy metal and prog that made me pick up my guitar every day.

So you were a Penn State Running Back? That’s cool. I grew up loving the football running game even more than the passing game as a kid, at least watching it cuz I was wicked skinny hahaha. Nowadays it seems like the emphasis is all on the QB’s and I kind of miss the more varied emphasis. What teams do you follow, if any? And when did you realize you were going to do music instead? I mean, not to knock star athletes but a musical gift like yours seems even more rare to me than a great running game.

Well it’s a bit of an elaborate and embarrassing story LOL But to keep it short, in hindsight, I made the team and very shortly after that I was released because my grades fell. Between practicing guitar and working out literally all day every day I just couldn’t motivate myself to keep up on my studies LOL. I hated school and loved music and football LOL I loved training my body and I loved guitar. In fact a handful of my coaches at PSU attended a church I played at for a while. I think they got the picture after they caught a few of my live performances that music was always going to win this marathon.

Don’t feel bad, man. I dropped out so my old band could open up for Orange 9MM and so I could write about music full time. It was hard but in the end I do what I love! Anyway, now that All Of Creation has been out awhile, have you been writing new songs? Do you sort of just play and play and then compile sections or things you come back to? I have always been good at arranging for more linear rock bands with vocals, but I can imagine as an instrumentalist there might be some tendency to accidentally just keep jamming out. Do you sort of compose the body and then add all the intricate layers in the studio?

I’ve lately been itching to write new stuff. Namely a combination of tunes with both vocals and instrumental pieces. I used to sing in a band for years and it was always a battle for me wanting to just play the guitar and being the singer. But now I’ve been feeling it’s time to let that side out again and start singing my ass off LOL. As far as jamming goes, I love to jam, but I’m a composer at heart. I’d much rather be playing and reliving my own compositions on a real stage for a change. That’s about to happen very soon. Can’t wait.

“Shogun” is pretty forceful. I mean that powerful intro and the leads could almost fit in a Lamb Of God or Arch Enemy set! Do you follow a lot of more extreme bands? Your stuff is clearly more progressive but I love the amalgamation of styles. It takes you places.

Thanks! It’s pretty weird. I grew up with mostly music from the 90s and 2000s so most of my influences include bands like Korn, Sevendust, POD, Pillar, Creed (yes Creed), Skindred, and Alterbridge. Dream Theater and Symphony X pretty much sum up my proggy influences. Now when it comes to more extreme metal I just don’t know. I pick things up as they come and go to be honest. I tend to stay on the more melodic side when listening to metal though.

Are you still in L.A.? Do you find it is hard to stand out there or is it still easy to find commercial work or creative work as long as you have the skills and drive? Jay Hale is a good player I like who is out there.

Yes I’m in LA. To be honest there’s a lot of reasons I love being in LA and there’s a lot about LA that just plain pisses me off LOL it’s been such a love hate experience but I think that comes with the territory. The fact that there’s so much competition out here reminds me that I’m not out here just for fun but I’m out here to get to work. I welcome the competition. It’s fun for me to compete for the spotlight. But I’ve always felt like I’ve got my own torch to carry so it doesn’t bother me. LA is a great space to be in if you want to stay around creative people and stay inspired enough to work seriously. 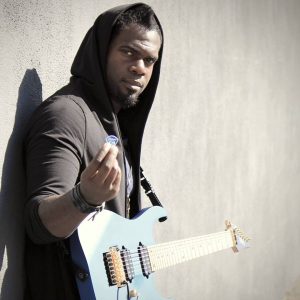 What are a handful of deceased guitar greats from the past who you would love to jam with? Not being morbid, just trying to make you feel good imagining it, haha.

Wow. I’d love to jam with BB King, Jimi, Jonny Winter, and most of all Stevie Ray Vaughn. To be honest, those players are not my main influences but I’ve always asked myself what guitar would be like if they were still alive. I think people take the guitar way too seriously and these guys were the best because they just didn’t give a shit. Just played their asses off. Would’ve been interesting sitting in a room and just watching them go at it!

Do you think it is sort of common for young musicians to think they have to pigeonhole themselves into one style? Or is that a result probably of just wanting to be ‘like’ the bands you like?

To be honest I don’t think it’s wrong to stick to what you’re good at or just stick to the style that inspires you the most. You can’t do it all. It’s just impossible and from a state of inspiration I don’t see the need to be able to do multiple styles. For instance, my time at Berklee College of Music. I know so many musicians there who have been seduced by the notion that if they can master jazz they can master anything. Or that playing multiple styles makes you a better musician. The truth is often contrary.

The most successful musicians or artists I know of in terms of influence and impact on a wide variety of people, are really really great at one thing. They can do other things but they still have an impactful home base that they’ve pioneered to the very top of the scale. I fell into this mindset that I have to “do it all” while I was there at Berklee and let me just say it feels good to be back home LOL .When I finally dropped everything and decided that progressive metal was my way of life, things took off for me and I’ve never looked back since. I knew my direction and ran with it!

Do you feel discouraged that less people are learning how to really play guitar well these days as other genres besides rock gain prominence? Or will it only serve to make the top players stand out more?

I think both are true. To be honest with you I think it’s great no matter what genre or field of art you are in. I think it’s great that there are only a few that are meant to do that certain things. So many of us are pushed into activities for whatever reason that we weren’t meant to be a part of. Take me with football for instance. Yes I had some talent and overwhelming work ethic but it was an uphill battle my entire life to get to that point. It just wasn’t what I was meant to do. I spent 10 years trying to be a part of a program that wasn’t meant for me. I want to make it as a guitar player to inspire people to search themselves and find their strength, not to be like me necessarily. As far as other music gaining prominence, I’m very glad for this. Artists should always be mindful of the trend. Not to copy the trend but to be reminded of when the traditional way of doing something has run its course. For instance, I listen to a ton of R&B, Neo soul, and pop prog music big time. My love song “Eve In Flow” is a great example of this. This inspires me when writing music. It keeps my ideas fresh and reminds me that there are many ways to approach things musically. So in that regard I’m not worried I’m just even more inspired! 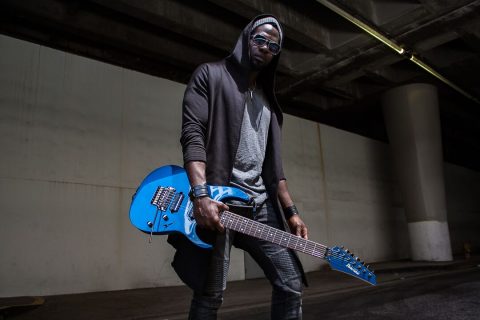