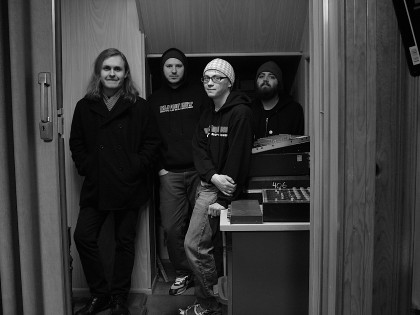 Hindsight is always important, but now there is an important band called Hindsight as well.

Click HERE for our interview with the Pittsburgh hardcore crew about their rock solid full length Draining Satellites. Crank “Unearth, Sustain” and you’ll be hooked from the jump. 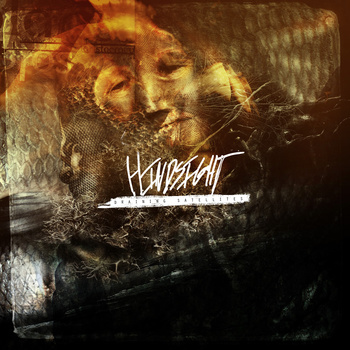 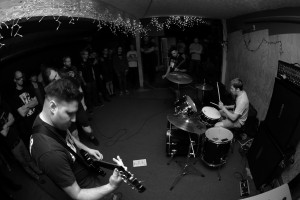 1.Draining Satellites is a great record. Some really infectious parts on there from that first big groove of the intro to the barely two minute blast of “severance”. How was the experience of making this record?

CS: We worked with Matt Very at Very Tight Recordings here in Pittsburgh. It was a great experience all in all – Matt did a lot of work getting this release to sound heavy and punchy. We cant say enough about how good it was to work with him. It was recorded between two days on a weekend at the end of May. Some of us were sleep deprived and over worked but it all came together really well! There was a lot of hard work put into it and an equal dose of hilarity too.

2.Do you feel like you accomplished the statement you want to make on the scene musically with this first release?

CS: Yes – we are very happy with the way Draining Satellites turned out. We’ve had an extremely positive response overall to the record. We’d like to get it pressed and in people’s hands in physical format eventually.

3.Let’s talk about the eye catching cover art. It almost reminds me if Dave McKean of Sandman fame did a hardcore record. I mean, technically he did an Earth Crisis record but it was Slither and that was slightly nu metal for them. Haha. Still a good album, though. I don’t want to get beat up.

CS: It was actually an older piece of mine that I always wanted to use for an album cover for a long time. I like doing photoshop comps and “collages” that tend to have that Dave McKean-esque style which graces many 90’s albums and comics. Some of my favorite covers were McKean pieces – Fear Factory, Front Line Assembly, Download, etc. I wanted it to look different than a typical hardcore album and have a more ethereal and and dark feel that’s not too clearly defined. You will probably see more of this style gracing our covers in the future.

4.the record flies by like a real hardcore album, or thrash for that matter, probably should. Do you have a lot more songs written or did you throw everything so far on this baby?

CS: We are always writing new stuff – we had to stop and focus on recording there for a bit. We have a couple of new jams we are writing currently that are coming along really well. We will try and get them done and add them into the live set and record them soon. We’d like to do another lengthy EP or possibly a split release or two with the next chunk of music we write.

5.How is the hardcore scene in Pittsburgh? People always hear about Philly is so great, etc. How about your town?!! I love all the metal bands I keep hearing from there.

JK/CS: The Pittsburgh hardcore scene had hit a bit of a stagnant point within the last year or so. A lot of bands that were really active had disbanded and there are numerous new bands being formed and getting noticed. Pittsburgh has a very healthy music scene in general but when you narrow it down to individual scenes, it can get very cliquey and somewhat divided unfortunately. Not to say that there aren’t shows that have a lot of variety on the bill. In many cases there is often too many things going on on any given evening or weekend that it’s hard to attend everything. So basically there’s lots of music of all kinds being created but not enough support for everything continuously. Fests (like Sincerity Fest occurring here in November) usually go over very well here boasting stacked lineups and good support from local and out of town bands and people. Some great bands from Pittsburgh to check out: Eternal Sleep, Complete Failure, Purge, Killer of Sheep, Old Fears, No Time, Blood Red, Hounds of Hate, Egality, Eel, Radium Girls, Post Mortal Possession, Wrought Iron, and Zeitgeist, among others.

CG: I love the diversity and the amount of unique bands coming out of Pittsburgh, but as Chris said, it’s almost too saturated here. It would be nice to see promoters working collectively to combine bills/mix bills so that could work more so in the favor of collective growth here. Some people who come to mind immediately are Adam Thomas and the Root Of Evil Collective. They put on a lot of diverse hardcore and punk shows and are engaged in mixing things up giving all ends of Pittsburgh underground music spots on shows. As far as local bands go, Chris listed most of my favorites already. I also think people should check out Unstitched. That band has been one of my favorite local hardcore bands for awhile and I personally believe they embody a lot of very important things to say and acknowledge with their music.

6.What are some of the influences that went into this album?

CS: We like to incorporate lots of 90’s influences into our music (obviously) but there’s other elements that get added in to keep things fresh. We like a lot of different music between the four of us and I think those tastes come through in our music. Some bands that heavily influence us are: Indecision, One King Down, Damnation AD, Unbroken, Snapcase, Overcast, Despair, Disembodied, Harvest, Strain, Foundation, Deadguy, Trial, Bloodlet, Converge, Coalesce, etc. CG: Indecision is a huge influence for me on so many levels. I was able to catch them with Rorschach and Converge two years ago in NYC and it was awesome. I was shaking by the end of their set because they were phenomenal and they were also a band I never thought I’d have the opportunity to see.

7.How did the band form and what was the vision you had in mind?

CS: Aaron Kaczynski introduced me (Chris Smith) to Chris Grillo last year and we found we had a common goal to create a 90’s hardcore band. We got together not too long after that and started jamming together – it clicked almost instantly. We started belting out songs and then added Jack Kooser to the mix on vocals. He was a perfect fit and really tied things together. We solidified the songs and then headed into the studio and began playing shows. There was a brief hiatus last year when we first started but we jumped past that and got going.

CG: When I was living in Upstate, NY I played in multiple no name hardcore/metal based bands. More than anything I wanted to start a band that was heavily influenced by 90s hardcore. There were a few efforts made, but nothing could get off the ground. I moved to Pittsburgh two years ago and eventually met Aaron, our bass player. He then introduced me to Chris Smith. As soon as we talked about bands we loved, I knew that he was someone I should be playing music. We hit it off very well and that is what led to the incarnation of what would become Hindsight.

8.Current and or future plans? Tours or shows you’re stoked for?

CS: Just write more material, play lots of shows, and try and tour a little bit too. We are playing with Raw Nerves next week, also with Protester and Mislead Youth later on. We may very well be playing Sincerity Fest later this year along with some great bands and some bigger bands as well.

9.What is your favorite aspect of 90’s hardcore that makes it stand out for you as a great era?

CS: I grew up in Buffalo in the 80’s & 90’s and was part of the hardcore scene there. I fell in love with that style of hardcore among other forms of music of course. But I guess it just stuck with me because it was a great time for hardcore – lots of participation, diversity, and enthusiasm for the music and scenes. Same was true for 80’s hardcore, metal, and punk. Some of that participation still exists but is sometimes on a different level.

CG: For me, it was the ethics and ideals that were so prevalent in that era. I began attending shows in 2001, so I wasn’t around then. I grew up in Syracuse and moved to Oswego county, which is roughly 35 minutes away from Syracuse and began attending shows. Most of what I listened to then was garbage mosh metal bands playing bills with hardcore bands. After becoming more familiar with hardcore bands in the early 2000s, I was introduced to bands like Trial and Indecision by close friends I had made from attending shows. I eventually began looking into what those bands stood for and made strong connections between how I felt an underground culture should be.

10. We all have had moments where hindsight reveals the better path that might have been taken. What do you think is the best way to cope with that?

CG: I don’t know. That question could apply to so many different situations for so many people. I most certainly can’t say that the coping mechanisms I use are the best ones either. Regardless of how circumstances in any situation end, I feel like life always gives options to learn and grow from those experiences. No matter how difficult, confusing, or indifferent we feel about that growth or lesson that has been dropped in our laps. 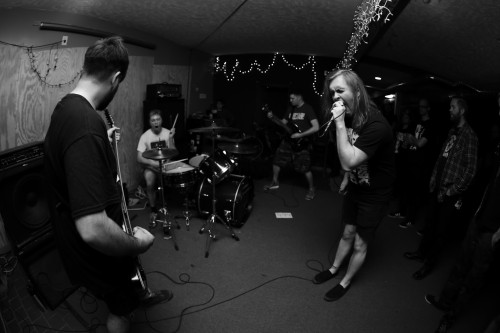